Cruzz's The More You Know

Q: what types of cover are been used on the game? 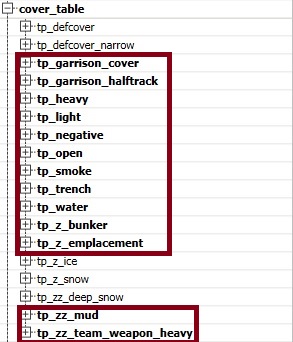 (In case anyone was wondering, defcover is the default terrain signified by grey dots)

From what i've heard, it had to do with the panzerwerfer ignoring all cover, and therefore wiping units in buildings almost instantly. Not sure if it's still around though.

British trenches are garrison cover, which panzerwerfer did full damage to

There is war spoils alpha ongoing and there is balance patch on the way.... we're having ESL and 10k active players daily with 5k peak time.

That is couple of times MORE then some MMOs.

There is not a single thing indicating any logical reason to stop or even slow the support for CoH.

We might not see another faction or big expansion, but that isn't exactly a bad thing.

HELL, friggin DoW2 just got 2 DLCs recently, one cosmetic and one playable and how old that game is?

Stop being naive and succumbing to rumors.

- necro hero in arena mode (who plays that mode ?) and cosmetic is hardly a new content

- elite mod, "the real competitive mod", made by the community fixed balanced and bugs and created a new faction, not the devs

(I've tried using exit building, and it seems that for certain buildings the default exit does not always correspond to where Partisans will spawn out from).

I'm certain units will exit out of doors at random if they are simply told to exit - such as in the case if you selected the building and told everyone to leave, or when an infiltration unit spawns and automatically exits.

If you put a USF officer in a vehicle and use it around Riflemen in combat, does it attain veterancy faster?

I can see creative usage of LT in M20 with a double zook M20 Crew if this is true.


Some if not all veterancy from tank applies to its driver so you can put riflemena squad in tank and get really easy vet 3 cause rifleme requirements are low and tanks have big veterancy value. This is also why volks vet so fast (they damage tanks)

I'm certain units will exit out of doors at random if they are simply told to exit - such as in the case if you selected the building and told everyone to leave, or when an infiltration unit spawns and automatically exits.

In "Micro Tips and Tricks - Episode III" from tightrobe he demonstrates that there is always a default exit. If you want to mine a building versus infiltration troops you just have to mine the default entrance. If you are curious which door is the default exit point just hit "Q" (when using grid hotkeys) when having a unit in a building. You can watch the Video at the Trending section. His videos are great and always worth a look.

Cruzz can you look into the Panthers hitbox model. People are saying
"After doing some testing using the t-34, is-2, isu-152, and panther I can confirm that the panther has a 75% front and 25% rear armor profile for most at weapons. Larger shells seem to hit rear armor even when aimed at the 50% area. These weapons are found on the is-2 and isu-152. Smaller weapons like t-34, panther, at guns have to hit behind the S in this picture for rear armor"
http://steamcommunity.com/sharedfiles/filedetails/?id=688156718
Earlier you said that its a 50:50 split like every other vehicle.

Cruzz can you look into the Panthers hitbox model.

The actual model and the hitbox can be of different sizes. Testing using the model as reference can be mislead, you have to also check the placement of the hitbox with in the model....

Where is Cruzz these days? Havent heard from him in ages...

I'm trying to implement my own homebrewn dps calculator for squads.

ready_aim_time is the time before firing on a new target if I remember correctly...

Accuracy, penetration chance are capped at 1. Burst duration for non burst weapons is 0.125 (this game generally operates on 8 ticks a second, any amount of time is rounded to the closest 0.125). You will have to adjust rate of fire, burst duration, accuracy, cooldown and reload duration all with range. The one -cooldown is because there won't be a cooldown after the last burst before a reload.


Both formulas basically, say the same thing (Cruzz's formula is a spiffy spinoff that allows us to factor ready_aim_time into DPS). Let' refer to Cruzz formula terminology for now.

I have 3 clarification questions, and I would like to know if somebody could answer them for me:

The idea is that the 1st bullet always fires immediately, whereas the rest of the bullets have a delay of 1/rof between them.

2. Does the duration of "burst duration" change depending on the actual number of bullets fired?

i.e., Suppose:
- Burst duration is equal to 5 secs
- 5 seconds is enough to fire 6 bullets. but not 7 bullets
- It actually takes 4.5 seconds to fire those 6 bullets

Now, my question is:
- Does the burst stop when the last bullet is fired (after 4.5 secs) -- so the wind-down starts earlier?
- Or does the burst use up the whole duration? (i.e., the gun remains idle for 0.5 seconds)

I know that my question seems like nitpicking; however I think I have discovered certain weapons that are very sensitive to this discretization effect (e.g., Vickers_k when the UC is moving).
- This is all weapons with lowish ROF during their small-ish bursts, and no randomization between rof and burst_duration
- their dps looks like a sawtooth

3. I have absolutely no idea how incremental accuracy works at all.

4. When I have both "multiplication" and "addition" veterancy modifiers that apply to the same stat.

Am I right to assume that I should first apply the multiplication modifiers, and then the addition modifiers?

3. I have absolutely no idea how incremental accuracy works at all.


Pretty sure it's a multiplier that is multiplied again for each model in the firing arc.

Pretty sure it's a multiplier that is multiplied again for each model in the firing arc.

Also, with respect to the same modifier, what do the search radius for "near/mid/far" stand for?

Also, with respect to the same modifier, what do the search radius for "near/mid/far" stand for?

Should be, yes. HMGs use incremental suppression similarly as well and is based on models instead of squads too.

Not sure. It would sound like to me that it would matter if incremental accuracy gains more while more enemies are closer inside its firing arc instead of farther, but I'm pretty sure that doesn't exist. Might be vestigial.

For whom it may concern, June 22 patch thingies:

USF 81mm mortar (also affects mortar HT) has 106 range (same as 120mm), fastest firing mortar in the game with a 1.6 sec advantage over ostheer one, and about half the scatter of any other mortar in the game plus scatter reduction veterancy at vet1 and vet2.

Schumines still have an engine destroy chance of 33%.

.50 cal will lose its new penetration bonuses upon reaching vet2. EDIT: Or would, but the vet2 weapon change that used to give it faster redeploy has been broken by one of the recent patches, so in the end it does keep its penetration through all vet levels.

JagdTiger will no longer get stunned by IS2, Relic accidentally deleted that part of the deflection as well.

For that matter Brummbär and ISU152 were not changed in terms of deflection stuns, so it only affected IS2, Tiger I(+Ace) and King Tiger.

SturmTiger can't get abandoned while reloading if its between 75% and 50% health because Relic removed one of the abandon checks.