As some of you know, we with Kasarov created pack of adjusted commander portraits for the CoH2. More detailed information you can find there: https://www.coh2.org/topic/105654/adjusted-commander-portraits

Question is simple. If it was possible, do you want to see them in the game?
Some commanders will be updated to match with new ability roaster, since announced commanders patch is huge.

Some comparison pictures, created by Sander93 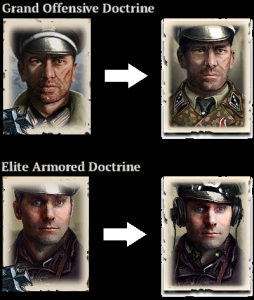 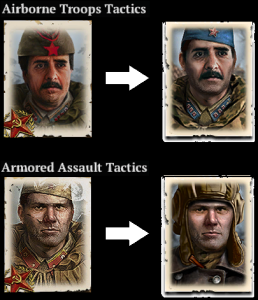 Main goal - standartisation in location, colors, and used assets on the portrait, so you can clearly recognise type of the commander.
Here are two examples with Tiger and Guards commanders. As you can see, they now have a standardised look (coat/cape) for the key commander ability/theme.

This thread is for vote.

I like the original soviet commander portraits because of their serious, unsaturated, gritty, and almost boring feel.

I do not like the oversaturation of soviet commanders. They have too much color.

Big +1 for the Ostheer commanders, especially because they look so slick and organized unlike the current mess we have right now.

It's an alright system if you have a small number of Commanders, you can get an idea of who has what by their uniforms and such. CoH2, mostly Ostheer and Soviets, just have way too many and most of them are just guys in officer uniforms.

Nice stuff, I would love to see these changes.

Relic should be paying you for this, holy shit.

This is some really high quality stuff and I also really like your idea for the categorization of commanders as well.

Albeit there's the problem of a unit being removed or added to them with that.

So for example if the commander on the portrait has binoculars but his artillery gets removed then yeah...

But otherwise the new portraits are just more uniform and look superbly.

Love the theme between Tiger/Guards commanders. Hell yes all around

This shouldn't even be discussed. In the game with them, now.

I asked for it a while back. So yes please

Yes, these are great.

Although I love the portraits and the idea it might be going a bit to far.

I would agree with change that made Tiger commander to have tank crew uniform or Artillery commanders to wear artillery uniforms but imo that is enough.

its looks amazing, so definitely yes

Would like to see them in game and voted yes.

Really like them and hope to see them going live.

I think polishing the existing ones many of which are off-position or have inconsistent filters applied to them (all previous commander patch portraits) would be a much more acceptable proposition to Relic.
PAGES (2)