since there is a bit of a lull in the patchcycle while we wait for the big tournament to end, I thought this would be a good time to update the list of known bugs and issues, so that we can try to fix as many as possible next patch.

Please use this thread to report bugs, and I'll try to keep the OP updated as reports come in. Please have a look at the list in the OP before posting, to avoid the same issues getting reported repeatedly.

When reporting a bug, please be as elaborate as possible. Try to add (possible) circumstances under which the bug occurred so that it's easier for us to replicate the bug and figure out the cause. Adding screenshots/clips/replays is a great help.


(If a mod could make this a sticky, that'd be great)

OKW
- Panzerfusilier Model 24 grenade AOE accidentally wasn't changed. Needs to be changed to 1/2/3
- When Sturm Offizier's Forced Retreat is used on an HMG that is already trying to retreat (packing up), it retreats at 2x the retreat speed
- Falls in camo bug out when having to turn around (they turn in steps and camo applies/disapplies continuously)
- Obersoldaten IR STG44 "T-pose"
- Panzerfusiliers single Shreck re-upgrade still not working properly (only G43 upgrade is, unintentionally, available)
- OKW LefH 18 being recrewed "spawns" an Ostheer LefH 18 with only 3 levels of veterancy

USF
- M2HB has 0.5 (?) RA on retreat instead of 0.4
- Support Paratroopers in camo bug out when having to turn around (they turn in steps and camo applies/disapplies continuously)
- Combined Arms sometimes activates in situations it shouldn't. Apparently influenced by proximity of tanks to the center of the map (?) and the amount of tanks with crew near each other
-


SOV
- B4 target size needs to be changed to 20 like all other howitzers
- Maxim runs slightly faster on retreat than other HMGs?
- Issues with ML-20 not being able to fire after cooldown?
- Soviet tier structure deform:
- Conscripts merged with Airborne Guards do carry over the proper weapon, same for Assault Guards (no Thompsons)
- KV-1 Hull Down ability does not sink the tank, causing the sandbags to misalign
- KV-8 prioritize vehicles not working properly
-


UKF
- Commandos vet 3 retreat smoke makes them invulnerable to explosive weapons
- Brit trenches become like 1 target size when there’s a unit inside and ATGs/tanks can’t hit them properly
- Forward Assembly not showing up in FoW after having spotted it
- Churchill Crocodile flamethrower is hardpoint 1 and gun is hardpoint 2, causing the Puma Aimed Shot to not deal the turret traverse lock
- UKF Recovery Sappers lose their equipment once the model dies. Reinforced models do not spawn with equipment and new equipment can not be purchased.
- Some British abilities not working properly on Oka River Winter map [not sure which]
-


OST
- Tiger Ace Spearhead ability uses coaxial MG instead of hull MG to deal suppression
- Panzergrenadier smoke nade needs a standardized location for grid key users. (First row, third slot with Infantry Doctrine's combat package; Second row, first slot with Infantry Doctrine's combat package and Schrecks (IMO best location); Third row, second slot with the new Strategic Reserves commander)
- Sometimes LeFH does not turn and fire when ordered to with the Artillery Officer's Coordinated Artillery Barrage (reason unknown at this time, it worked in simple tests; replays appreciated)
- Incorrect icon used for Hull Down (uses KV-1) [on units?]
- 251 does not obey handbrake command
- GrW 34 Counter Barrage available while not set up, while unit in that state with ability activated will not commence firing
- Hotkey overlap issue with Puma and 222 in Ostheer T2
- Pioneer and Grenadier medkit ability is instantly re-usable despite being on cooldown (cooldown animation shows up but doesn't disable use) after use
-

Can you fix the campaign Tiger mission where the tank has heavy engine damage and moves like my grandma?

- Maxim runs slightly faster on retreat than other HMGs?

Lefh counter barrage/barrage does not fire some times.

Officers do not have grenades/smoke grenades barrages on the same cool-down.

Can you fix the campaign Tiger mission where the tank has heavy engine damage and moves like my grandma?

Campaign issues are very hard to deal with because Relic devs originally apparently randomly used singleplayer and multiplayer units, abilities and effects, rather than having them completely separated, which means that whenever we change things for multiplayer there's a chance it accidentally breaks something in the campaigns. The heavy engine damage bug was looked into, I believe it can be fixed by implementing scripts, but I'm not sure how far we got last time. It's definitely a known issue.

1. When Panzergrenadiers use Mark Target against a retreating squad, it completely locks up the Panzergrenadier squad for the duration of the ability.
2. LefH Counterbarrage should be 332,5 range instead of 250. Counterbarrage doesn't scale with veterancy, which is not communicated to the player, so at vet 3, counterbarrage has less range than the howitzer shooting arc shows.

These two bugs have been resolved with the patch I'm pretty sure.

The ML20 Cooldown does not display properly on the ability button when it hits vet 1. It says "1 second remaining" and the cooldown bar is stuck at the bottom for an extended period of time.

Unsure if this is affecting how long it actually is supposed to take to reload or if this is just a GUI issue.

Tank Hunter in general should be looked at. Fixing the PTAB and adding T34/85s should make it viable at last.

1. Soviet sergant model is bugged when used as crew and doesn't have winter variant. Since visual bugs are here, i think this one should be fixed too.
https://www.coh2.org/topic/100258/sergant-model-is-bugged
2. Spotting scope doesn'thave any indicator, when working

Ostheer Spotting scopes don't have any indicator when activated. 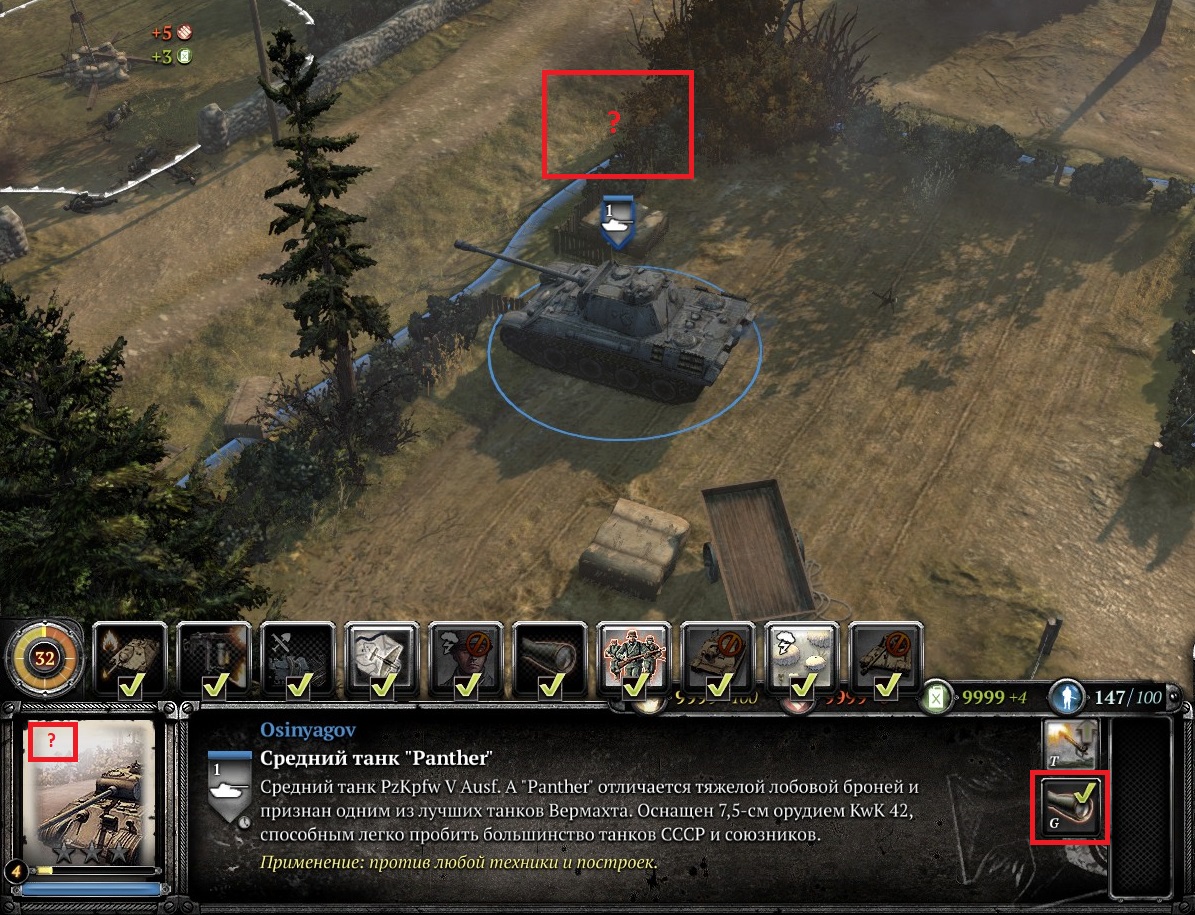 To prevent new issues with lack of text strings - portrait indicator required at least three variants
1. for 251
2. for 222
3. for other vehicles
Reason - different affect
Fittable icon - same as used for spotting scopes upgrade.

Also, it can get symbol above vehicle as addition. Fittable symbol used by OKW vehicles, when they got vet 4 (iirc panther and panzer IV J)

4. Penals don't get neither PPSh-41 or munitions, when picking up the ammo crate. Wasted 90 Munitions before spoiled it. If they pick up two crates, they losing PTRS-41 upgrade at all.

This one i haven't seen since end of september, but i haven't used this doctrine a lot as well.

5. Conscripts, merged with airbourne guards running without weapon, or with SVT-40 (even when squad got pack with PPSh-41)


6. Some doctrines have wrong order of abilities

9. KV-1 not diging in, like Ostheer vehicles. And because of that all sandbags are inside him

4. If conscripts merged with Assault guards, they will have nothing insted of Thompsons


About coordinated fire for Ostheer. There is a thread about this ability, which mentioning issues with it: JP4 seem to some times not autofire when cloaked, may have to do with a change in the "weapon" if I remember correctly there was a similar issue when other vehicles switched weapons.

Ober have suppression on their k98 maybe move it to M34/st44 or the ability instead.

There was also some bugs with Ardennes Assault since USF got the revamp.

1. Pathfinders are always unavailable even if you have lt tech


Thanks for all the hard work guys.

Now that I’ve exploited it I can tell the mod team about it.

Strategic Reserves breaks Theatre of War badly. Panzer IV J and Tiger Ace wipe the floor with everything, even though only 1941 vehicles are allowed.

Recrew Pak43 destruct will clone a recrew squad
Fusserlier upgrade PanzerSchreck and when lost one of them,will unlock G43 upgrade not single schreck
Volks not have vet bouns at vet 4
OKW recrew 105 howitzer highest vet is 3 not 5

I played with infiltration commandos lately and they 100% have an icon that tells you they are bren experts. Maybe the regular commandos dont have it by accident?

EDIT
Just checked, they both have it. It's right next to the hold fire button

I played with infiltration commandos lately and they 100% have an icon that tells you they are bren experts. Maybe the regular commandos dont have it by accident?

EDIT
Just checked, they both have it. It's right next to the hold fire button

Yea you are right, now I remembered I saw it in game but did not see it in the patch notes but got confused and thought it was the other way round. Thanks for clarifying.