Their Kickstarter video have a muppet in it at 2:22

I'm good with this

Permanently Banned
Presentation FailFish NotLikeThis worst thing that i see, after this i dont feeling to buy game. Even Relic have in some part better patch presentation.

Presentation FailFish NotLikeThis worst thing that i see, after this i dont feeling to buy game. Even Relic have in some part better patch presentation.

Honestly after Relic left their skeleton crew to deal with CoH2, and how they dealt with DoW3, whatever these guys make will surely come out better than anything Relic will make in the future, I'm sure of it.

It's sad when the company that created the formula want to change it so much that they're ready to literally destroy it while someone else picks it up and does it a bit differently while sticking to it's core, this is a clear sign to me that Relic has just sadly lost it's touch, and this is evident it's not like I'm making anything of it up or that I'm just a random internet troll that likes to point fingers at Relic.

Relic were the greatest company to me back when I was a kid and played CoH, I'm not even joking.

I even remember telling my father while we were in the car that I don't think there could be anything better than CoH made, and then he suggested that modifying the game and perhaps the formula could maybe make something different if not better, and he was right for the most part if I'm honest, the modders have proved this, all that is left for these guys is to prove the other half of his theory.

Honestly after Relic left their skeleton crew to deal with CoH2, and how they dealt with DoW3, whatever these guys make will surely come out better than anything Relic will make in the future, I'm sure of it.

"New Relic" leaders cognitive dissonance and their big ego will always distort and protect them from facing "South Park" reality; 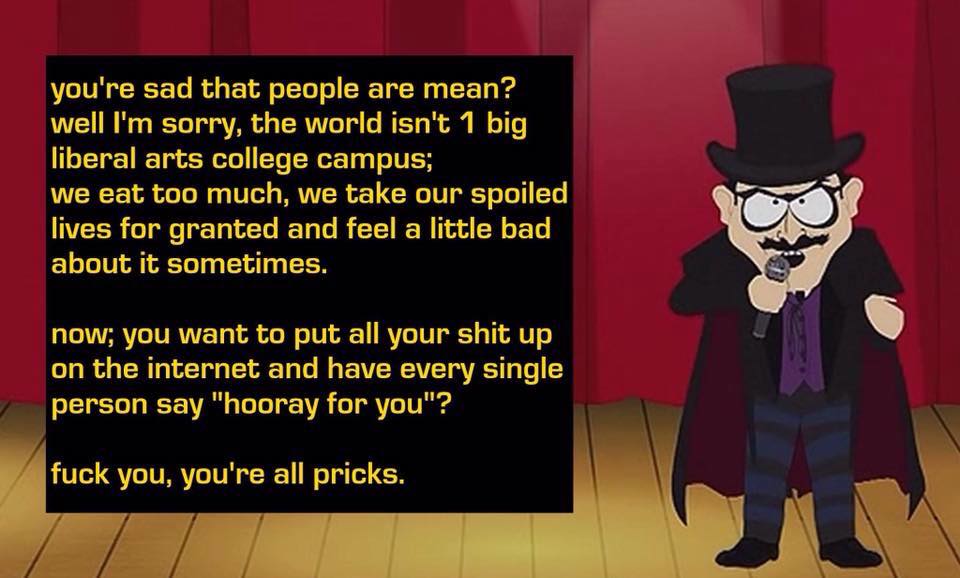 "New Relic" is ruled by soft-skinned leaders so rather than admit to their mistakes and get on a learning curve. They prefer lying to themselves and that eliminates any accountability of their actions.

As I have said in previous posts, there are two kinds of leadership. Those that are on a learning curve (require a thick skin) and those that don't want to face their mirror. If all fails, they will just deflect blame away from themselves. Yes, I think "New Relic" is playing Sega with all their smooth-talking BS. Sega should start hiring more international-minded Relic studio leaders that don't suffer from Vancouver/Canada fanboyism.

I suppose we should offer to make a forum for them.

I'm still on the fence about this game tho, not quite sure what to make of it after seeing the gameplay footage. It looks like and even more simplistic version of COH1 but with robots.

Good idea. Some more competition to CoH2/"New Relic" is a good thing.

https://www.pcgamer.com/we-dont-feel-anything-is-off-the-table-says-sega-on-growing-its-pc-catalogue/
PC Gamer: As part of your Searchlight program, you're looking for developers to collaborate with. You just announced a collaboration with Two Point Studios, with former Lionhead staff Mark Webley and Gary Carr. What can we expect from that?

John Clark: We released a game called Motorsport Manager with Playsport Games and they're a very talented startup—industry experts, great developers, just wanting to bring a vision and develop this franchise and develop this community.

Same with Two Point—a group of veterans which are starting up, ex-Bullfrog, ex-Lionhead. They have their vision, they have a vision which aligns with [the] principles we’ve got in franchise building and developing community and delivering really strong, valuable experiences.

What was the process behind signing Two Point? Did they approach you, did you scout them out? How does that conversation start?

A bit of both, really. So we have our A&R (artists and repertoire) guys, we’re constantly coming to shows such as [E3] and others where we’re always talking to developers, to people who know developers, and to channel partners who say “these guys over here, they’re doing something really, really cool.” We just keep talking to people and telling them what is driving us at Sega and we do end up finding some really, really cool opportunities.

And we’re looking to do more of that. We’ve started our relationship with Playsport Games and we’ve released a game and we want to work on more and build a franchise together with them. We hope to get to the stage with Two Point where we’ll launch a fantastic gaming experience and we’re really excited—we’re not saying what it looks like at this stage, but we think that that’s going to be the start of something big to come.

It's obvious the leadership behind Iron Harvest respect CoH fans more than "New Relic".
If only this small indie studio had the same resources and support from Sega as Relic, Kingart Games could do great things in the future.

If only this small indie studio had the same resources and support from Sega as Relic, Kingart Games could do great things in the future.

Side note: UBoot (on steam) is also being developed by a Polish Studio

So far the ideas look pretty goofy to me, but I'd be willing to give a fair shot.

As long as they change the sound effect for clicking. It's quite grating.

A little update. They confirmed that multiplayer will be a part of the game regardless of kickstarter goals/funding.
https://www.kickstarter.com/projects/kingartgames/iron-harvest/posts/2136314

Co-op campaign goal got reached too.

All goal unlocked except the last. 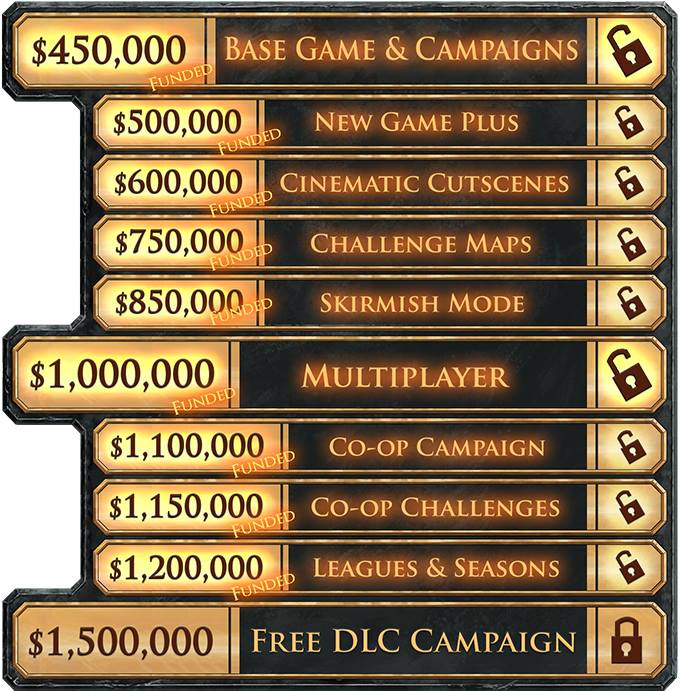 And now they have unlocked all of them.

They have the money, now we can only hope we'll have a good game.

And now they have unlocked all of them.

They have the money, now we can only hope we'll have a good game.

I'm excited for this. I didn't donate cuz that's not really my thing but if the reviews are good and the studio delivers on their product, they're going to have high sales and high player retention.

well, IMO buying pre-order or similar thing to this like the kickstarter they've... started is RNG imo as the pre-vids of the game always looks good but with the release they can be realy shit, like it was with CoH2, good hype before start, and many people were disappointed with the release

well, IMO buying pre-order or similar thing to this like the kickstarter they've... started is RNG imo as the pre-vids of the game always looks good but with the release they can be realy shit, like it was with CoH2, good hype before start, and many people were disappointed with the release

As soon as the first information about the game appeared, its was very interested me. But after seeing the first gameplay video, I realized that the game would not be as good as I'd like: the game looks super simplistic and it's all because it's developed in the same way for consoles.

Every kickstarter backing and pre-order purchase has a risk but I think the transparency of the devs is really refreshing. Their current goals seem to follow the results they got from their RTS survey, like the emphasis on really great RTS campaigns. Their considerable interest in community feedback from the first steps and openness to new ideas and mechanics from the backers and the community is a huge plus for me personally.

They also mentioned they're not ashamed to stand on the shoulders of giants and will implement well working tried and tested mechanics from other games like the cover usage of CoH and Hero units from Warcraft 3. I hope this will help avoid the need to create some sort of a new niche game like a MOBA-RTS hybrid

I hope they continue to be as active in their Discord, Kickstarter comments, Facebook etc and interact with the community even on their spare time as has been the case so far. That will help create a healthy dev-community relationship and ensures good communication both ways and a friendly relaxed atmosphere.

It also seems that even from alpha stages streaming and content creating is allowed and encouraged so people have a lot of time to form their impressions of the game before final release. Also community feedback could be used to implement good new mechanics and scrap questionable ones well before release when changes are much easier to make. Once again I think such transparency about the development and the passion they have in showing their content is going to be an excellent P.R. move.

We redesigned the Polania infantry units for Iron Harvest.

We had four goals: The role/class of each unit must be obvious, their look must match the story/setting, all the units should visually belong to the same faction and they must all be easily visible in-game.

Edit: The Polania faction in the game is a "rebel army". Resistance fighters. Former soldiers and civilians without state backing.

What do you think? The next step is modelling the units in 3D. 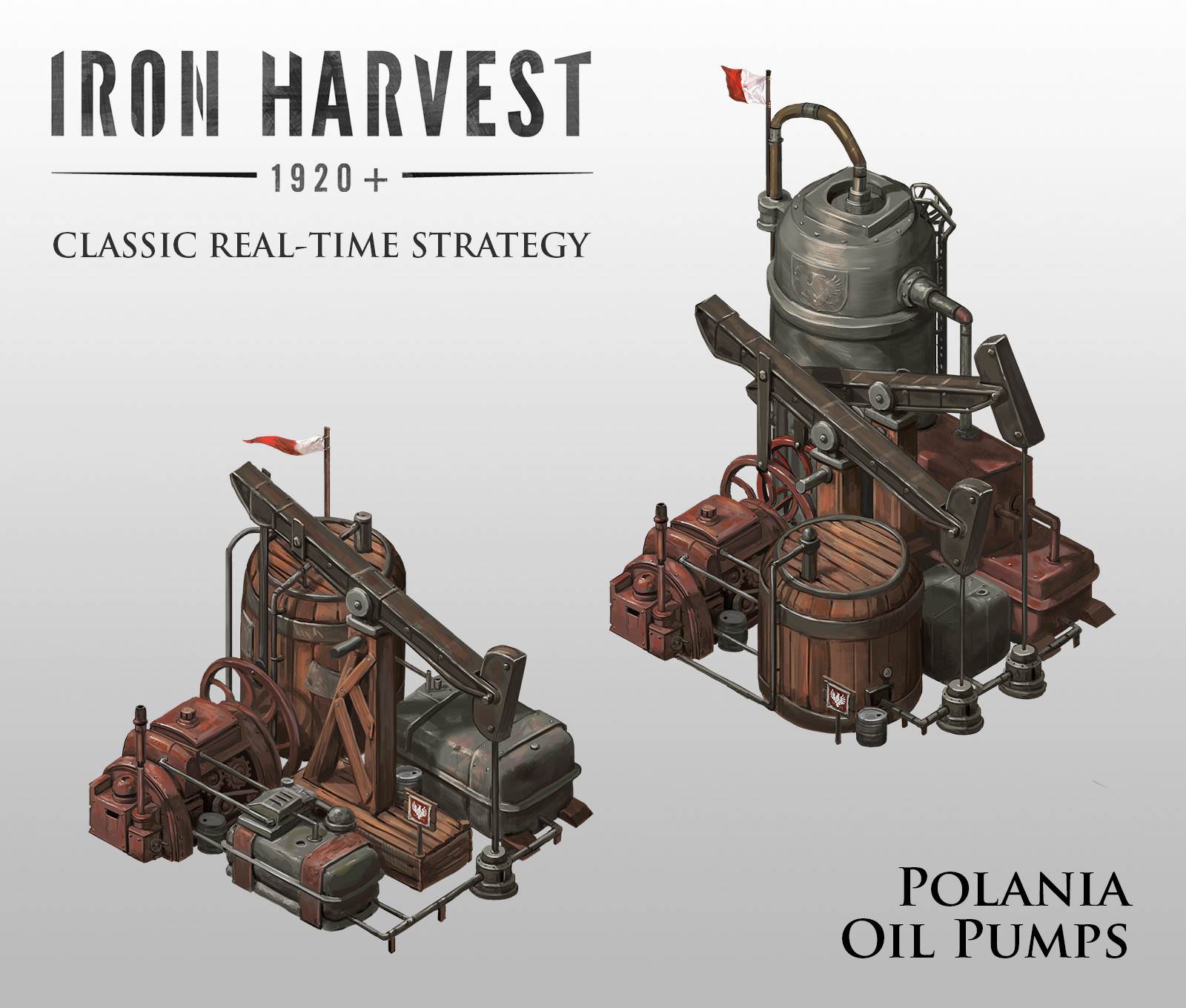 In Iron Harvest you gather resources by conquering and defending resource buildings.

This is the concept art of Polania Oil Pumps (normal and upgraded versions). We'll add those and Iron Mines for the Alpha 1 end of July.