Title says it all; I'm wondering what maps people like the most, past or present. Are or were they perfect? What would you want changed to have made the map go from good to great?

Isn't that dependent in faction?

Could've made this into a poll?

Though my standard veto's go to Vaux, Moscow & Kharkov. The rest is ok-ish, just what vipper says mostly depends on the faction (but I always use the same vetoes).

Just thought I would post a couple notes here from when I was making 2v2 maps for people (I do not play 2v2, most of the maps suck too bad).

Of course you will have two camps: Campers and Blobbers. Campers will like skinny head to head battle maps like Kharkov. Blobbers will prefer larger maps like Vaux or Moscow.

But the key design elements for a good 2v2 map were defined to me as:
- Safe fuel. If you get a bad rando partner you dont want to be without fuel all game long.

- Strong fuel cutoff to force the enemy to move. Should be pretty far from the enemies base so they need to move to respond to its attack. It is also best to have some blockers between the fuel area and the cutoff.

- A decent base to base distance so units are not off the map for long periods of time. Belgorod feels pretty good, where Rails and Metal seems to long. If the map is too short snipers will be in your face all game long with short retreats.

- A map that is wide enough to flank. Belgorod for instance was much wider at first but players asked for it to be made smaller. Belgorod is pretty open and easy to move around in so it almost feels too small and laney to some players now. So you need a combination of size and blockers to get the width to feel just right. Moscow Outskirts and Vaux are way too big to me personally.

- Dont make the VP area large enough it can be locked down with the USF Major. But make them large enough OKW cant park the Shwere right on it.

- And just like a 4v4 map, the middle VP may get very busy late game. So do not make that area too small and hard to move around in. I would use Elst Outskirts as an example here with all of the hedgerows around the center VP. If it were a touch bigger may be better.


Thee are just the things that popped up during the process. A good map is a good map. There are no metrics to describe it. It just flows well and does not support a campy style.

But there are other things that are important like munition placement. Or perhaps a safe/protected territory point for making a cache to give players options. And of course base entrances that give you good retreat paths.

Since I do not play 2v2 my opinions on maps are meaningless, but I know people will disagree with me and get a conversation started for your question. As a mapper I think these particular maps are good examples of things. 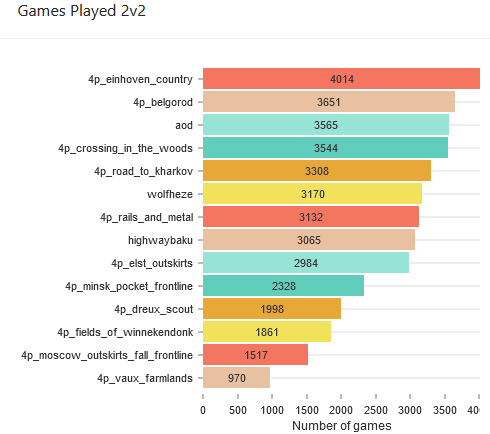 - Eindhoven is an enigma. The map is pretty big and has an interesting design. So on paper it would not be a favorite. In fact it was removed from the game because it had a couple issues like hills etc. With those little issues fixed it went from removed to the most played and well liked map. This is an example of a map that just plays really well. It has the X factor that makes it fun. It also is said to be pretty balanced across factions, etc. It has a good balance of Open and close quarters in my opinion.

- Belgorod - I like the size, fuels, cutoffs, etc. It could maybe use a few more sight blockers to make it less lane based.

- AOD - Map seems to have a great size, fuels, and cutoffs. If I had to complain I would say too much green cover in mid and it is very open in mid but very close quarters right outside the base area. I would probably move a couple blockers more towards mid. WF is always updating the details like cover around the fuels, etc so it will just keep getting better.

- Crossing in the woods - Too open and maybe too short of a base to base distance so snipers and arty become OP. Changing some sight blockers around the middle could make this a lot better.

- Kharkov - Too thin and red cover exposed cutoffs. Weird fuel placements with buildings right on them. This map has an X factor that makes it fun to play. Mostly the middle building cat and mouse games and the open middle that lets early flanks work. But it is so narrow those lanes disappear fast.

- Wolfheze - A little short base to base. Many players complain about a single hedgerow section being a sight blocker so they get confused about where they can see. Could be two hedges or maybe add a small tree to make them stand out better. Could use more sight blockers between the bases and middle areas.

- Rails and Metal - Too long and narrow. Weird building and green cover placement. Horrible pathing with large sections of the map being totally cutoff. So moving around is a nightmare. It is impossible to make fun tactical moves.

- Elst does a lot of great things and top players like this map. It has a close quarters design that lets players be constantly moving. I feel it is too close quarters personally. And this may be why in general it does not see the amount of plays as other maps.

Eindhoven is always the most played map. The next three alternate popularity. AOD, Belgorod, and Crossing will be the number two map from week to week. Those seem to be the four most popular from PagePs top 200 games stats.

- Dreux and Baku are heavily Axis favored. I've ban them as USF and I almost never see allies win on them. Shwerers on those map can completely lock areas from flanking with little risk of being rushed by atgun. On Baku it is even worst since your indirect fire units are virtually unreachable behind the wall with a shwerer next to them.

- Kharkov is bad, but better since its last revamp. Again Shwerer can lock down flanking route with little risk. Upper side is almost an instant lose vs Axis seeing how they can rush and lock down the cutoff so easily.

- Vaux while being large has a shitty design for the fuel point. 1 HMG can lock down each point until tank hit the field and cutoff are too far behind.

- Rail is Rail, I don't know how it has even been added to the map pool.


- AoD is heavily axis favored, too narrow, too much green cover to block any flanking path and this new cover 'design' so defenders are on green but attackers on yellow... I can understand it on some specific areas close to bases but putting it everywhere is just shitty design.

Then any map where fuel is in the middle/angle edge is badly design per essence. AoD, Vaux, Crossing(2v2), Rail.

Vaux farmland is actually one of the best maps in the pool. Not too straight forward and fast rotating manuvers are possible over the whole map.

It is maybe the most unique map in the pool

Crossing should be removed from 2v2. It's a proper 1v1 size map.

Rails is just annoying because of how narrow the map is and how the fuels are placed.

Karkov is bad because its not only narrow but small in general.

I feel like Elst Outskirts would be better with better fuel placements.

I like new maps, except Wolfheze. Elst is alright, but not a fan of the how fuel is designed, especially the top one. Crossing is a bit braindead, but passable. AoD can be annoying as allies and fuel is too easy to lock down. Eindhoven is good, but the no UI bug that very rarely occurs there is rather rage inducing. Kharkov is all over the place, but imo playable.

Winnekodonk, Vaux, Rails and especially Minsk (I think I played like 6 times on that map, horrible 3 lanes map) are my default bans for both factions. Imo, balance team should have left Poltava and kicked the Minsk out. At least Poltava was crazy enough to be somewhat enjoyable. Kind of want to add Moscow there, although it can be quite fun from time to time.

Eindhoven is great, VPs and resource points are well placed, the map offers different regions for different playstyles and has a good width ratio. Cut offs could be a tiny bit more accessible in my opinion but also in the current state they work very well.

Moscow: I like the map, although it disvfavours Soviet Conscript builds due to the overall large ranges.

Crossing: I don't like it. It is has to transition between map areas to support each other.

Vaux: Fuels are too easy to lock down with an MG, and retreat paths can be odd. I like the battle in the middle part of the map though, but rarely play it.

Wolfheze: Engagement distances are too far and heavily favour long range engagements. Also the map feels "the same" on all parts of the map except for maybe the houses near the middle. Design wise not albeit not great, but just boring to play because it is uninteresting.

Winnekendonk: I'd also count it as a good map. The village in the corner freshens things up. I find it a bit hard to push fuel in general though.

Rails and Metal, Karkhov: Suffer similar issues: Narrow and long, it's just a huge slugfest. I don't like it.

I like new maps, except Wolfheze. Elst is alright, but not a fan of the how fuel is designed, especially the top one. Crossing is a bit braindead, but passable. AoD can be annoying as allies and fuel is too easy to lock down. Eindhoven is good, but the no UI bug that very rarely occurs there is rather rage inducing. Kharkov is all over the place, but imo playable.

Winnekodonk, Vaux, Rails and especially Minsk (I think I played like 6 times on that map, horrible 3 lanes map) are my default bans for both factions. Imo, balance team should have left Poltava and kicked the Minsk out. At least Poltava was crazy enough to be somewhat enjoyable. Kind of want to add Moscow there, although it can be quite fun from time to time.

Wolfheze is easily the worst map in the pool right now.

Both fuels are back to back and whoever is lucky enough to put an mg in the house near point controls fuel production for at least 10 minutes.

It is ridiculous.
PAGES (1)