And how we are supposed to counter that

No ideas yet, but That's why it need feedbacks, isn't it ?

And how we are supposed to counter that

This Commander is late game focus, so fist thing you can do is gaining advantage in early to mid game, make use of UKF early game weakness.

If the game come to later stage, assuming ukf player can built up an idea formation of a churchill cs, a firefly and an aec command vehicle. With the same amount of resources, you can afford 2 panther and focus down the firefly, or simply go ele/jagtiger to hard counter all of his armor. As okw, you also have the option of spamming jagpanzer and focus the firefly.

If he go for more than 1 churchill or firefly, the remain pop wont allow a large infantry force so you can gain more map control by spread out and avoid fighting head on with his main force.

This will be insta meta.

The StuG E is Currently very underwhelming compared to the Scott or Ostwind. Give it a he and smoke barrage with the same stats as the Scott to help differentiate it from the Ostwind, allowing it to function as a support unit compared to the more frontline Ostwind


Too munitions intensive. 4 of those abilities are muni abilities, and one of them is a muni hungry squad. Should probably break that up by replacing one of the abilities with a passive.

2/3cp. Mechanized rifle squad. Riflemen that arrive in m3 halftrack and are armed with 2 m1919s

Too munitions intensive. 4 of those abilities are muni abilities, and one of them is a muni hungry squad. Should probably break that up by replacing one of the abilities with a passive.

https://frontline44.willherzog.net
Most of the reworked commanders are just bullseye

Edit:
Also the mod with the reworked commanders from CoH1 are just awesome.

Here is my idea for German Mechanized doctrine. I think as an early game light vehicle doc with a lategame vision and exploitation of vision focus it could be viable as well as function a lot different to most doctrines.

Here is my idea for German Mechanized doctrine. I think as an early game light vehicle doc with a lategame vision and exploitation of vision focus it could be viable as well as function a lot different to most doctrines.

I like it. Commanders should be like this, really strong at a specific thing, not just generally good at everything (Heavy Cav, grand offensive, etc.)

0 CP 250 halftrack sidetech to get same timing as wehr


Oi get a new name m8, that one is taken, im surprised you haven't notice 'THE Grand Offensive' doctrine MVGame

Here's an idea: an aggressive, tank offense oriented commander for the USF that offers virtually no defensive benefit, and can honestly be boiled down to "I have a plan. Attack."

The commander is mostly geared towards the idea of taking control of the battle early on with your normal infantry and Cavalry Riflemen, then eventually start rolling out Easy Eights and other tanks in the late game that will vet faster thanks to Elite Vehicle Crews. The M26 Pershing would be the cherry on top of your armored spearhead, and the P-47 Rocket Strafe could potentially turn the tide of any armored engagement you find yourself in.

However, the commander would obviously lack in some critical aspects, namely with the lack of off-map artillery and lack of unit-enhancing abilities, like 'Combined Arms' or 'For Mother Russia'. 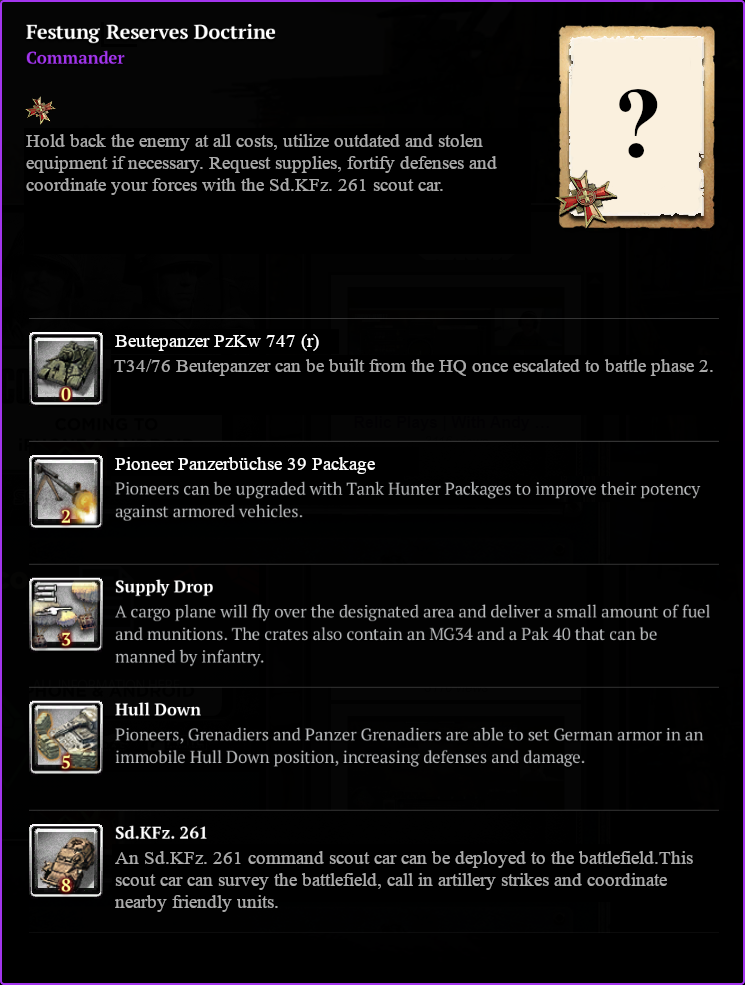 1v1 / 2v2:
The doctrine provides early anti light vehicle measurements via the panzerbüchses and an early generalist tank. The supply drop can always come in handy in emergency. Use the 261's artillery call to force anti tank guns to reposition in the late game.

3v3 / 4v4:
The panzerbüchse and T34 have less impact there. Use the supply drop to aid your allies (typically giving pak 40 to okw). You have two options with the 261: use it as forward retreat point or use it near hulled down tanks, combining their increased range and the scout car's sight to cover a large area.

3cp. Skijäger squad. 5 man squad of skijägers (use sniper model) that are armed with kar 98. Can use sprint, m24 stick hand nade, interrogation and flares. Can be upgraded with 3 stgs ( or mp 40s if you find stgs repulsive idea) and double mg 42. Cost 380- 400 mp.
5cp spotting scopes

6cp. For the fatherland or assault and hold

4cp: Scorched Earth (completely disable a strategic point, rendering it unusable. Neither side can capture that point without first sending engineering units in to repair it - a long and tedious process.)

10cp: Sector Artillery (Allows targeting a non-enemy sector for off-map artillery fire. For the duration of the effect, any enemy unit spotted within that sector's boundaries will be continously bombarded by a slow but accurate artillery volley, until it is destroyed or disappears from sight.)