I am happy to announce a new app desktop app.
You can think about this app as a new "Mako Celo"

This map has 2 main goals:

Download the app from here https://coh2stats.com/desktop-app
Documentation and instruction how to setup the streamer mode. 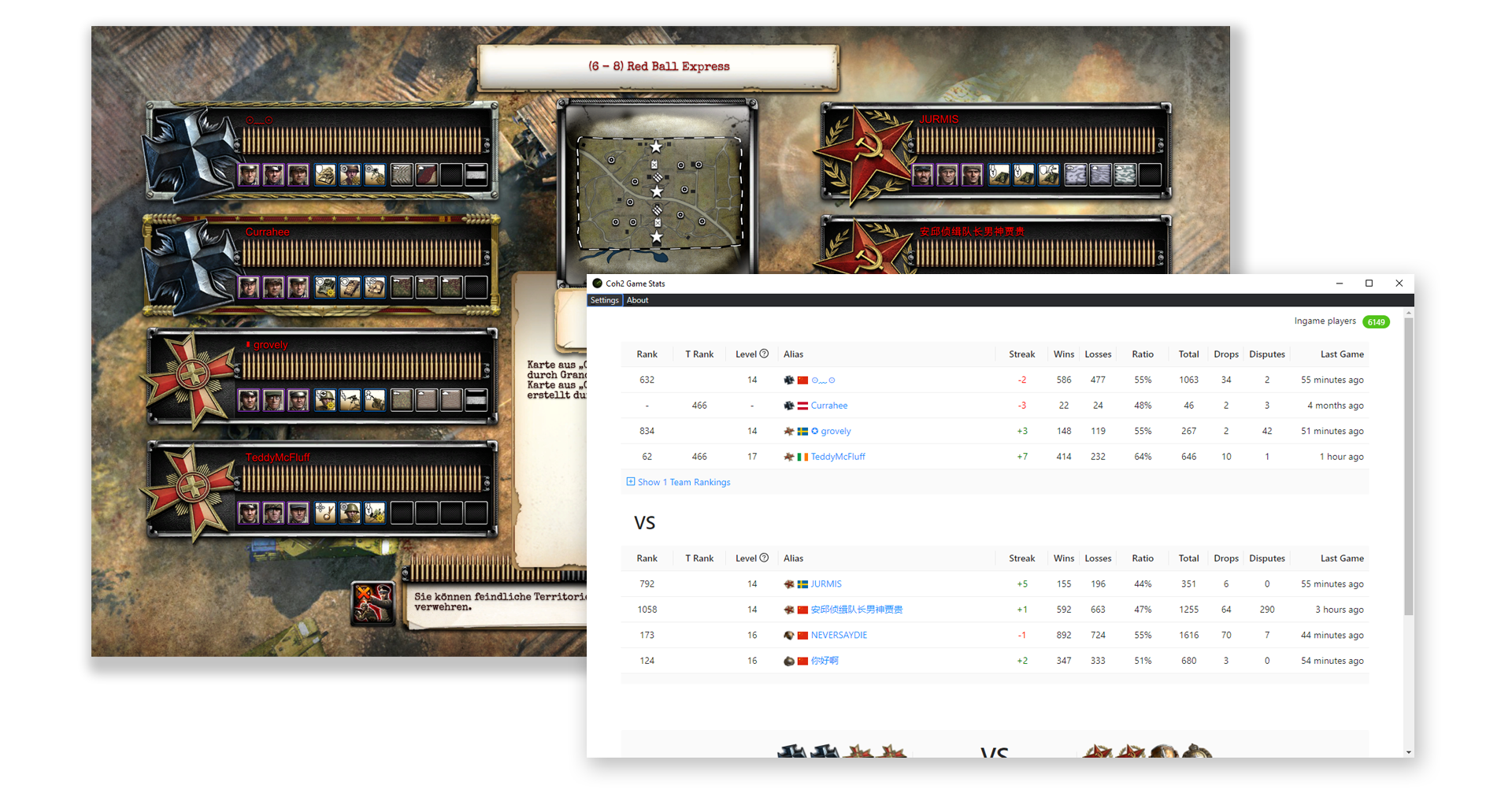 You can report any bugs / any feature requests on GitHub issues or here on forum or on our discord server.

There is lot of features which can be added to the app and we plan to improve it - mostly the streamer support. But feel free to write down the features which you would like to see most - so we can prioritize the development.

Except for the standard features other apps like this have. Thanks to the data from coh2stats.com we were able to cook up a match result prediction.


The formula for final prediction is noted in the app, if you have any suggestion how to improve this / change. Feel free to write it down. 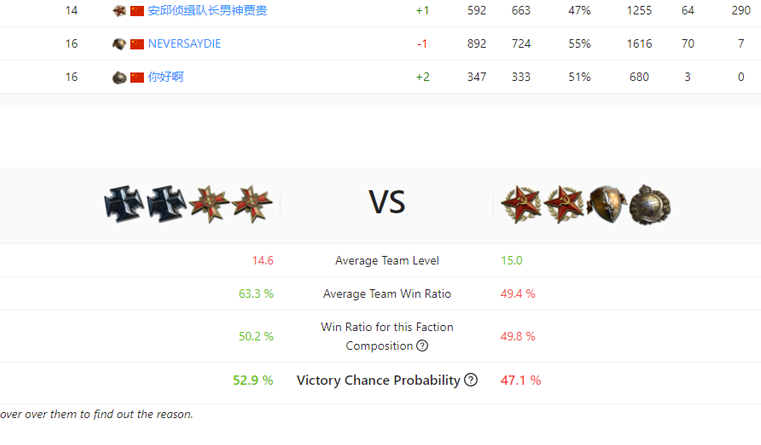 You can find and download any version of the app here https://github.com/petrvecera/coh2ladders/releases

The app is open source https://github.com/cohstats/coh2stats

This app has been created by:
John Wickedsick and me (pagep)

I agree! It must not be ready for prime time since I have not seen it announced yet.

@PageP
The next step for OBS streamers is for a function I was going to call ALIASES.

If you see a player, you can click them and setup optionally (based on stored Relic Player ID):
1) An ALIAS name so players show up even when changing their steam name. Anti-Smurf.
EX: Aerafield's steam name is NotRosbone, he still prints as Aerafield in OBS.

2) Plays a user supplied sound when match is found that includes an ALIAS person.
EX: Aerafield appears in my match I can play a WAV file that says "And there goes my ELO".
EX: Duffman gets any brit players and a WAV file plays "Look at this donkey".

3) Play a user supplied GIF or movie so viewers get entertainment value.
EX: Get a match with Aerafield and a GIF plays center OBS screen of gachiBASS.


You would need a setup dialog that should include a VOLUME setting for sound files, etc.

You may also want some way to sort them in a hierachic manner. So you only play one sound/gif. Or put them in a list and play them all sequentially??? Options.

EDIT:
This is great. I was just going to add this to MakoCELO, now I dont have to

This is great work, thank you for doing this!

I have already seen people having a blast with the Victory Chance Probability. A great feature that will make gambling on Twitch even funner.

I cant wait to see what other fun stuff you have in store.

Hopefully Coh2 is around long enough for this tool to get the use it deserves. Relic has stated that they are thinking/working on streamer stuff for Coh3. Relic and people in talks with them are being coy about what that may be. But if they at least give us the tools they have for Coh2, this can be switched over. Hopefully they give us even more information about matches right in the LOG file, instead of taking it out like they did with the 64-bit patch.

Things Relic should add to the LOG:
- Player color
- Map position
- Commanders in load out
- Commanders picked
- Bulletins
- Rank, Wins, and Losses for this faction

Not sure what you should call your app. When I made MakoCELO there was only the original CELO. Since I anticipated maybe 3 people running MakoCELO, I did not come up with a cooler name Like CELO-Xtra-Crispy

Other intangibles to think about for your app are:
- CPU usage, since streamers are sometimes CPU limited.
- Transitions when the screen updates so it has more pop for viewers.
- Notes (see below)
- For team games calc odds player will drop or crash on load

NOTES:
For MakoCELO I added some lines where you could have information scrolling or showing up. Basically a place to put more info in a smaller place. Since you guys are gathering a lot of fun data for viewers, you may want to add an option like a scrolling/rolling text that shows this data.

This is awesome. I got an exception error when running it but it installed fine so we'll see how it works.

Will try it when I get home. Does not look bad.

Hi, I used it for a moment but got a bug now.

I opened two browsers from this and it came out with an error 'Java ......'

Now it is just a white screen after a few seconds of 'Waiting for the game'.

Heroic act you have done, thank you so much!

Hi, I used it for a moment but got a bug now.

I opened two browsers from this and it came out with an error 'Java ......'

Now it is just a white screen after a few seconds of 'Waiting for the game'.


Hi thanks for the report

In the current version, if you open more than 1 window of any type - it's gonna crash. I recommending switching opening new windows to windows browser.

This has been already fixed in the dev build.

The dev build also has a dark theme. If anyone is interested you can grab it here (it should be stable):
EDIT: Outdated link. Download from the main page.

Hi thanks for the report

In the current version, if you open more than 1 window of any type - it's gonna crash. I recommending switching opening new windows to windows browser.

This has been already fixed in the dev build.

The dev build also has a dark theme. If anyone is interested you can grab it here (it should be stable):

Thanks for your help.

Thanks for the dark theme!

You will need the updated desktop app with version 1.3.4, which you can download here.
You can enable the extension on your Twitch channel here.


Follow the steps in the settings of the desktop app, to generate the ID which you put in the config of the extension on twitch.

Next, your viewers can enable the view, where they will see the current players in your match / be able to open their player cards / and see the victory prediction.


Your ideas and improvements are welcomed. The source code of the extension is open source, you can find it here.


We have also created a Discord channel where you can join for real-time discussion. You can find the discord here. 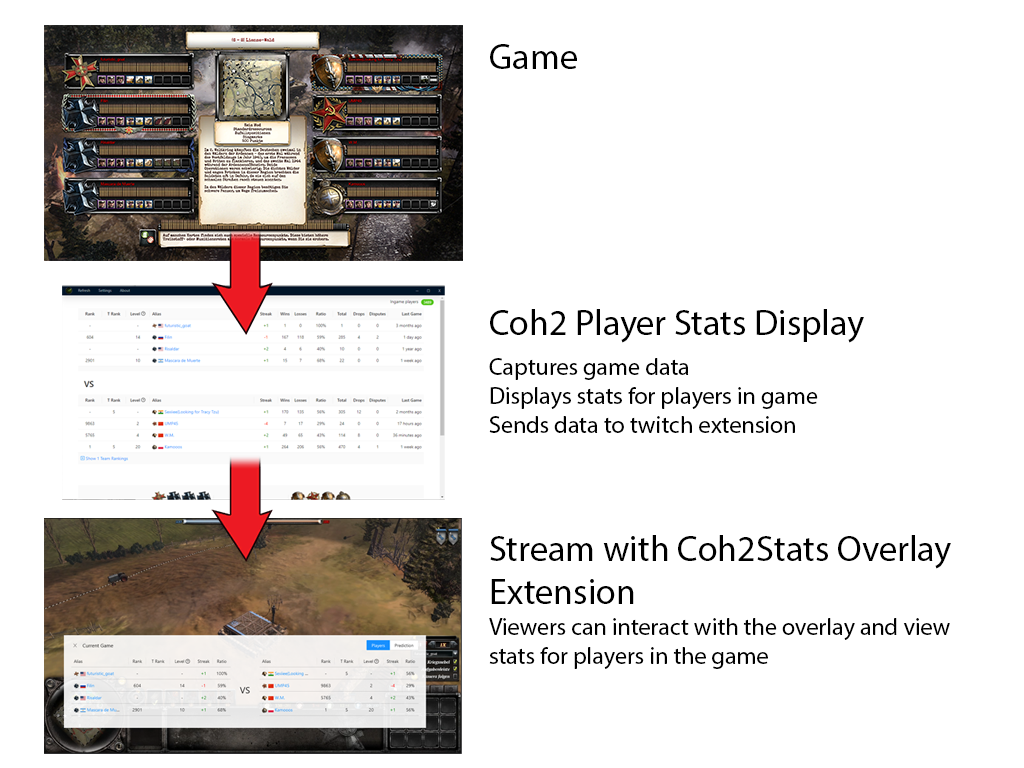 The version 1.3.4 also brings other things:
- Redesigned application bar
- Ability to force refresh of the data ( shuoldn't be needed but in some cases can be handy)
- Redesigned settings
- Additional tweaks and background improvements

On some systems - the installer/uninstaller was leaving a stuck process which would eat 100% of CPU.

I am preparing a new version of the twitch extension.

The upgrade / release process takes weeks/months as it needs to be approved by Twitch staff.
So this is going to be a new update for many months. It adds ability to modify the button which is shown on the stream. Does anyone have anything else they would like to update / change?

Thanks for the feedback!

One thing that is crucial for the Desktop App (not Twitch) is some sort of ALARM that tells players they have a game! Not sure if you already have it, but if not, please add.

I constantly have to tell people to get makoCELO so they get the alarm. Your app is maybe easier for most users to get and install.

The new version (v0.0.3) of the Twitch overlay extension has been released. If you are streamer you can install it and configure it here https://dashboard.twitch.tv/extensions/6x9q2nzzv9wewklo7gt7hz2vypdgg7

The two biggest improvements are: 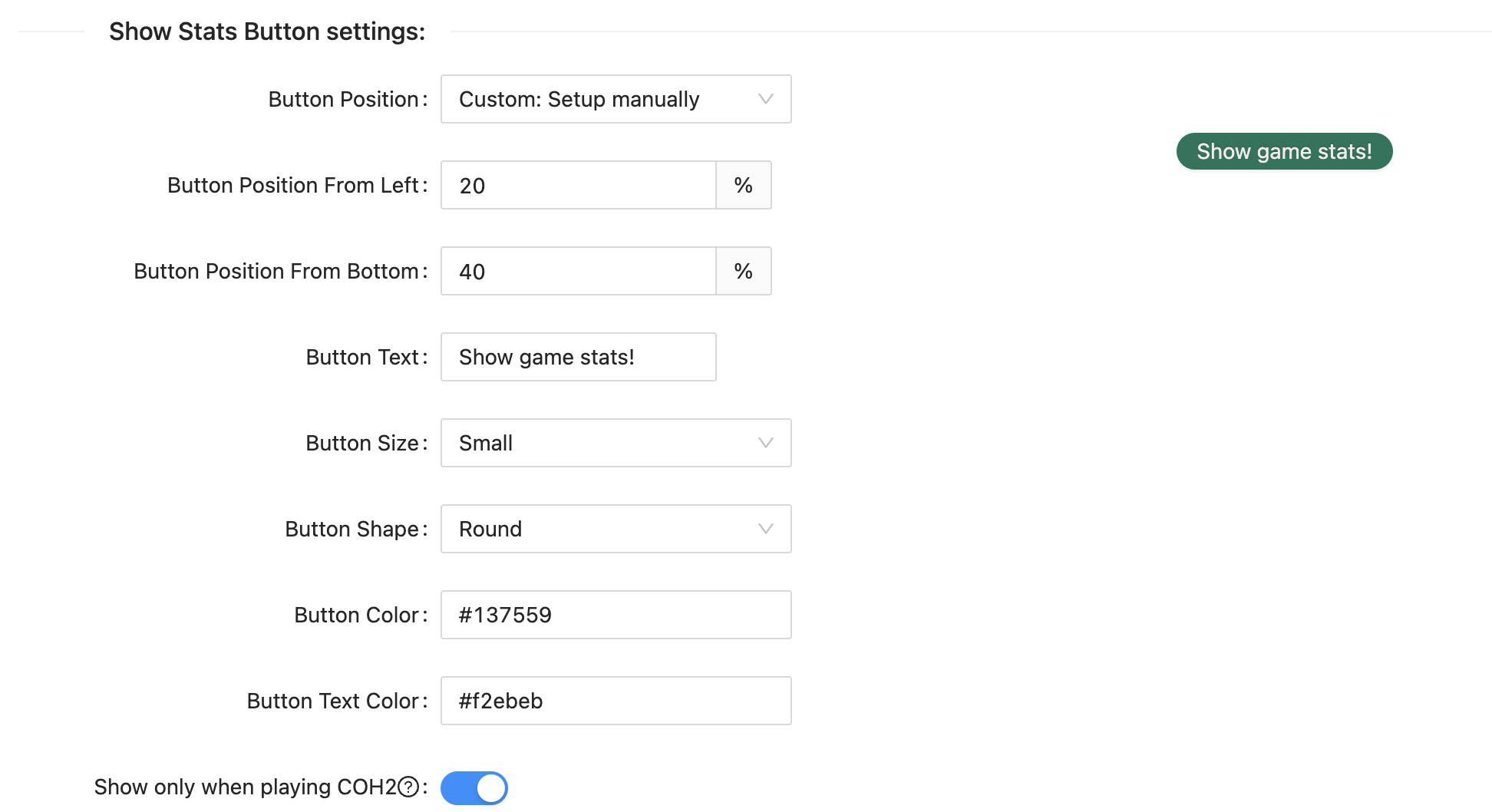 After some time, update!
- Sound notifications when match is found
- Quick player info when you click on the row