I think he talks about major from USA and I guess vet 3. That you can lock down a sector,so enemy can't cap it anymore until the major is away. So when the area of a vp or strategy point is so large and there are los blockers, you can abuse this ability.
Yeah it was not planned to have more time. Tho this means the patch will be delayed

Ok, I updated the maps now. The 2v2 version in the workshop should be the updated one. Changes are that the corner VP now only span their respective fields, the corners themselves belong to the munition points now.

Furthermore, I deleted all instances of branch_pile_03. Rosbone's observation might actually explain something that I was wondering about: In one stream I saw a unit getting negative cover by walking across an open field. At the time I fired up the WB but wasn't able to find any texture or splat that would produce negative terrain cover. When searching for this object today I found that there was one of those piles next to where I observed the issue a while ago...

Well, anyways, those are the only changes to the 2v2 version.

I applied the same changes to the 3v3 and also moved around the trees/bushes/bunkers to recreate kind-a-sort-a the same situation for both sides. Btw, the trucks Rosbone was comparing... well, they are not the same truck mirrored. The one for the southern base is roughly at the same position, towards the center from the base.

The burning tank is towards the corner vp, so that functionally the same point as the one close to the dungheap in the north. The situation there is not totally symmetrical, never was. But then again, this is so far out of the way of where the action normally is, I don't think it matters (and I never saw anybody complain about this).

Now, here is the problem with the 3v3 version: I uploaded it as new object (the name should have (mono, v2) appended). Problem is, the new steam version is acting up on this machine so I can't get to the object in the workshop (it "loads" forever) and thus can't provide a link here. Can anybody else see my workshop objects and post the link? Otherwise, I'll try tomorrow...

Btw, I also tested if the AIs are capable of building all tier buildings in the areas and turns out they are.

Downloaded and ran it in COH2. Looks good!

I will give a better check later.

Sounds good so far, without seeing it ingame

Downloaded and ran it in COH2. Looks good!

I will give a better check later.

THE STRUGGLE
This map does a good job of balancing buildings without physically mirroring them. The building layout seems to possibly favor the south as far as distance to important buildings. But the north building group seems stronger and would favor the north a little. So there is a lot of subtle balancing going on. Mostly done with sight blockers to the key points around the buildings. Which is my next point: there are enough sight blockers around that the buildings are not strong enough to want to camp in them. They are too easy to flank and do not cover enough terrain to be worth camping in. In 2v2s, the strong cutoffs force most of the game play around the center of the map. It will be very interesting to see how flanks work when more players are on the map.

1. As a player, when I see long hedgerows like these I am not sure if there is barbwire fencing inside of the hedges. So it is not obvious that I can walk thru these lines. Could leave little gaps here and there as visual cues to players that they can cross these hedges. The barb wire exists in other places on the map and is usually easily visible (good job). 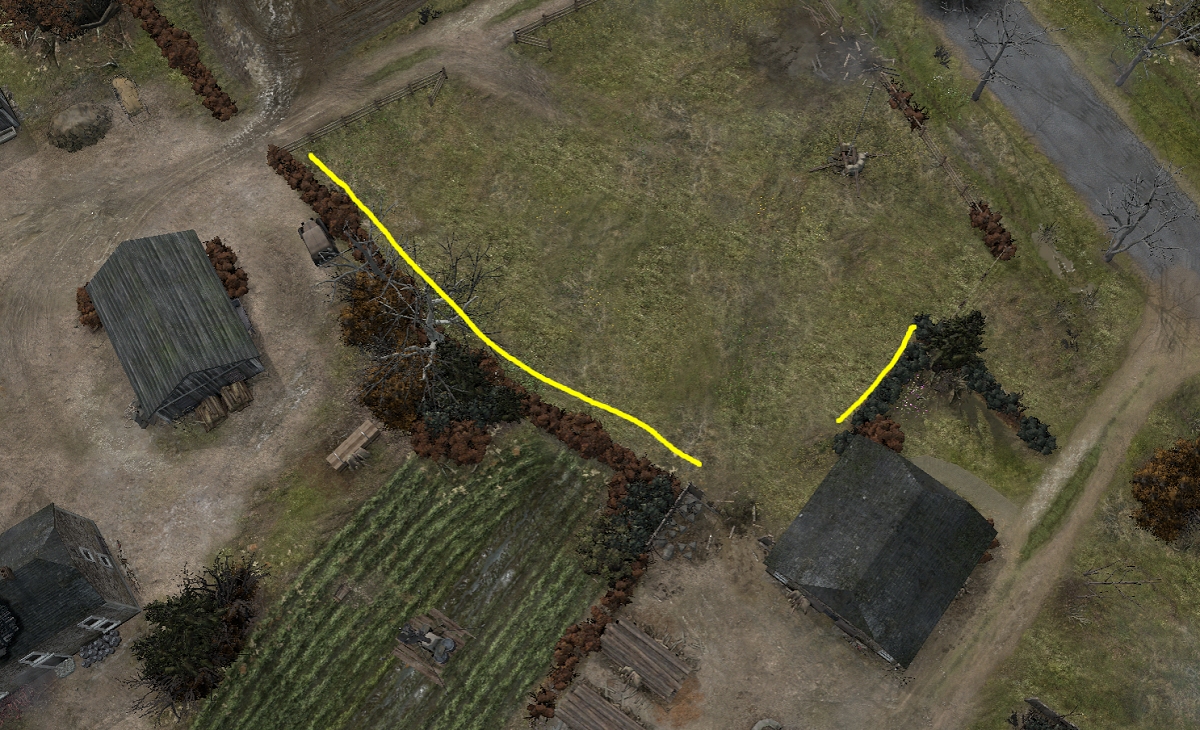 2. The mirrored buildings on the edges of the maps are not balanced. I would remove this hedge sight blocker. In 2v2 these buildings probably do not see much play. But in 3v3 they may become important MG strongholds to guard artillery pieces. 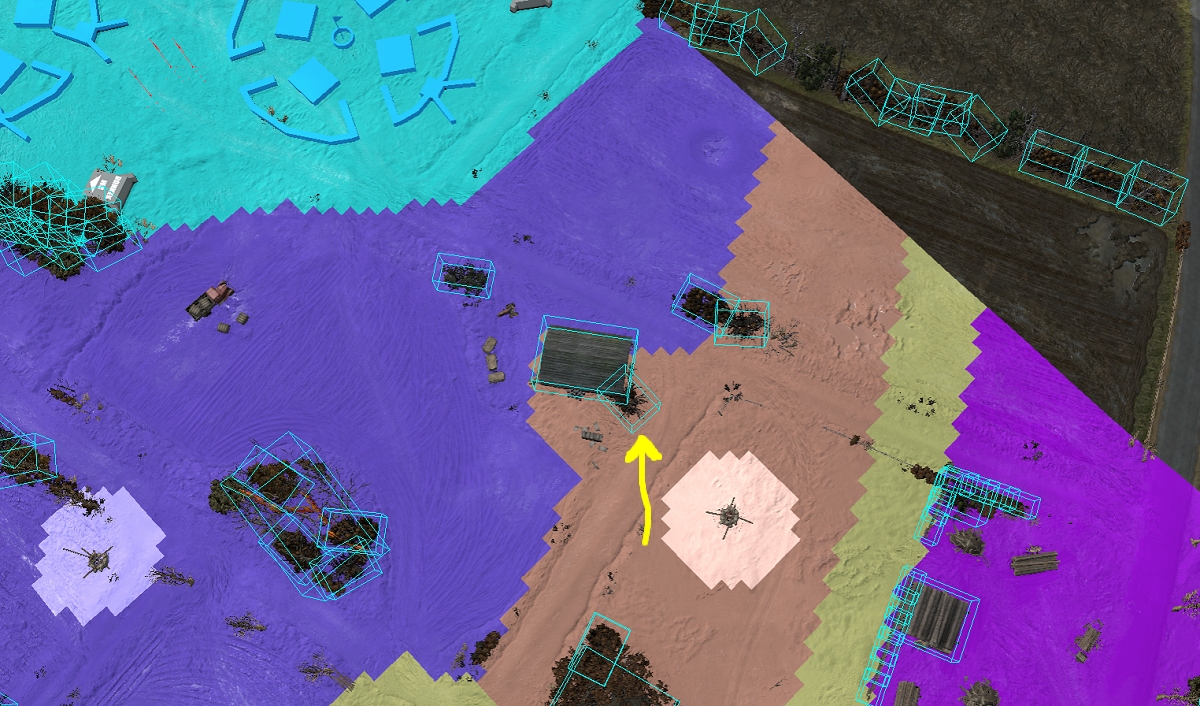 3. I think the minimap shows a building here (YELLOW BOX). 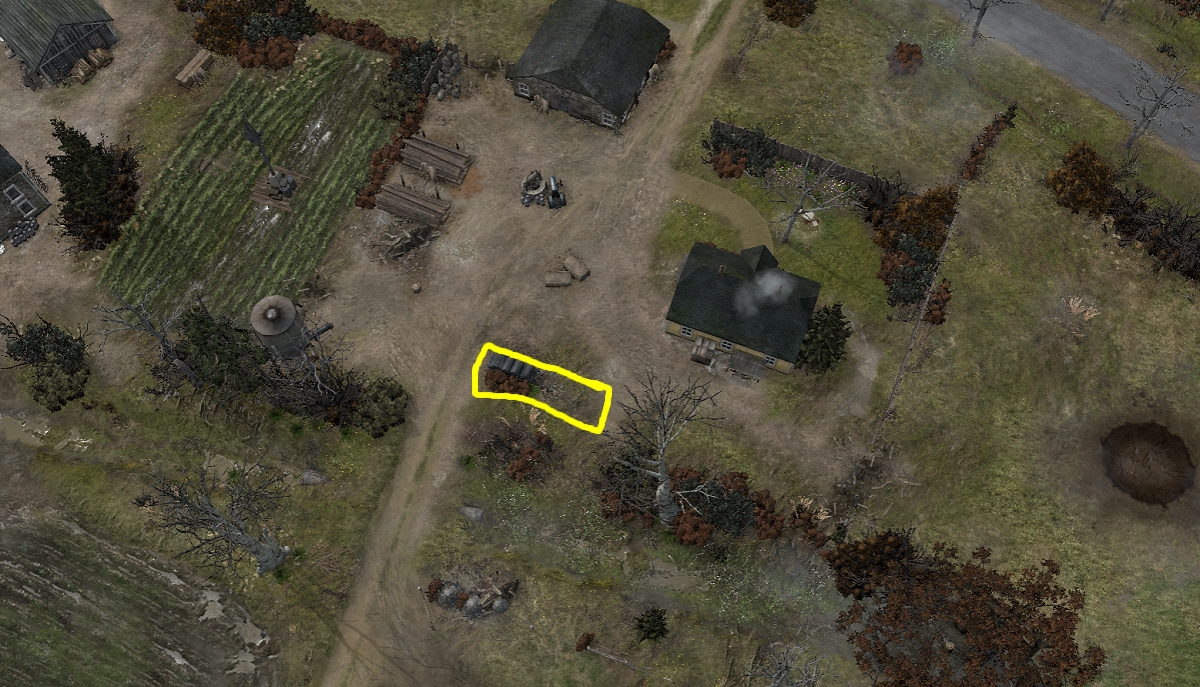 As I keep saying, I cant wait to play this in 3v3

As I keep saying, I cant wait to play this in 3v3

Ok, updated the 3v3 version according to Rosbone's suggestion.

- The bush at the north-eastern garrison removed.
- I tried to make the hedgerow in the north visually somewhat less dense
- Updated the map (indeed, it used the old version, not the the new one without the building).


Ok, updated the 3v3 version according to Rosbone's suggestion.

- The bush at the north-eastern garrison removed.
- I tried to make the hedgerow in the north visually somewhat less dense
- Updated the map (indeed, it used the old version, not the the new one without the building).

ok, that is the last change now.

the 2vs2 as well about the fixes?

ok, that is the last change now.

the 2vs2 as well about the fixes?

The map of the 2v2 version is correct already, the other two points are more cosmetic, but ok, updated the 2v2 version now as well (removed bush, made the hedgerow less massive).
PAGES (3)