by Siphon X. 26th April 2016, 03:51 AM
Welcome to part III of the statistics for the ESL Go4CoH2 series. After looking at the factions and how well they did on the different maps, it is time to examine the commanders.

The diagrams in this post show how often the different commanders have been chosen and what win percentages were obtained. The number of picks is probably the more relevant piece of information. Looking at win percentages seems appealing but they have to be taken with a grain of salt for various reasons:


It should be noted that players knew both the opposing faction as well as the map when choosing their commander load-out. It is safe to assume that they had the luxury of being able to pick their favorite commander for that specific case, unlike in automatch where the load-out has to cover a wider range of situations.

None vs. Common vs. Rare Commanders

The diagrams below show the percentage of games that ended with either no, a common or an uncommon/rare commander, including win percentages.

It seems to happen about twice as often that USF and UKF end games without picking a commander. The reason might be that more popular USF/UKF commanders (see below) have less crucial capabilities or call-ins before 3 CP, compared to those of the other factions.

All factions enjoy comparably high win ratios when picking no commander, with the notable exception of OH. It might be that other factions are better at pressuring the opponent early on without picking a doctrine, resulting in the OH player to surrender. Also, OH early game might involve a higher risk.

The diagram below shows pick and win percentages per commander during the ESL series:

The most popular doctrines were Mobile Defense, Osttruppen, Mechanized Assault and German Mechanized, in that order. These four together have been used in 83% of the games, even though Ostheer has a large roster of commanders.

Interestingly, the top five commanders have nearly identical win ratios. There are several commanders with higher win ratios, but the sample size quickly become too small to get reliable percentages:

The diagram below shows the percentages of chosen commanders ('pick percentages') over the course of the series with time discretized roughly in two-week intervals spanning four or six cups (EU and NA edition). The dotted, vertical bars indicate when patches/hotfixes were applied.

Pick percentages overall are very stable compared with those for other factions. The most obvious trend is the decreasing popularity of the Osttruppen Doctrine in recent cups. There is also in increase in the "Other" category due to players trying out other doctrines.

The diagrams below show commander picks and win percentages when facing the three different Allied factions. Mechanized Assault Doctrine was used more often against USF, while win ratios indicate that it yields around 50% win percentages independent of the opponent.

Osttruppen Doctrine was the favorite commander against UKF. It was also used more often vs. Soviets than vs. USF, although win percentages indicate that it yields subpar performance against the Red Army.

The diagram below shows the commander choices for each map. While there are notable differences between maps, there is no obvious correlation between doctrine choice and the type of map. Maybe, with the exception of the Jaeger Armor being picked on the two more open maps Langreskaya and Crossing. 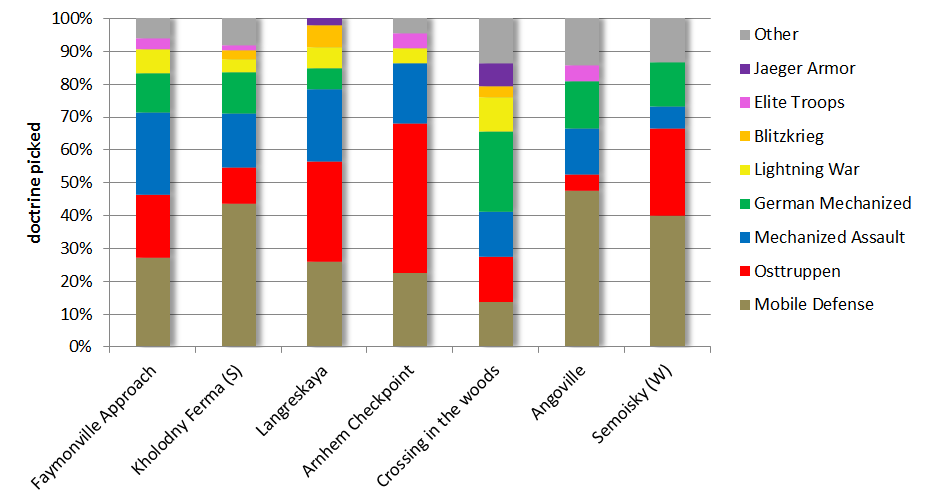 Before the changes in 2015, Shock Rifle Frontline (SRF) and Guard Motor Coordinator (GMC) were commonly considered the most popular commanders for 1v1. While both are still in the top four in terms of picks, other commanders have caught up or even surpassed the two now.

Partisan tactics enjoy the highest win rate out of all commanders for all factions used in at least 5 games. On the other hand GMC is doing poorly with a win percentage of 28%, which is the worst win percentage of any "top four" commander.


The diagram on commander choices over time below shows that GMC was mostly used in the first few cups and made its comeback since the last round of hotfixes. Soviet Industry was not used much initially but became relatively popular after cups #6. Lend Lease tactics popularity declined over the course of the series.

Commander picks for Soviets do not seem to depend on the opponent. Partisan and Armored Assault Tactics have been used slightly more often against OH, while SRF was used more often vs. OKW. Win percentages indicate that the two IS-2 doctrines, Armored Assault and Shock Rifle Frontline seem to fare better vs. OKW, while Partisan might work a little better vs. OH. GMC is doing particularly poorly against OH with winning only 3 out of 15 matches.

Commander choices do differ from map to map. For example, Armored Assault Tactics has been picked sparsely on Langreskaya and Arnhem Checkpoint, and not at all on Crossing.

Partisan Tactics have not been played on Crossing and only once on Langreskaya, probably because these maps are fairly open.

GMC, on the other hand, was picked more often here. Soviets overall have a very low win percentage on these maps, so this might explain the poor win-ratio for GMC in general. For example, considering only games played on Faymonville Approach, GMC enjoys a win ratio similar to SRF of about 45%. 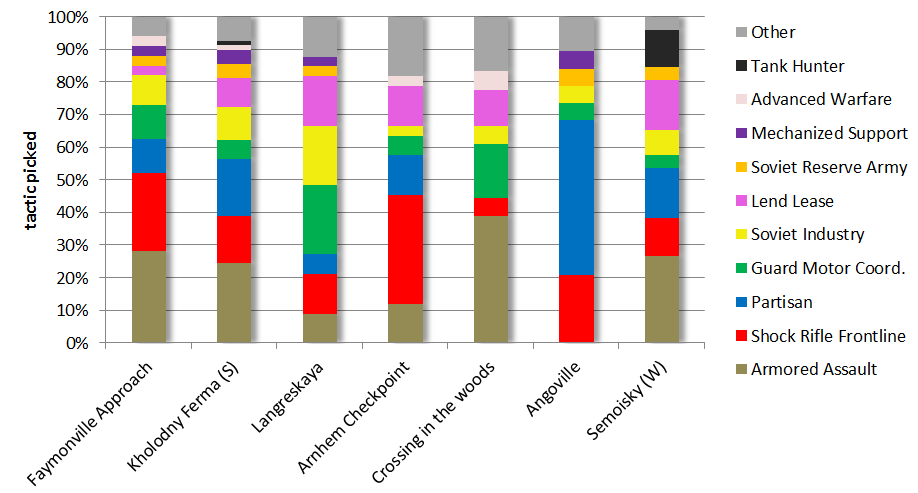 The diagrams below show the pick and win percentages for the most popular OKW doctrines over the course of the series:


The most popular doctrine - Scavenge - has the highest pick percentage of all commanders across all factions. Even the second most picked, Luftwaffe Ground Forces (LGF) ties the next highest pick percentage - OH's Mobile Defense - at 32%. So, almost 70% of games with OKW were played using one of two commanders. Adding Special Operations doctrine, the three doctrines make up for 82% of games.

The two new doctrines, Firestorm and Overwatch, and the formerly popular Fortifications doctrine where only picked in seven games, scoring one win in total.

Scavenge pick percentage was fairly stable at about 35%, with a spike in the period in which infantry veterancy was not working. The popularity of Spec. Ops. seemed to have increased over time at the expense of LGF.

The commander choices for different matchups (below) show that Spec. Ops. have been use almost exclusively against Soviets, while Breakthrough has mostly be used vs. UKF. LGF was used against all factions, but was the favorite by a margin vs. USF.

Scavenge was used in against all Allied factions in about 30-40% of the games. It did poorly against Soviets in terms of win percentages and very good versus UKF, winning nine out of 12 games.

Commander picks were reasonably similar across maps (below). Spec. Ops. was chosen more often on Semoisky, Arnhem Checkpoint and Kholodny Ferma, probably due to the good anti-garrison tools provided by this commander in the form of infiltration grenades and IR assault rifles.

It is noteworthy that Spec. Ops. was not picked once on Angoville, a map that also has a significant amount of important buildings in the eastern part. On the other hand, Breakthrough was picked rather often here, while otherwise being chosen predominantly on the more open maps Langreskaya and Crossing. One might speculate that this means OKW players tended to focus more on the open, western half of Angoville. 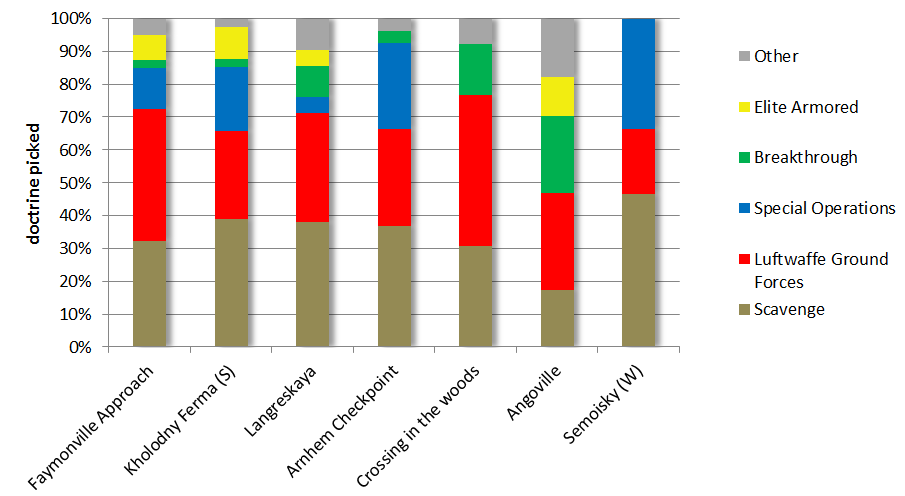 The diagram below shows pick and win percentages for the most popular USF commanders during the series:

Win percentages are relatively similar around 60% for all but AC, which only achieves about 40%. "Other" covers two games with the Mechanized and one with Airborne Company, neither of which was won.

The meta around USF commanders seems to have changed significantly over the course of the Go4CoH2 series: In the first two periods TSC dominated but dropped off quickly after that. This correlates to the win rates: In cups #1/#2 TSC won 9 out of 13 games. In the time range up to the end of #8, however, only 5 out of 13 matches were won. In this period HCC became popular.

RC was not chosen much before cups #7 but in about 25% of games after that. Since the last patch AC is the most picked commander, with TSC also becoming more popular again.

The diagrams for commander choices vs. matchup show some differences in games vs. the two Axis factions. HCC was picked more often in games against OH, whereas AC is the commander of choice against OKW. Here, it reaches win percentages of more than 50%. The bar for OH is not shown because there were only four matches, all of which were lost by USF.

For TSC and HCC, OH also seems to fare better than OKW. OH, however lost most matches against Infantry Company (4 out of 5) and when the game was over before the USF player picked a commander (5 out of 7).

The diagram below shows that RC was mostly used on Arnhem Checkpoint, Angoville and, to a lesser extent, on Kholodny Ferma, probably due to the higher number of relevant buildings on these maps. The bar for Semoisky was omitted, because USF participated in only two games on this map.

HCC was by far the most picked commander on Kholodny Ferma, while not being picked once in the 13 games played on Arnhem Checkpoint. 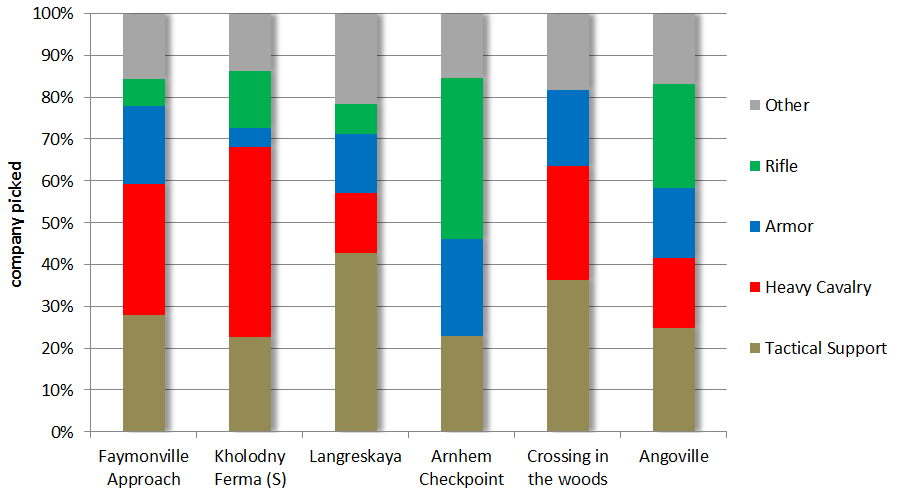 The diagram below shows pick and win percentages for the most popular UKF commanders during the series:

The only common commander being used more frequently was the Royal Engineer Regiment (RER). Win ratios differ quite significantly with Vanguard and MAR winning about 60% of the games while the other regiments were victorious in only 40% of the matches.

The category "Other" covers three games each with the Royal Artillery and Advanced Emplacement and one with the Commando Regiment. Neither of these were won by UKF.

There is only one UKF game on record in the first period #1/#2, which happened to be played with the SWR, thus the rather meaningless 100% there.

The three original rare commanders Vanguard, TSR and SWR were used in about 80% of the matches up to the second patch. TSR was by far the most popular around the January monthlies, but it was used less and less afterwards.

The February patch introduced two new UKF commanders but also applied nerfs to offmap abilities from SWR and TSR. It changed the distribution significantly. MAR was used increasingly more often at the expense of the three other rare commanders, which in the last period were only picked in a mere 14% of games combined. RER, however, was apparently not affected and has been fairly stable at 10-20% from cups #4 onwards.

The diagram below shows pick and win rates vs. the two Axis factions. Most win percentages against OKW are missing as the sample sizes were smaller than 5. There are no major differences in terms of picks between the factions. MAR and TSR seem to perform more ore less similar for the two factions. However, percentages suggest that Vanguard might perform better vs. OH.

The diagram with commanders vs. maps shows reasonably similar results for the most played maps. Arnhem Checkpoint and Semoisky have been omitted because there UKF played only three and two games, respectively. In the 13 games played on Crossing, SWR was never picked, and Vanguard only once. 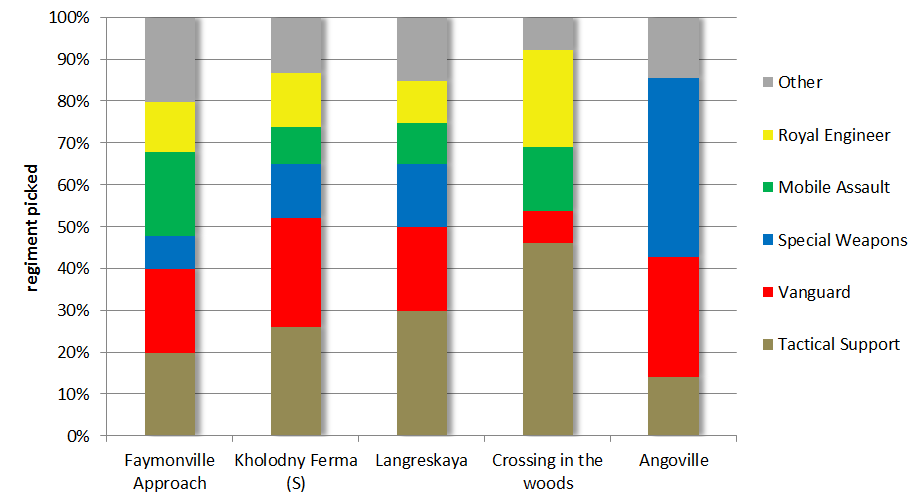