by Siphon X. 14th April 2016, 14:44 PM
The ESL Go4COH2 series brought months of entertainment and tense moments as players clashed week after week to vie for victory. With hundreds of matches between the best COH2 players, the tournaments also provided a wealth of data to analyze.

The statistics presented here are based on the games played in the Best of Three mode, which served as the format of the quarter-finals and up. The data set includes all replays available from the ESL site and other sources, as well as data acquired from live casts on Twitch.

There has been an EU and an NA edition of each of the 13 weekly cups, as well as the three monthly cups from January to March - a total of 32 cups. While about 20% of the games were lost as replays were not uploaded, data from 464 games were gathered. More details can be found here.

To start with basic faction selection and games won:

Soviets were picked more often than USF and UKF together, while on the Axis side, Ostheer (OH) was the favorite faction. Winning percentages are reasonably close, potentially with a slight advantage for Soviets and USF. While USF and UKF have the highest and lowest win ratio, respectively, they also have the lowest sample size, so sampling errors are expected to be higher here.

If we split up the time into about two week intervals, with each interval covering two to three cups, we can get an impression on how the factions's picks and win percentages evolved over time. During the period of the ESL cups, three batches of patches/hotfixes were applied:


More information on the patches can be found here.

The diagram below shows faction picks over the course of the cups. The black, dashed lines indicate when the patches were applied. 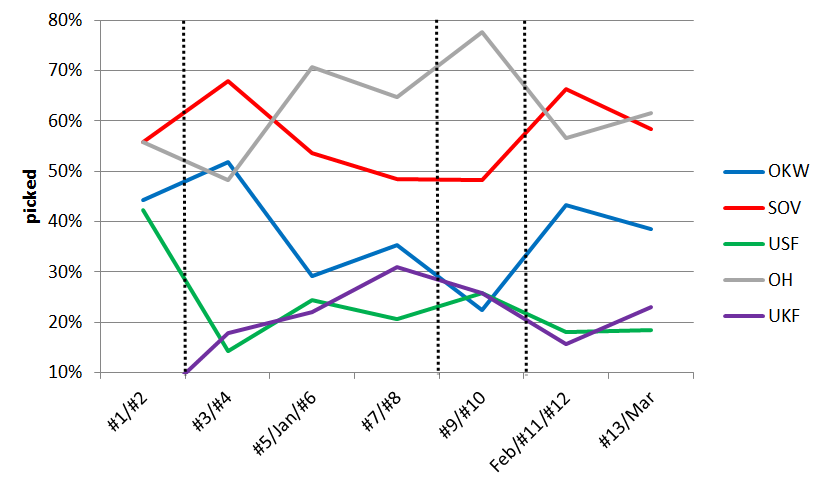 In the first period, UKF was mostly ignored (there is just one UKF match on record). The other four factions started out relatively close to each other. However, with #3/#4 and onwards UKF was more frequently chosen, while USF and OKW was picked only in about 20 to 30% of the games.

Since the last patch of the period, SOV and more noticeably OKW have been picked more often. In fact, the curve for Soviets shows some correlation to the OKW curve. This might indicate that either Soviets are chosen to counter OKW or vice versa.

The next diagram shows win ratios for the factions during the course of the series: 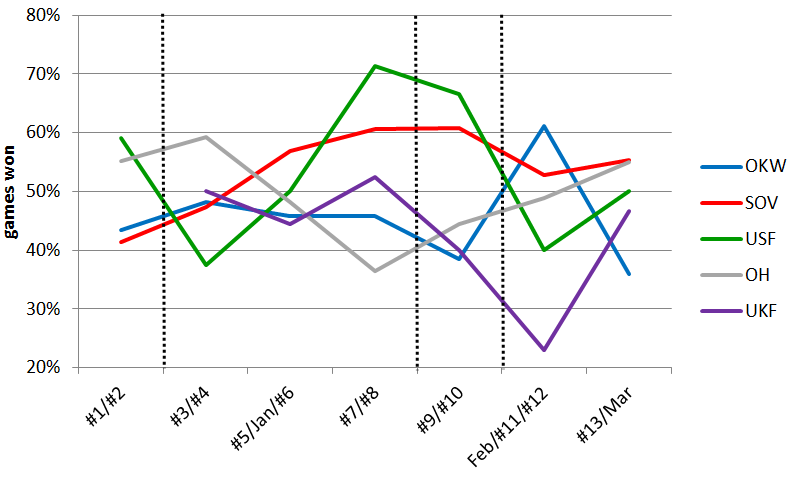 Win ratios for OH and USF started out comparably high. OH win ratio however, declined to a low at around the middle of February when cups #7 and 8 took place, while the SOV win ratio increased steadily. In the same period, USF win ratios, after hitting a brief low, soared and surpassed the Soviet win ratio. In that period even UKF win ratios were higher than those for the two axis factions. It has again to be noted though that sample sizes for USF and UKF are comparably small and thus have to be taken with a grain of salt.

Since the second round of patches, win percentages for OH are on the rise. Soviet and USF win ratios seem not to be affected greatly by this second patch round, which brought the most changes to units. They did decline significantly after the third round, which "merely" fixed infantry veterancy.

The strong fluctuations of the win percentages for OKW and UKF in the most recent tournaments are likely produced by a combination of players adapting to the changes and low sample sizes.

The following table shows how often a certain matchup occurred and how often the respective Allied faction won:

Over a third of the games were played between the two Eastern Front armies. Overall, Soviets and USF seem to have a slight advantage against both axis factions, while UKF appears to be weaker. There are only minor difference between the two Axis factions.

When grouping matches into games played before and after the last round of patches, the numbers hint that the dynamics changed to some extent: 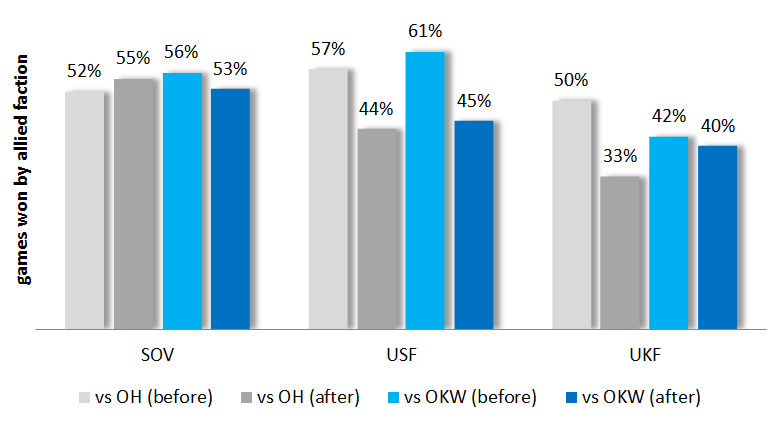 Soviet win ratios are fairly stable. The numbers indicate that OKW was initially slightly weaker against SOV which changed after the patch, but the differences might not be significant given the sample sizes.

Win ratios for USF, however, did go down significantly. UKF seems to have suffered as well, but the small number of samples (only 19 and 10 matches against OKW before and after the patch, respectively) as well as the strong variations over the last few weeks for this faction makes it hard to draw final conclusions.