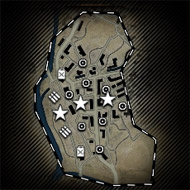 Mind blanked couldn't remember Axis team make up so I made Penal then sniper. I usually use snipers as anti mg in a building. Didn't work out that way so I tried to find safe places to attack without worrying about Kubel. From the start both teams went blob mode so was extra careful with sniper so I didn't much with it and it ended up dying on retreat to Sturmpios. Also lost my car chasing down a Kubel, got the kill but 221 followed up and killed me.
Not looking good so I play extra safe and blob up my penals and get shocks in case I need extra durability. As a team we are getting our asses kicked with some bright spots here and there. Axis bet both Flak and Luchs which do a great job of locking us down and we don't really have an answer. I finally break and turned all 3 Penals into PTRS blob. Felt dirty but I was able to kill Flaktrak in one volley. I also chase off luchs but unable to get the last shot off and kill it.
We are still on the back foot but a couple of things go our way which turns the game in our direction. First off, looking at the replay they all look to be heavy stalling if not KT then for Sturm or something else.
As I look to decap the south I notice Schwerzer aint firing at my squad so I rush it with PTRS blob destroy it and run the hell out of there. Ally gets out a KV8 which should have been killed since it ran over a mine but he was able to get a katy barrage that killed off their raks and later satcheled them to destroy it. Brit got AVRE which slowly got wipes and I was able to once again push south and this time destroy Battlegroupe, however lost 2 Penals during retreat. At this point I got 2 T3485s and finally get the luchs and at this point we are in control.
One KT finally showed it face but AT walls and PTRS Penals slow it down so it doesnt do to much. Panther also shows up and becomes a tug of war in the center. Shit hits the fan for the Axis when KT tries to push but engine crit causes its push to stall. After massive damage it runs away but I chase it down, get the kill and run away with tanks intact. AVRE gets 2 Obers in one shot and Panther is forced away.
From here on out we just keep the pressure up, ally and I combine to destroy another Schwerer and Sturmtiger arrives to late to make a difference.