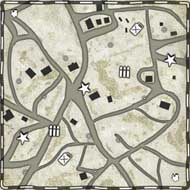 He went for early cut off I stopped him and then quickly decapped his cutoff and gas with engi/car. He got snare off but if felt it was good trade since his committed to getting my car while I capped map. Most engagements went my was due to catching him out of cover. Once I got CP2 called in commissar for healing and noticed I was trading pretty good so I made 5th penal and went for M5 for quick transport and mobile reinforce. Got his cutoff twice/gas twice and managed to get scorched earth x2 on his gas. Rushed a Katy which didnt really pay off to much but did force a lot of retreating from him. He made P4 and I made T3476 we poked and prodded each other with nothing really happening. He eventually made a Brumbar which I felt was out of position so I rushed him with x3 T3476, after several bounces and misses I chased him to Brum to his ATx2 and P4. We kept missing each other and I called in AT overwatch. He lost both tanks and I lost 2 T3476, thought it was good trade due to being ahead in MP and Gas. He quit shortly after.

Thoughts:
Scorched earth is a great ability, hard to use offensively but great if able to pull off. Since I went T1 I had no mg, used scorch earth on my cutoff for a nice surprise.

Commissar attack buff is great for chase down wipes.

I feel as if flametank has no place, Katy does the job safely and cost less. Even though I was ahead I didn't feel like it would have provided any benefit to me.
PAGES (1)