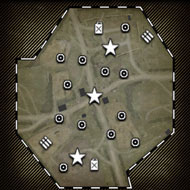 Started game with my normal commissar build which is Penal/Clown Car/ x3 penal. The opening is really slow but once the last Penal is built I can usually bully the other player until they get multiple PG.
I used the clown car to decap and harass once I saw his opening Gren was attacking my gas, forced multiple retreats as my Penal bullied his Gren. I avoided his MG as much as possible and harassed it with clown car. He made a 250/1 and attacked with a flame engineer in it, which I promptly chased down with PTRS clown car.
Game starts to swing in my favor when I Satchel his mg in a building and get the wipe. At this point I skipped base healing and used MP for Commissar to force retreats and buff penals for more favorable battles. I then use m5 quad for mobile suppression to make battles as favorable for me as I can. Game is going good until I hit mine that takes out quad and commissar.
We both get our tanks out at the same time but he has AT gun to support while I have PTRS, I try to catch him off guard by rushing him with clown car to try and jump out and satchel but it doesn't work.
I am ahead in gas so I get /my 2nd 76 out and have them spaced out so he is hesistant to push which I end up taking advantage of with a PTRS penal satcheling from behind and clean up with 76.
Little later do the same thing to his 2nd P4 but use AT overwatch for the kill. At this point he switches to PG spam with shreks to deal with my tanks and I use katy to counter but not really successful. I Decide to make flame tank since I have tank advantage, flame tank does its job as it bounces some shreks and causes retreats. I then push him again with tank into base and katy at same time, was unable to wipe but at this point he is MP starved. He brings rest of army to try and kill off KV8 but I protect with 76s. On his last retreat I finally wiped 3-4 squads. GG

Possible Bug:
Radio intercept does not notify when 250/1 is built.
PAGES (1)