by pingtoft, DanielD 15th October 2013, 21:32 PM
Pingtoft's Company of Heroes 2 Replay Analyzer just might be the greatest step forward in war technology since the Engima Machine. Offering player info, build orders, an order map and CPM (commands per minute) statistics, this program will help you figure out exactly how you won - or lost - that tough match. The creator of the program was kind enough to explain exactly how it works:

A replay file saves information about maps and players and all commands issued by players during a game. These commands include move, construction of buildings, production of units and upgrades, commander selection, calling in units or abilities like off map artillery or throwing grenades. Not included are actions, such as opening the tactical map or scrolling or clicking on random points on the map. In other words, commands are input parameters to the game engine. This means that statistics like kills/losses and VP score are not stored in the replay.

General info about the players and the game. The COH2.ORG icon opens a browser window to display the Ladders Player Card on COH2.ORG, while the Steam icon opens the player’s profile on Steam.

* Note on player names and commands:

Because of random starting positions (I believe) there is no explicit connection between Players and commands. I use a best effort method based on matching selected commanders to available commanders. If there is ambiguity, e.g. 2 players share a commander and both select that commander, the players will show as their faction and internal ID, e.g. 'Soviet 1' and 'Soviet 3', on the build order, map, and CPM panes.

Shows the build order and commander choices of each player. Notice that the timestamp is when the command to produce units etc. is issued, as opposed to the in game post game construction tab, which show when units are completed. 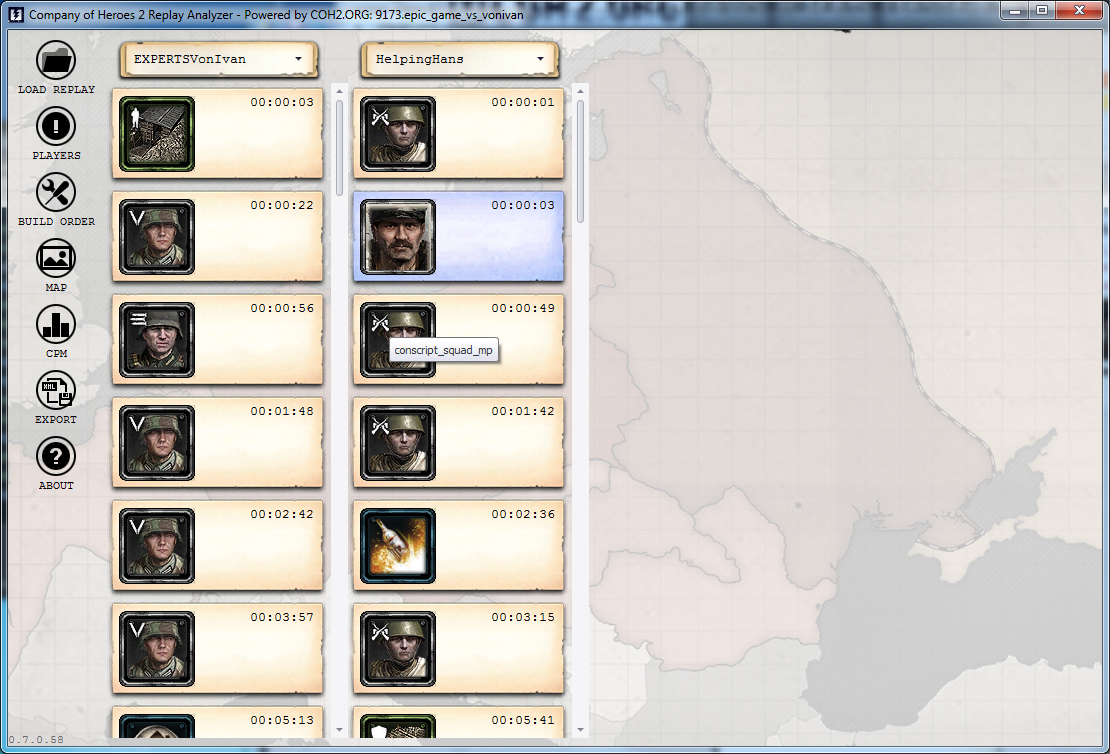 Shows every command that has a coordinate associated with it, e.g. move and attack-move commands. The two sliders on the track bar at the bottom can be used to select a timeframe to display. 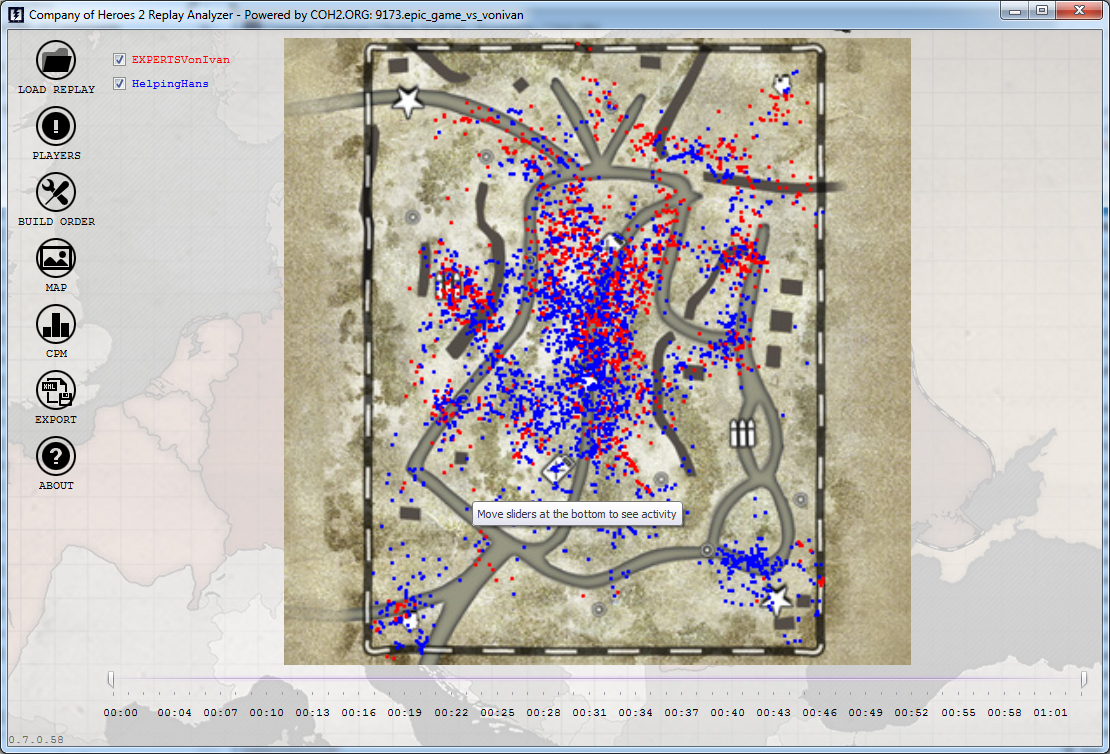 Graph showing commands issued per minute of each player. The numbers in parenthesis next to the player names are the average CPMs. As you hover along the graph, you can see CPM counts at specific moments in the game. 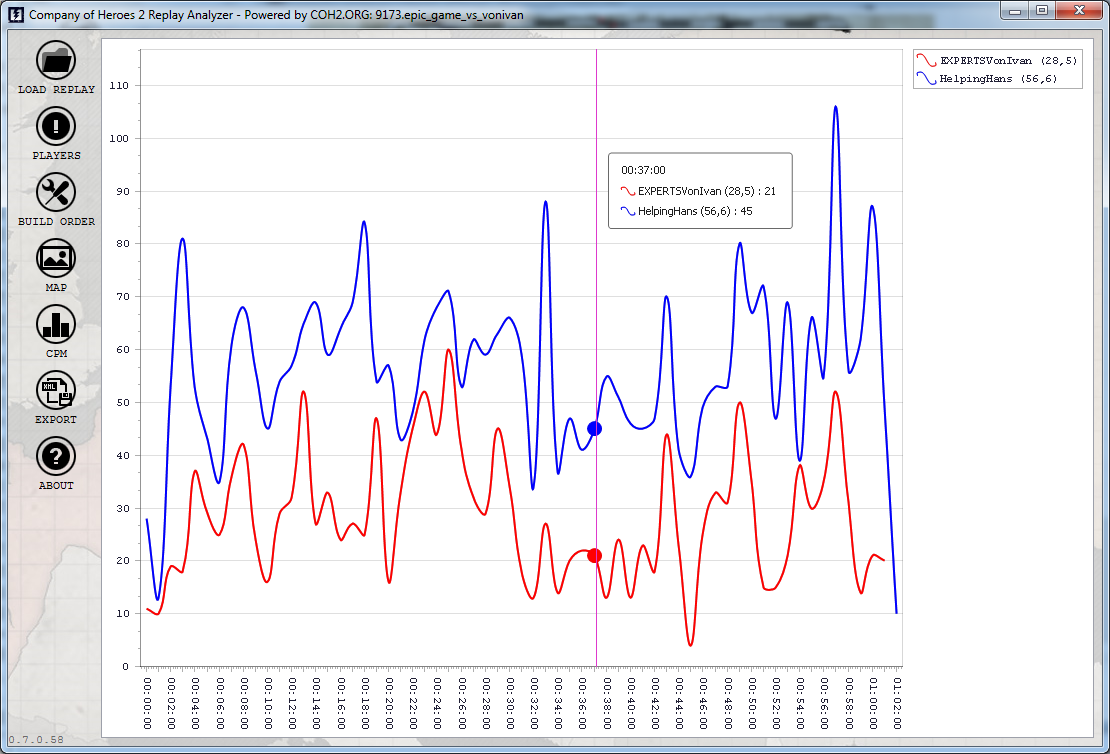 If that isn’t enough data for you, you can export all commands as either XML or CSV.

Administrative rights are not required and, apart from dumping a log file in ...\My Games\Company of Heroes 2\CoH2RA.log, it does not read or write to any other locations.

Finally, a big thank you to Inverse for updating the parser to CoH2, the good people at Relic, and OnkelSam for his awesome artist's skills

If you have any questions or comments, feel free to leave them in the thread below. Please also let us know about any bugs that you find or suggestions you may have for improvements.