Let Me Tell You a Story

When I first played Company of Heroes during its beta phase in summer 2006, I was immediately captivated by the gameplay, graphics and sound design. The game had a visceral and rewarding feel, and it still remains one of my favourite games. I wanted more people to play the game and I spent a lot of my free time devising tournaments and events for people to enjoy. I also applied my trade to Dawn of War 2 and Company of Heroes 2. 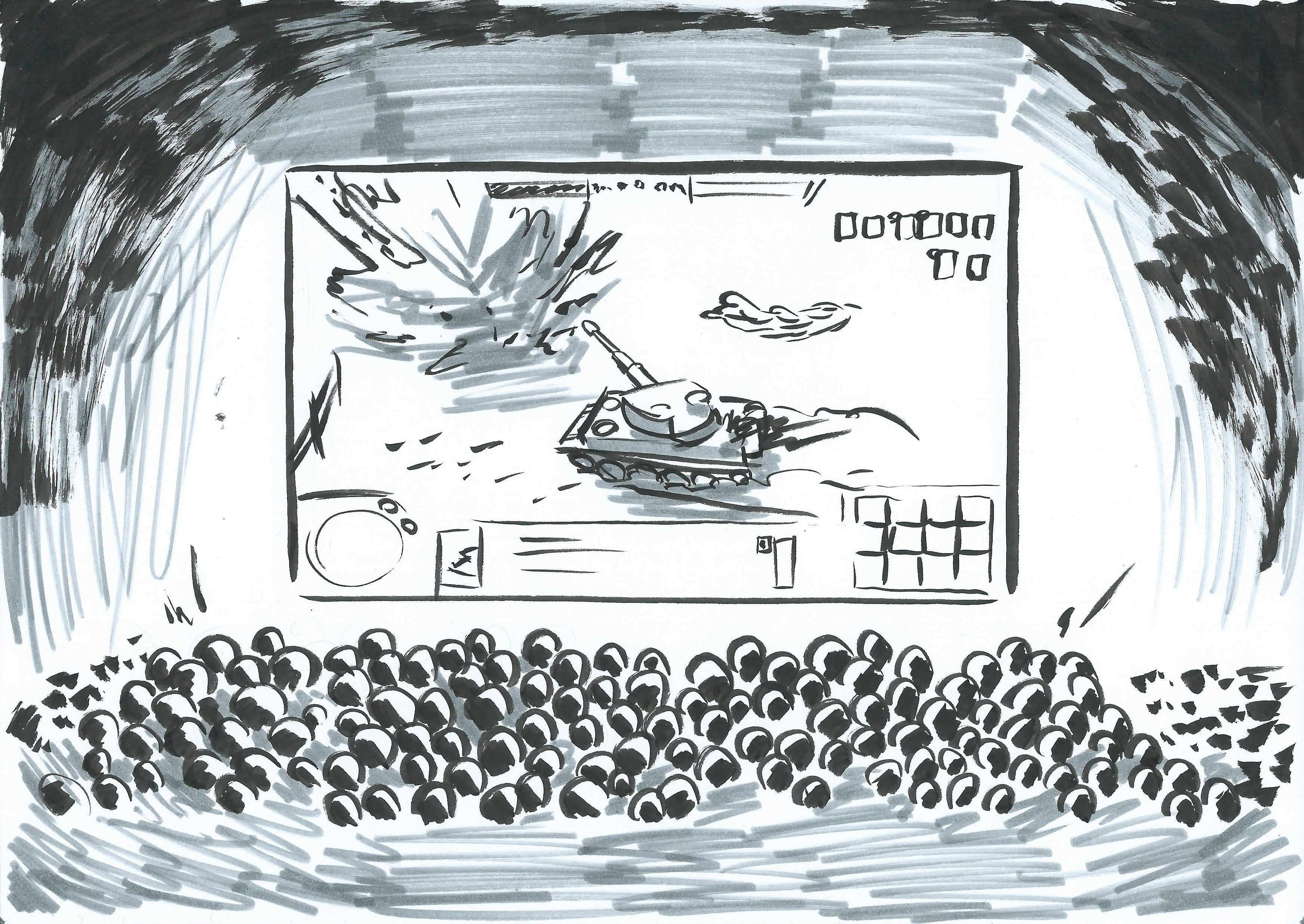 All of Relic’s games have a strong competitive potential, but just needed some realisation from the developers. My fellow tournament organisers and I were going flat out for nearly ten years, with not much gain to show by improving player turnout in tournaments. However, while player turnout did not improve that much over the years, the numbers of those viewers in streams have increased exponentially - which shows that people are interested in watching the game, and this even includes people who probably don't even play the game, but who enjoy watching the game being played at the highest level.

I loved spending all that time to support the competitive scene, doing my part to provide hundreds of hours of enjoyment for thousands of people and I do not regret any of it. However through interactions with Relic as a developer over many years I myself have found that they neither trust my opinions, nor value my hard work or contributions in building communities for their games. The same can be said of many of the friends I have made in the scene over the years, many of whom no longer contribute to their respective scenes.

Over the Christmas holidays I was very surprised to see the highly anticipated ESL Go4 series be announced, understatedly, with not much pomp or fanfare. The low-key announcement was perplexing, since this was a crucial waypoint on the roadmap, which was unveiled many months ago and many months before than announced in August 2014 at Gamescom with an $18,000 prize pool. Yet, here it was, being announced during the run-up to Christmas but with a much reduced prize pool.

Just by looking at the initial set of rules, it was obvious that not one community tournament organiser was consulted about them. The people at ESL are great people but I know for a fact that nobody on the staff there has any expertise in Company of Heroes 2. Therefore, the conclusion has to be the rules were devised by Relic. The low key announcement, the considerably reduced prize pool and the unorthodox rule set indicated that Relic may not want to commit to a second season and that this venture is simply a box ticking exercise for their road map.

The “prize” given to the commentary outfit who wins the contest is just farcical. These tremendous and talented individuals put in a lot of effort in their free time, to create wonderfully produced pieces of content and what's their reward? To simply be allowed to use ESL logos on their videos! At the very least, give the winning commentary team a visit to the ESL studios, to see a live production set and perhaps, cast the finals live from a studio, so as to give the casters and the fans something amazing to remember.


The Growing Pains of Another Gaming Scene

By comparison, please consider this important article by Tom Cannon, one of the founders of Evolution Championship Series. Tom highlights that big esports leagues have let down gaming communities because the leagues themselves had no expertise with the games and no proper communication with the existing community.

This is so similar to Relic, who have ventured into unknown territory without a map, a compass or a guide, while experienced community members have been left on the side lines to twiddle their thumbs while their skills and talents go to waste. You could say that they could join ESL and help out from that side, but it takes a lot of time to train up on the ESL cup system, and this can be very daunting. The other point is that experienced tournament organisers enjoy their independence and can do things how they want, make things work and stamp their own signature on their event.

Then you have to look at the amazing success of the Capcom Pro Tour. A competitive gaming event working in co-operation with the existing grass roots scene, in order to deliver a year long event across the globe. Just take a look at their schedule for 2015.

Not only that but Capcom hired two long standing community members a few years ago, Peter Rosas and Neidel Crisan. Peter was made a producer for Street Fighter V and Neidel is director for esports at Capcom. A fantastic way to show community co-operation, since you have trusted members of the community on the inside, doing important work for the game. The television advertisement for Street Fighter V also uses a lot of tournament footage, Capcom have realised how important this niche of their game is, and they are willing to support it as best they can.


Even Yoshinori Ono (the director for the Street Fighter franchise) mentions how important competitive is for their brand in a recent interview with Gamasutra.

I don't want to be overly negative towards ESL and to their credit the ESL staff responsible for Company of Heroes 2 have been taking on board a lot of suggestions from community members, as they have been making adjustments to the original crude set of rules. When I was a volunteer for ESL they were an extremely helpful, passionate and inviting organisation. All the people who work at ESL, be they volunteers or paid staff are very passionate about the games they work on.

The current arrangement helps provide a buffer for Relic so that if the venture is not a great success Relic can deflect the blame by just saying ESL came up with the rules and organised the events and say that they only provided the small prize pot. In this way Relic can quickly dissociate themselves from the venture.

In Relic's eyes ESL is a useful scapegoat in this venture because they are fully aware the organisation lacks deep ties with the competitive player base. If the current event model had been promoted with a known COH2 community organiser instead of ESL and the event then went bad the competitive player base at large would no doubt side with the community organiser and then blame Relic for the debacle. As it is, ESL will take the fall if things go pear shaped.

Now consider another project on which ESL has been working and that is the Mortal Kombat X Pro League. While the game is very well supported by Warner Bros. at the grassroots tournaments such as Evolution Championship Series with some eye watering prize pots for a fighting game, Warner Bros. also worked with ESL to deliver the largely online Pro League, with live in-studio finals which are very well produced. ESL also hired commentators from the Mortal Kombat scene and kicked off the league with a live event called the Fatal 8 from the ESL Studios in Burbank, California.


All this only further reinforces the view, that this new Go4 competition was invented by Relic just to appease the COH2 competitive player base, in the hopes of keeping us in our box and to stop us demanding the full-on $18,000 commitment initially proposed by Relic. If this very low sighted and very bland venture which signally lacks ambition does not pan out properly Relic can say that they tried and it just does not work.


It's not all Doom and Gloom

Ultimately, the community contributors want the Company of Heroes franchise to be a success, to have a massive player base, to have wonderful online and offline events, to have a great selection of commentators, to have a captivating selection of mods and maps and with all of that, and above all, to enjoy a respectful and symbiotic relationship with the developers. The community and the players get great matches and entertainment. Relic sells more of their stock, it is that simple.

However this relationship lacks that sense of purpose on the Relic's side. It feels like the community are trying with all their might to build a co-operative, long-lasting and beneficial relationship, while Relic remain dubious, neutral and highly cautious about the efforts people are trying to put in. Try as we might, Relic seem unwilling or unable to commit to a serious relationship with the community, for whatever reason that may be.

As a community we must in the meantime resolve to continue to work closer together with each other and push our own events forward. We've gotten this far with meager support and we should keep pressing on, in order to deliver great content for viewers and great events for the players.


The views expressed in this blog do not necessarily represent the views of the owners of COH2.ORG