Games 1 and 2: Bois du Chatelet
Games 3 and 4: Semois
Game 5 (if necessary): Langres
* maps selected by contenders in veto process 1 week prior to fight 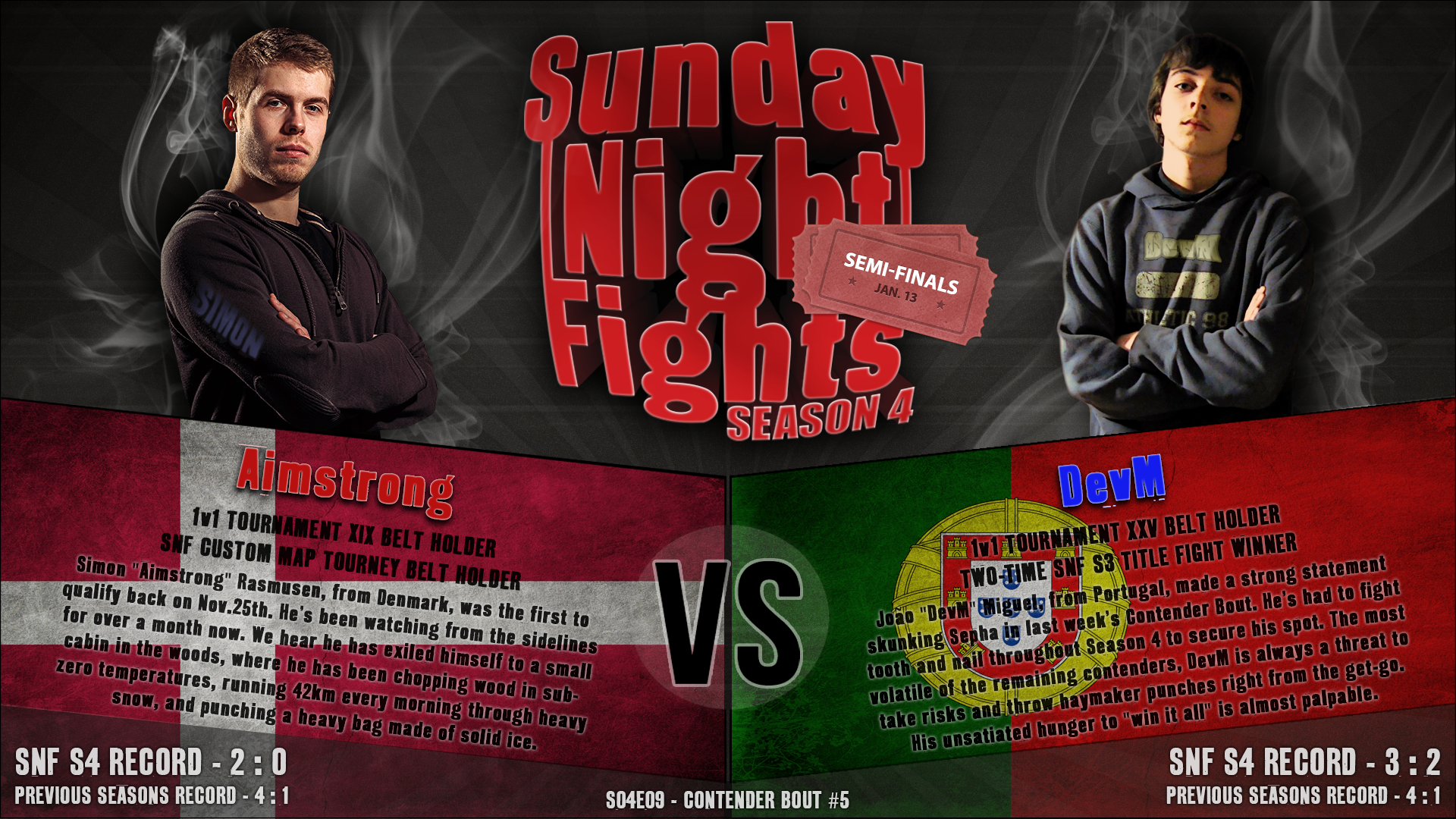 Following the fourth and final Contender Bout last Sunday we finally found out which player would take on the number one seed for Season 4 of Sunday Night Fights, Aimstrong

DK. His opponent will be the embattled veteran of this season, the youngest of our contenders, the early-game wiz-kid, DevM

PT. These two will face off in a best-of-five this Sunday night to determine which of them will advance to the final and the chance to become the Heavyweight Champion of Company of Heroes.

Aimstrong qualified in the very First Quali Tourney back in mid-Novemeber and has only lost a single game so far this season. The Danish powerhouse beat both of the players who will be duking it out in the Second Semi-Final on his way to qualifying and actually managed to take down Symbiosis 3-0 in Contender Bout #1 without breaking a sweat. No one can question Aimstrong's position as the top seed for this season and he has consistently proven that on the big stage he can throw the big punches. Some people have said that Aimstrong will suffer from having qualified too early and not having enough practise but after COH2.ORG's interview it's obvious that Aimstrong thinks he is well prepared.

DevM's performances in Season 4 of Sunday Night Fights have been turbulent; having shown us the most dominating performances of the season and also having shown us how to lose games which seem to be certain victories. At times DevM amazed even the most experienced Company of Heroes players, smashing through quality opponents such as KoreanArmy and Freestyler in under 10 minutes. The aggression and intense micro skills of DevM's early-game US has been sublime and overwhelming to many of those he faced. At other times, however, he has stumbled, faltered and fallen. Several times during this season DevM went from huge leads against Symbiosis to eventual losses as he recklessly threw away units, made illogical tech choices and seemingly just threw games away. He also lost in his very first game of the Third Quali Tourney in dramatic style putting huge pressure on him to qualify in the Fourth Quali Tourney. The Portuguese youngster finally qualified quite convincingly though, reaching Contender Bout #4 comfortably and then dispatching Sepha 3-0 in that series.

This match up is one that both players say they are supremely confident about; DevM has described Aimstrong as predictable in his interview and thinks he can pick him apart in the early-game, whilst Aimstrong believes his practise and consistent play will make him unbeatable. Aimstrong is the epitome of a solid player, the number one seed, a veteran of Sunday Night Fights, the man who has only lost a single game so far this season. DevM is the volatile youngster, unpredictable, aggressive, often brilliant and sometimes insane but always a player to be reckoned with. Which of them will advance to the Final? Will DevM steam-roll his way through with quick victories? Will he be able to keep his cool if he doesn't win early? Will Aimstrong shrug off his opponent as easily as he always seems to? You'll have to tune in this Sunday to find out! 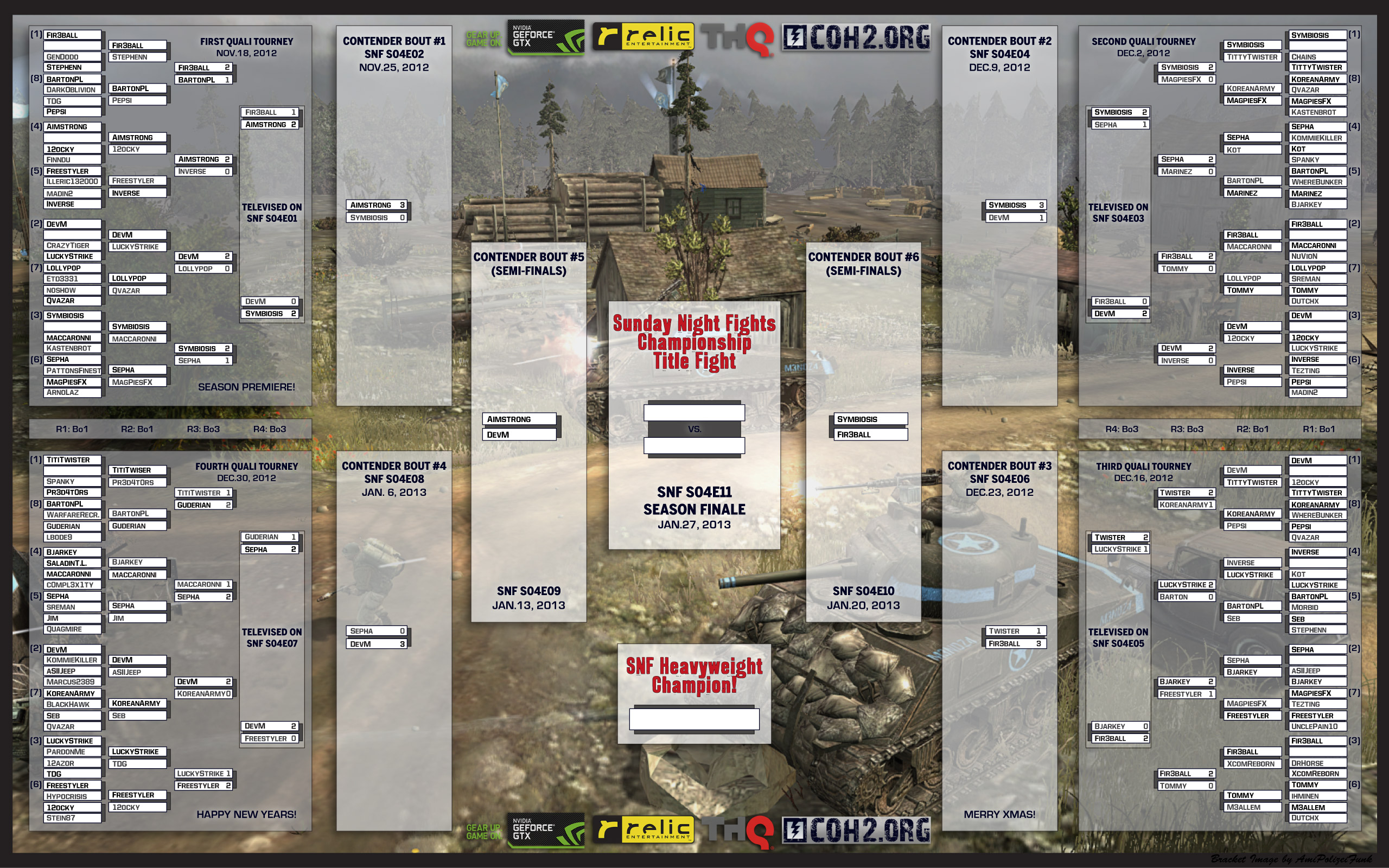 AmiPolizeiFunk, Yoink, ntd, and the rest of the SNF Crew will be joined on the show by two very special guests. Eagleheart21, Relic Entertainment's Lead QA for Company of Heroes 2, will answer some questions in an exclusive interview before the matches get underway. Originally from Montreal, Eagleheart21 will be joining us from Vancouver, B.C. Guderian, top player and tournament winner, will join the casters to provide expert analysis during the games. Originally born in Russia, Guderian has lived in London for many years, and will be casting SNF from China! 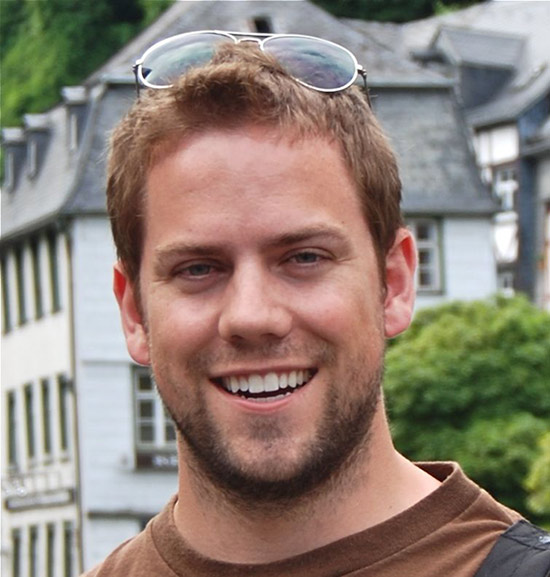 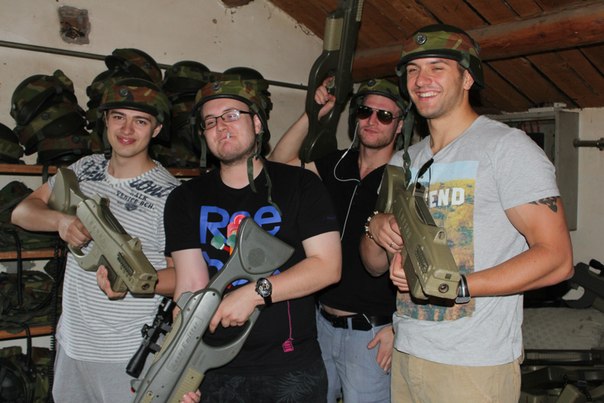 Join AmiPolizeiFunk, Yoink, Guderian, Eagleheart21 and the rest of the SNF crew, and
let's get ready to rrrrrrrrrrrrrumble!