by Gbpirate 20th July 2020, 12:55 PM
That’s a wrap, folks! The first CoH Master League tournament, Man lebt nur Zweimal, came to an exciting end last month. It was a resounding success with dozens of games played and hours upon hours of casts over four days. MLNZ featured tried-and-true automatch and curated competitive maps from the community in a special tournament mode mod that eliminates a few non-competitive aspects of coh2, like main gun criticals, vehicle abandons, and improved pathing.

The tournament was filled with surprises and upsets every day of the tournament. Big names were shut out early, many ace games were played, bugs happened , and the grand final went all the way to the wire!

If you weren’t able to catch the livestreams or you just want to go back and re-watch your favourite player, don’t worry! Below, you can find links to casts from the official Master League stream and Master League Partners like Tightrope, Greyshot, and others, including the official Korean-language caster, 101st Airborne.

In the weeks since MLNZ ended, there have been spirited discussions about the state of the game based on outcomes of the tournament here on .org and Reddit. During the first weekend there were a lot of upsets. The matches were extremely competitive with a large majority of matches split 2-1 rather than quick 2-0s. High seeded players like VonIvan(3) and HelpingHans(7) were knocked out early while Elpern (26) lost his last match at the end of the second day, earning him a spot in the top eight players and $20.

In the second weekend, the stakes were much higher. GBPirate has collected some data about those matches that you can see below. Interestingly, wins between Axis and Allies were split exactly 50/50. Most notably, though, was the complete absence of OKW and USF was chosen as the Allied faction 60% of the time. The results from the Grand Final were quite fascinating. In the first match, USF won three of the four games (all USF vs. Ostheer) but in the second match, the outcome was reversed, where Ostheer won three of the four games (two against USF, one against Soviets, one loss against Ostheer). 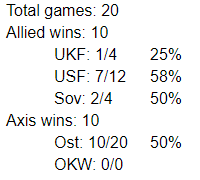 Future CoH Master League events are coming to you next month! A wild card tournament is slated for early August, led by trusted community members WhiteFlashReborn and SturmTiger Gaddafi while the next main ML event is scheduled for August 23/24 and 29/30.

About the Company of Heroes Master League

The Company of Heroes Master League is a community-driven project that showcases CoH’s competitive scene. It features tournaments every two months and is broadcast live on Twitch. The prize pool is funded by members of the community chipping in small dollar amounts every month. By becoming a Patron, anyone can have the chance to vote on a variety of things that affect future tournaments and events via the exclusive Discord channel that brings together fans, players, and the organizers. In addition to the regular tournaments, the Master League is a living history of Company of Heroes. Detailed statistics of past tournaments are documented and results from the twenty most recent events are used to seed players in upcoming tournaments. This is to ensure that the Master League stays as competitive as possible while providing an archive of past achievements. The best part about this is that the data is free to access and available to the public! Check it out in the Master League spreadsheet. For more information about the CoH Master League, read the announcement post and, if you’re interested in getting involved, visit the CoH Master League Patreon page.