by GeneralHell 28th August 2015, 18:50 PM
German Commanders
This guide will describe the commanders, sometimes referred to as "doctrines", available to the Germans. Each commander has five "doctrinal abilities" that are unlocked by command points (CP) as you progress through a multiplayer game. The guide will be updated as new commanders are added or current commanders are changed. 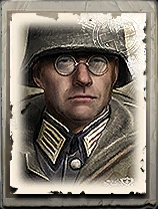 A defense-based doctrine with strong anti-tank capabilities. This doctrine gives the German armor several abilities that increase their combat effectiveness and survivability, followed by the most devastating off-map artillery in the game.
2CP – Panzer Tactician

All armored vehicles gain the ability to deploy a smoke screen blocking line of sight in an area. Incredibly useful against enemy tanks, weapon teams, or any anti-tank infantry squads, as they will not be able to shoot the vehicle without sight.
5CP – Hull Down

An upgrade that can be used by Pioneers, Grenadiers and Panzergrenadiers, allowing them to build defensive sandbags around your tanks, making them immobile yet giving them more protection from enemy fire, increased accuracy, and quicker reload times. The tanks can break cover and move at any time.
8CP – Pak43 Emplacement

Need a lot of AT firepower, but you have no fuel? The Pak43 emplacement is your solution. This massive 88mm gun, same caliber as the Tiger, can easily destroy any enemy tank from long range and through any obstacle, although it is stationary and turns slowly.

Allows a Command Panzer IV to be called onto the battlefield. With a smaller HE cannon than the standard PIV, the Command Tank is more effective against infantry but can only threaten lightly armored vehicles. The Command Tank also gives a defensive bonus to units residing in its aura (45).

The most devastating off-map artillery in the game. A Railway gun will fire three large caliber shells into the designated area, causing massive damage to any unit that is in the area. Its weakness lies in its cost and the ease with which units can evade the shots.
Festung Support Doctrine 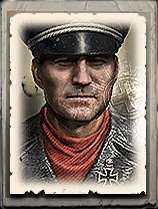 A doctrine that suits a defensive playstyle. This doctrine contains a lot of on- and off-map artillery, cost-effective Relief infantry and sight blocking smoke bombs.
2CP – SdKfz 250/7 Mortar Halftrack

Not the strongest mortar in the game, but the fact that it is on wheels gives it the ability to bombard multiple areas at once. If micro’d properly this halftrack can be tough to catch. In addition to its standard high-explosive shells, it can also fire incendiary shells to burn out the enemy, and smoke rounds to cover retreats or assaults. Drive it from one engagement to the other, providing your infantry with vital support that can give you the advantage in any fight.
4CP – Smoke Bombs

A plane drops huge smoke bombs into the designated area, blocking line of sight for a short period of time. Similar to smoke grenades and smoke screens on a larger scale.
6CP – Relief Infantry

The use of this ability causes troops lost in combat to be replaced by "Ostruppen". This is a relatively weak fighting unit compared to other German infantry. They make up for their weak strength in cost effectiveness and large numbers, with reinforce costs much lower than normal German Infantry.
8CP – LeFH 18 Artillery

Allows construction of an on-map artillery piece. This light 10.5cm Field Howitzer doesn't have the destructive power of some Soviet artillery, but it counters with a good rate of fire and reasonably long range. This is an excellent unit to wreak havoc on the enemy defensive positions from a safe distance.
12CP – Sector Artillery

While the ability is active, any enemy unit that enters the designated area will be barraged by 105mm shells. This makes it an ideal ability to defend VPs or deny the enemy access to a sector without taking heavy damage.
Jaeger Armor Doctrine

A vehicle-focused doctrine with a weak early-game and great power during the late-game. Easily laid AT mines, useful air reconnaissance, and high line of sight coupled with the Elefant Tank Destroyer make it the best late-game doctrine.
2CP – Halftrack Riegel 43 Anti-Tank mine

The standard German halftrack can now lay heavy anti-tank mines. These mines will deal a lot of damage to any enemy vehicle that drives over them. Anticipate where the enemy will approach from, and place them on chokepoints.
4CP – Reconnaissance Overflight

A plane will fly over the designated area for a small period of time, revealing all enemy units and terrain near the location. Use it to find enemy anti-tank guns, MG positions, infantry movement or scout the base to see what your opponent is teching.
5CP – Spotting Scope

All tanks can now be upgraded with spotting scopes. When stationary, the line of sight of the unit will be greatly increased.
12CP – Stuka Bombing Strike

A JU-87D Stuka dive bomber is now available for air support. When used, it will bomb the designated area with a 50kg bomb inflicting heavy damage to any enemy unit that gets hit by it. If used on a captured sector, the bomb will neutralize the sector.

Allows the Elefant Tank Destroyer to be called onto the battlefield. This behemoth has devastating range, firepower, and virtually impenetrable front armor. However, it’s lack of turret and slow speed make it vulnerable to flanking maneuvers. 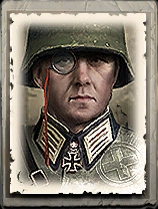 This doctrine is used best in combination with an infantry-heavy strategy. It contains several abilities and upgrades that provide greater tactical strength to your infantry, with powerful late-game artillery and air support. Its drawback is the large amount of munitions required for upgrades and call-ins.
1CP – Ambush Camouflage

HMG teams, Grenadiers and Panzergrenadiers can upgrade camouflage, giving them the ability to conceal themselves when in cover or deep snow making them invisible to enemy units. When attacking an enemy unit, the squad will break camouflage and do more damage for a very short period of time.
3CP – Jaeger Light Infantry

All German combat infantry can now be upgraded with two G43 semi-automatic rifles, replacing two of the standard K98k (Grenadiers) or MP44 (Panzer Grenadiers). Upgrading to G43s also gives the unit the ability to interrogate dying enemy units that are crawling on the ground, revealing positions of enemy forces on the map for a short period of time.
4CP – Tactical Movement

All infantry units will move as fast as possible while this ability is active. This ability is best used when you plan on moving multiple squads at once. A global "Oorah!".
8CP – Light Artillery Barrage

A light artillery barrage from nearby 7.5 cm le.IG 18 infantry support guns can scatter enemy forces. While not particularly powerful, these shells will force your opponent to react or take damage.
12CP – Stuka Close Air Support

One of the most powerful air attacks in the game. A Stuka bomber will attack the designated area for a short period of time, making several runs. The 37mm cannons will inflict heavy damage to enemy units inside the area of effect.
Assault Support Doctrine 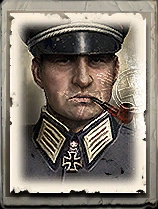 This doctrine excels at gaining resources quickly and pushing into the late-game. Featuring the Opel Blitz Truck for gaining extra resources in the early game, a powerful Strafing Run, Fragmentation Bombs, and the devastating Tiger tank, this doctrine can counter nearly any threat.
1CP – Artillery Field Officer

An Artillery Field Officer specializing in supporting troops can be called onto the battlefield. The officer can co-ordinate artillery fire, call for smoke bombs to be dropped, and increase nearby infantry's combat effectiveness.
3CP – Cargo Truck

An ability that calls in an Opel Blitz Truck for 200 Manpower. This truck can ‘lock down’ anywhere in friendly sectors, granting extra munitions and fuel. The amount of extra resources are similar to the amount gained from a single strategic point. Only one allowed per sector.

A JU87-D will perform a strafing run on the designated area for a period of time. With two MG-17 Machine guns, the strafing run will cause damage to enemy infantry and suppress or pin them. An incredibly powerful call-in best used for its almost instant ability to pin infantry.
10CP – Fragmentation Bombs

High explosive fragmentation bombs are dropped on the designated area, inflicting heavy damage to all units in the area. Has a high cost and is easy to avoid; best used on units that cannot move.

The mighty Tiger tank can now be called onto the battlefield. This heavy tank is equipped with a powerful 88mm main gun, has strong armor and an upgradable MG42 on the top. It can take on any unit on the field.