Placement matches are your chance to justify or improve your automatch rank that has been collected for this tourney. It is an ELO based mini-league system that will involve matches played in tournament conditions.

Only 32 players will make the final cut based on all the information we will gather.

Head over to the placements spread sheet to learn your group, and to see your points be applied as you win games. The names of the group link to the thread on COH2.ORG for your group. 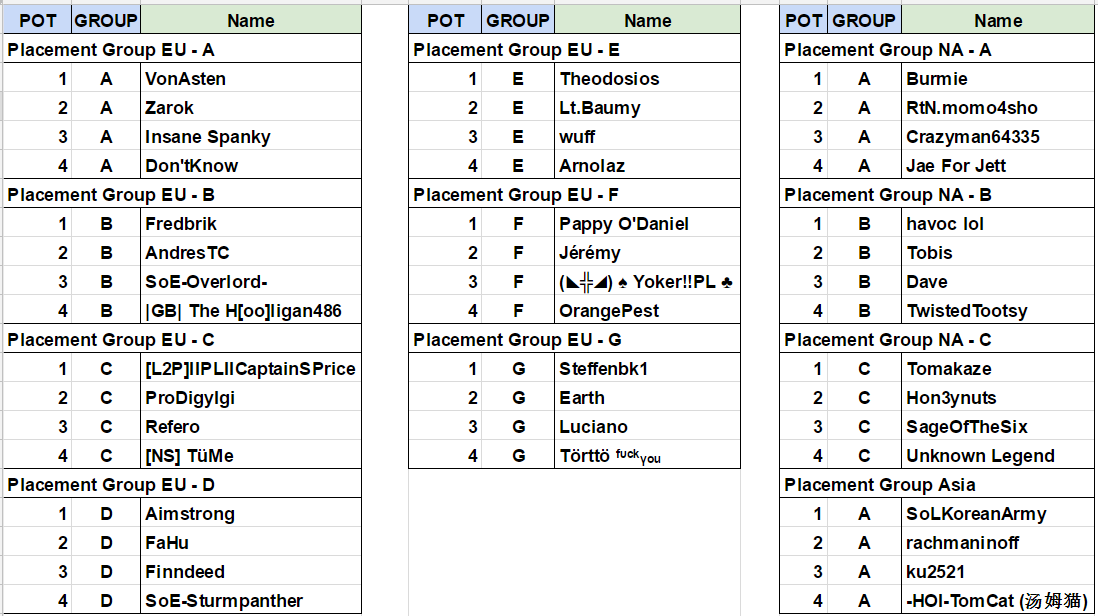 All automatch ranks have now been collected and you have been grouped in groups of four. Firstly by region to allow you to organise your matches easily, but also by evenly splitting the skill levels (like a pot system in group stages of football tournaments).

You are to play each person in your group in two games one as Allied one as Axis. Three matches, six games total. Organise the matches by adding your opponent in steam.

All matches should be competed under the general match rules of GCS except length of match etc.

Use G.C.S. Battle Planner to choose which map you are playing on and which factions for the first game. It requires a Steam sign in using Steam's remote log in (similar to Facebook on websites so no details are collected). - feedback.

This amazing app has been created by Qvazar who will be paid through the GCS Kickstarter. It is astonishingly cool work.

This will be an automatch style ELO system - there will be a hidden ELO for each of the players based on their automatch ranks, beating a high ranked player gets you more points etc.

This will be hidden during placement matches but all ranking, points, and seeding will be made publicly available before the tourney starts.


You must play all matches

If you approach every player in your group but are failing to organise all three games close to the deadline, document it and post it in the thread for your group.

Not playing all your games and not trying to organise them, results in severe penalties which could result in your rank falling outside the 32 places.

If by 16th April you have not played their placement matches through no fault of your own, we will organise emergency matches between groups.

The winner of each game must be be posted to the individual thread for each groupin question. This is how results are reported.

There are two games in each match so if the match ends 1-1, both players must post the game they won in that match.

Players foreign to the UK must be a passport holder or must show that they plan to obtain a passport. Each player must take a photo (or scan) of their passport detail page and send it as an attachment to redditcoh@gmail.com subject: <playername> passport. This will stay confidential and is to prove players are eligible to travel.

For all players unless you have sent your passports in by the end of placements you will not be allowed in the tournament. This is unless you email explaining the delay and show you have applied for your passport.


North America/ Asia Players Flights
Any players from North America or Asia who would like to come to the finals anyway please pay for your flights up front if you can, we will still give you cash of £400 if you make the semi-final anyway on top of your tourney winnings!

If you pay for your own flights as soon as possible you can enjoy the final even if you don't make it, and you might save everyone a lot of money. (You will want to fly into Manchester or Heathrow by at least 30th June; accommodation and other details will be announced closer to the time.)

I read the player names in the op and got all excited that so many great players will participate in the world cup thing. Then I realized...
PAGES (1)