Plane crashing out of hand 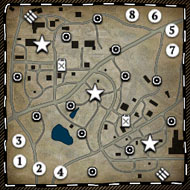 I know something was done about this earlier. previously they used to go off with the blast of a sturm tiger if they landed on your men. Still the game is sending a lot of planes on collision courses with ground troops. I mean like directly into them. I had at least 2 instances in this game. I think there was more and I'm just 1 of the 8 players. I was repairing a jackson with the crew, fucking nose of a stukka goes right into the top of the head of the tank crew! My vet3 mortar that I had kept alive for the whole game, killed by a fucking plane crash! I know this game is calculating collision courses with players. The games programming likes to do it. It's pretty damned predictible sometimes where shot will land. Typically if a shot rolls as a miss, the code will want to send the stray shot into something that will break, as opposed to just sending it into the ground. This is getting really stupid sometimes.
PAGES (1)

Subscribe to thread
COH2.ORG » Replays » Plane crashing out of hand