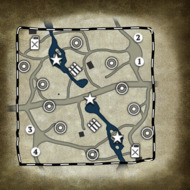 No chat in this replay.

Low level game. I wanted to show my build that looks very strong.
Heavy T1 + 1 Su85.
Dont know why never saw strong players do anything like this. For example why anyone uses cons who looks way weaker than penals. Esp in late game

The short answer (just trying to give perspective in a friendly manner) is that Su-85s suck... terribly. They're super bad.

Well managed conscripts dominate early game, giving Soviet a considerable map-control advantage which can then be leveraged for either a fast medium tank (not super popular or safe) or build up a big fuel bank for T34/85s or Is2s. Vet 3 cons are good enough against anything that isn't Obers (and maybe falls) to merit their cost and the investment in them early on. Plus, late game you need them around for AT nades.

That's not to say that T1 is bad - flamer M3 is super good. I'd sometimes like 1 squad of penals around, but mostly on urban maps where their flamethrower will get a ton of use.

Anyways, you need to learn to love Cons as a Soviet player

I opened with 4 cons all 200 hours I played coh2. Yes they are OK in the openning. But I found them very bad in late game in general, esp stoping infantry blobs. While penals have more health and dps even without flamers, and early they can defeat sturmpios(320 mp) 1v1.
They deal with most of the late game blobs except if they are outgunned with mass obers and nades. They even win vs obers 1v1.
Thanks for info.