The Theater of History Episode 4: The Panther

by FichtenMoped 26th August 2014, 01:01 AM
Hello and welcome to the fourth installment of "The Theatre of History"!

As chosen by you, the community, I now present to you all the Sd. Kfz. 171 or better known as the Panzerkampfwagen V “Panther”.


The Panther presented in Company of Heroes 2 is the Ausf. A for the Wehrmacht (Ostheer) and the Ausf. G for the Oberkommando West. Both tanks have almost everything in common but differ from the first “Ausführung D” in the choice of the turret. In the game, the Panzerkampfwagen V features the exact same role as in WW2: It is a mobile tank with good armor and high damage output.


After the successful attack on the Soviet Union in 1941 and 1942, the Wehrmacht began to face more and better Russian Tanks such as the T-34 or the KV-series. The main tanks of the German forces were the Panzer III and IV which struggled to penetrate the sloped armor of the T-34 or the thicker armor of the KV tanks, because they were mainly armed with the 5cm KwK (Pz. III) or the low velocity and short 7.5cm KwK (Pz. IV). The OKW (Oberkommando der Wehrmacht) decided to build a better tank after capturing and investigating some captured T-34s. Daimler-Benz and MAN were charged to design the prototypes. The one design suggested by Daimler was similar to the T-34 but had no functional turret when the presentation was due. The OKW decided to use the MAN prototype because it had more advantages like much better mobility, the ability to drive even underwater (due to its special engine placement inside the tank) and the drive was much more capable of being used for different purposes. The greatest advantage of the new tank was the sloped armor plates. The Panther-prototypes were the first German tanks using this style of armor placement. 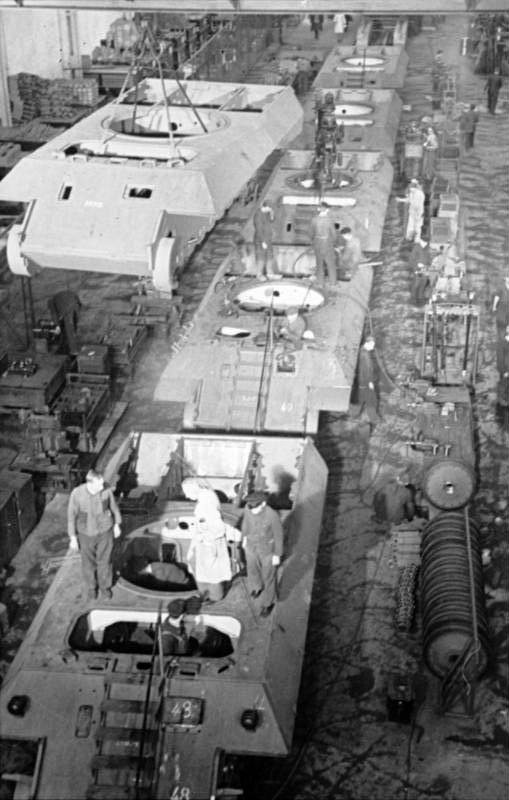 Production street inside the MAN-plant producing the chassis of the Panther.

After the prototypes had been tested and passed ready for production, the four main manufacturing plants started producing the tank in December 1942. MAN (Machinenfabrik Augsburg-Nürnberg, today mainly known for trucks), Daimler-Benz, Henschel and the Maschinenfabrik Niedersachsen produced about 6000 Panthers during the war of which MAN produced the most (2030). The costs of a Panther without a gun, optics and radio were around 120.000 Reichsmark. The “Ausführung D”, the first version of the Panther (which is strange because other tanks versions were labelled in alphabetic order), featured the Maybach HL210 P30 engine with 21 litres of cubic capacity and 650 HP. This engine featured an all new automatic Halon fire extinguishing system and could speed the Panther up to 55 km/h on roads. After 250 build units, the engine was swapped with the Maybach HL230 P30 with 700 HP which provided better acceleration.


The gun of choice on all three produced versions of the Panther was the 7.5cm KwK 42 L/70. It provided great projectile velocity and a very high accuracy on distances up to about 500m. [ At this distance, the gun was able to penetrate 124mm of armor with the standard projectile “Panzergranate 39/42”. With the “Panzergranate 40/42” it could penetrate 174mm of armor at a distance of 500m and still about 127mm at a distance of 1000m. The gun could easily take out almost every Tank and vehicle on the battlefield. The other way around, its frontal armor provided protection against every Soviet and American tank including the T34/85 and the SU85, as well as the Sherman or even the Wolverine. 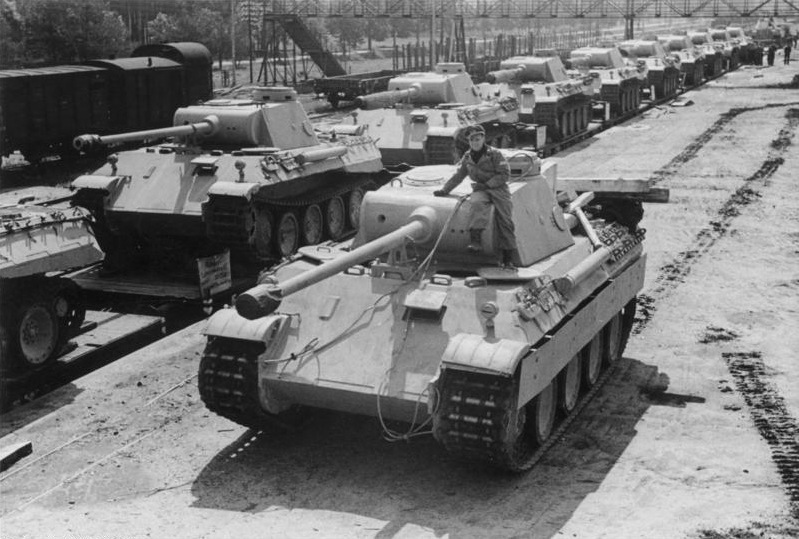 The first bunch of the Panther Ausf. A that was deployed to Kursk by train.

The first Panthers were deployed in preparation for the legendary battle of Kursk in July 1943. The tanks didn’t participate well in this battle: after 5 days, only 10 out of 200 deployed Panther were ready for battle. 23 tanks were destroyed by enemy fire, 56 were damaged by mines and enemy anti-tank-weapons and 44 suffered from technical problems. Besides the losses which were horribly high in the battle of Kursk and the early stages of its deployment, the Panther showed its great potential as a medium tank. Crews stated that on attacks by numerous tanks, even the new and efficient T34/85 showing up on the battlefield in January 1944 constantly bounced off the Panther’s frontal armor and failed to penetrate. The Panther instead could easily take out these tanks, even when aiming at the frontal armor plates. In opposition to the strong armor at the front, the rear and side armor plates could easily be penetrated by the standard Soviet Tanks and anti-tank weapons. The first Tank that was able to take out a Panther when shooting at its frontal armor was the IS-2 heavy tank, which faced the battlefield in 1944. The highest number of Panther tanks on the Eastern Front was reached in March 1945, with 740 Panther tanks able to fight. During their deployment in Russia, the average number was about 300. 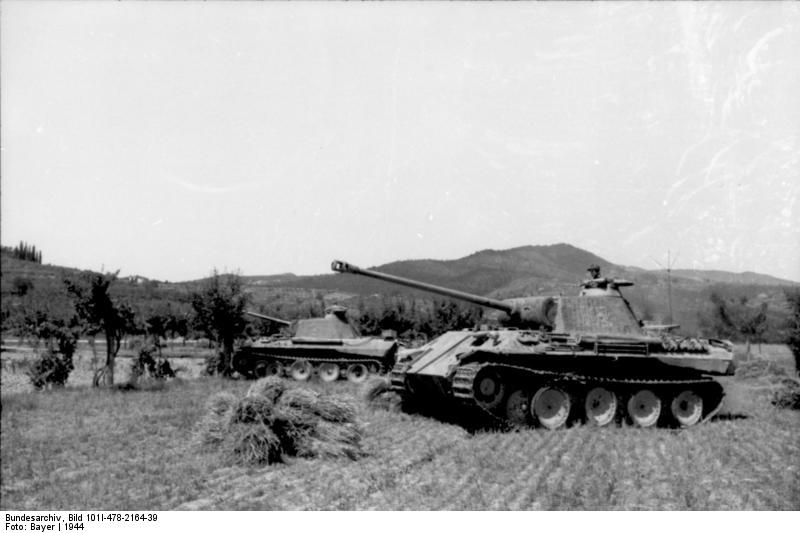 One battle group consisting of 76 Panther tanks was deployed in Italy in 1944. The group suffered heavy losses during the Allied push into the North but remained at an average preparedness of 20 to 30 tanks.

In the West, the first Panthers were deployed at the end of July 1944. 6 of the Panzer divisions in Normandy were equipped with numerous Panther battle groups. During the first assaults after the invasion until the end of July 1944, the Wehrmacht lost about 131 Panthers. The main foes of the Panther were the British Cromwell and Churchill tanks and the M4 Sherman tank from the American forces. Every one of these tanks could not penetrate the frontal armor of the Panther and had to aim for the side armor, whilst the Panther was able to take them out from a possible distance of 3500m, when aiming for the side armor of the Allied tanks. Due to the crisis on the Western Front after suffering a huge loss of territory in August 1944, the Wehrmacht deployed 7 new equipped Panzerbrigaden with 36 Panther tanks in each. In preparation for the Battle of the Bulge, 400 more Panthers were deployed. Although, the number of Panthers ready for battle was not higher than 471 at any point during the Allied Invasion. 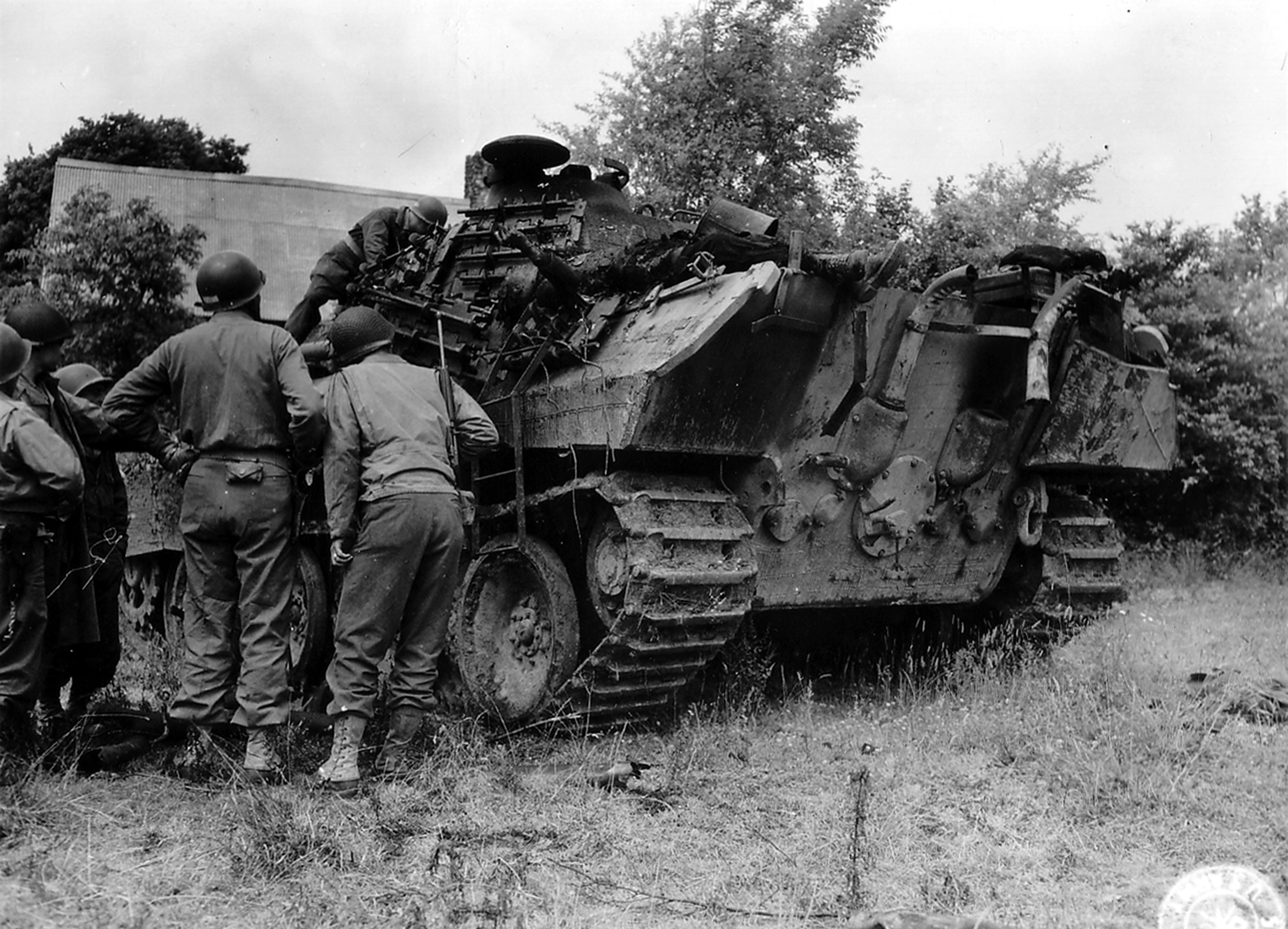 American soldiers in front of a Panther that was taken out during the early advance of the Allied forces in July 1944.

One of the most famous pieces of war reporting during WW2 features the battle between a Panther and an M26 Pershing from the 3rd US-Armored-Division, on the forecourt of Cologne cathedral on the 6th March 1945. The Panther (part of the Panzerbrigade 106) had just taken out a Sherman tank, when the M26 was ordered to take it out. War correspondent Jim Bates hid himself and filmed from a building near the forecourt. The Pershing hit the chassis of the Panther below the turret and set the tank on fire. 3 of the Crew members were able to escape from the burning tank and managed to flee from the scene. The two other members burned to death inside the tank, which was hit twice more. The wreck was popular with many war photographers. 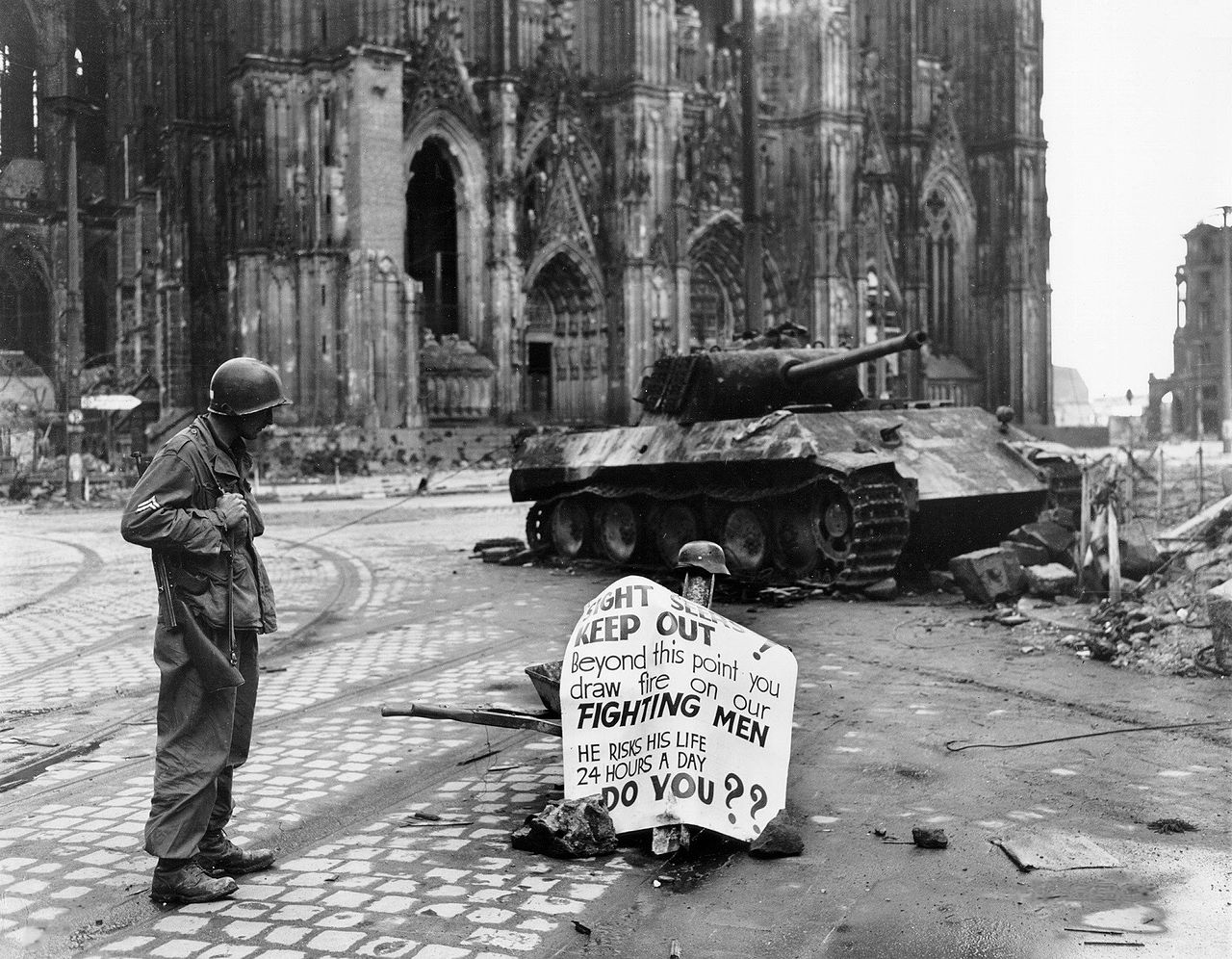 The destroyed Panther in front of the Cologne Cathedral.

During the war, the OKW planned to further improve the Panther, because its chassis, suspension and engine provided a great variability for proper usage. Here are some examples: 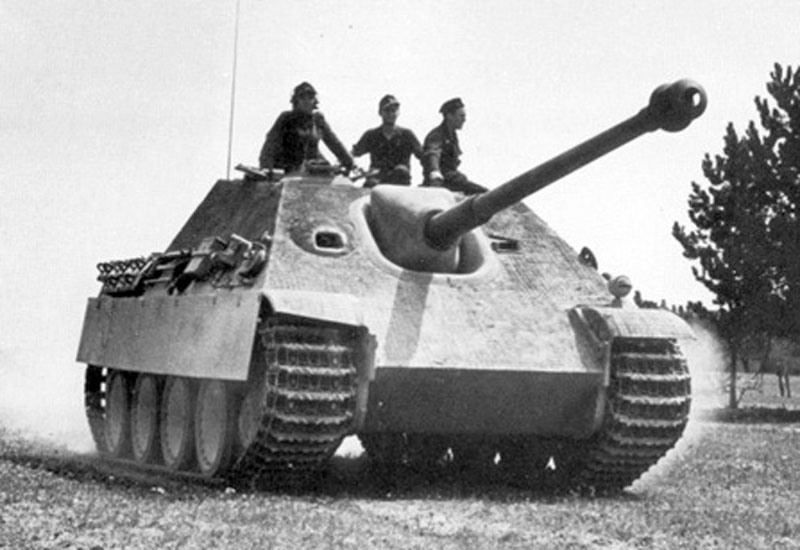 The most known modification based on the Panther is the Jagdpanther which featured the feared 8,8-cm-PaK 43 L/71 and was a successful tank destroyer, although not many of this type were produced. 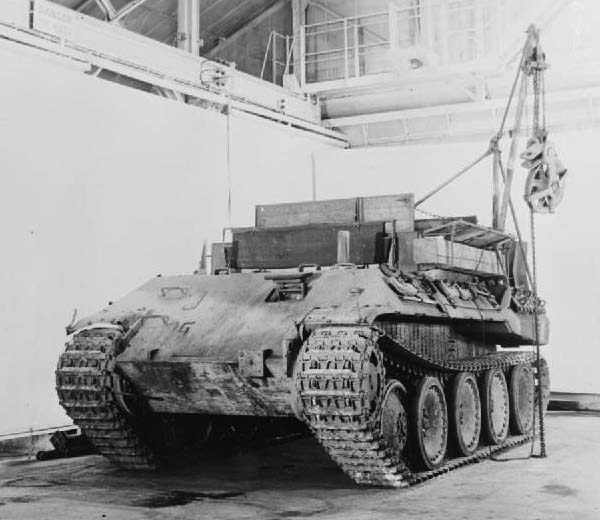 Another project that was realized on the chassis of the Panther was to equip it with a chain-winch and supply tools to salvage damaged vehicles from the battlefield. This version was called “Bergepanther”.

Some other planned vehicles should feature a 3.7-cm or a 5.5-cm-twin-anti-aircraft-cannon. The improvement to the Ausführung F should include a new turret called a “Schmalturm” which would have been able to carry cannons of larger caliber, like the 8,8-cm-KwK. The same turret should have been used for the Panther 2, but only one prototype of this tank was ever built Even a heavy anti-tank-gun carriage version of the Panther was planned. It would have featured the 12.8-cm-KwK of the Jagdtiger. 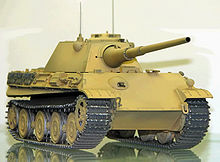 A model of the Panther 2 with the "Schmalturm".

The most innovative variant of the Panther was a prototype of the Ausführung G which featured a FG1250 infrared driving and target device mounted on the commanders hatch. In combination with the 60-cm-IR-headlight “Uhu” (which we already know from the WFA expansion) the Panther was able to see through a clear night at distance distances of about 600m. With the mounted headlight it could see at about 150m. Although it was planned that this device should go into mass-production, only a few of these devices were produced and used. 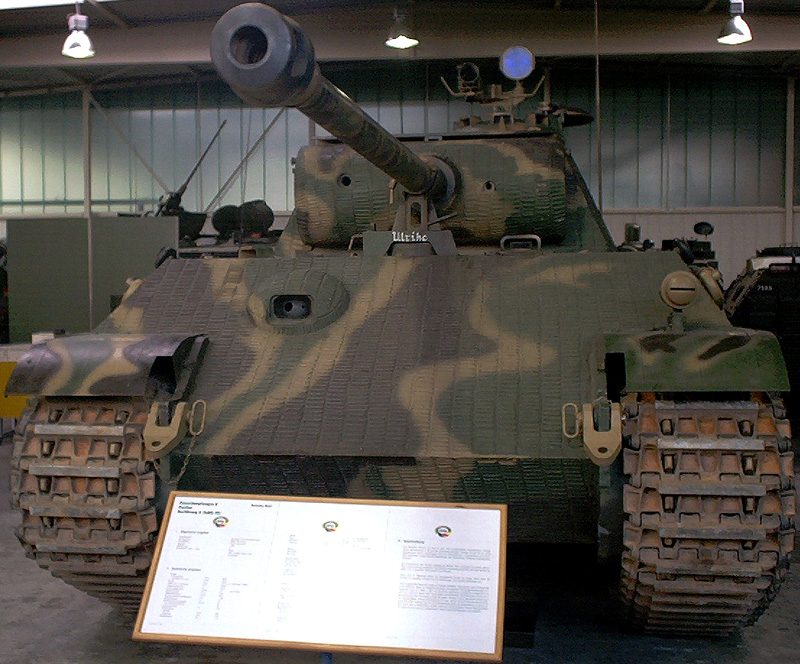 Panther Ausf. G with the FG1250 attached. This Panther is fully functional and stored inside the "Wehrtechnische Studiensammlung Koblenz".

I hope you enjoyed the fourth installment of “The Theatre of History”. Be sure to check
the voting poll for the next unit you want to see in “TToH Episode No. 5”.

Leave a comment with your opinion about this episode!