by Ohme 8th June 2014, 13:01 PM
Welcome back Company of Heroes 2 fans! Our coverage of the new Western Front Armies here at COH2.org continues today with a preview of the new German army being added, the Oberkommando West (OKW). Relic Entertainment streamed a cast of an Alpha match which gave us our first look at the OKW, as well as mixed-army play. The OKW feature some new and exciting game play mechanics, and our preview today will focus on known units, unique veterancy of OKW units, and an in-depth look at the new teching structure for the OKW.

Disclaimer: This article was written with information released publicly by Relic Entertainment. All unit descriptions, images, and details were taken from the Relic twitch.tv broadcast. Direct quotes from the broadcast are featured in this article.

Not the army it once was at its peak, but it still dangerous. The Oberkommando should portray the character of the German army around the time of the Battle of the Bulge – technologically sophisticated and hardened – but challenged by its reliance on heavy weapons.

IR Halftrack
Scans an area to detect Heat signature in the FOW.

The Kubelwagen carries a machine gun capable of suppression, and the IG 18 Infantry Support Gun takes on the role of a mortar. It can fire indirect fire barrages much like a mortar can in the Soviet or Ostheer armies.

The Sturmpioneer appear to be extremely deadly, and powerful. By observing the replay we can see that one Sturmpioneer squad takes up a whopping 9 popcap, far more than other faction engineer squads. In combat they can be seen to be very deadly. 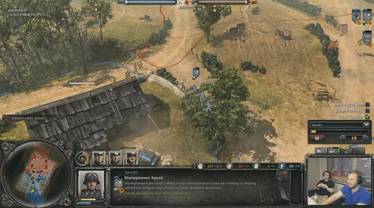 A commander ability titled "Heavy Fortifications" is listed with the Luftwaffe Ground Forces Doctrine which reads "Sturmpioneers construct Tank Traps, Flak Emplacements, and Trenches."
Relic has released more information about the Sturmpioneer at their community website.

The Volksgrenadier-squad consits of five man, and in the video displayed similarly to the Grenadiers of the Ostheer. In the video, a Volksgrenadier squad can be seen with the upgraded anti-tank weapon, which appears to be a single Panzershrek. OKW players can order this unit from their starting HQ. 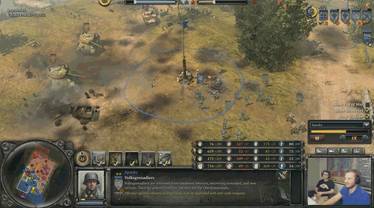 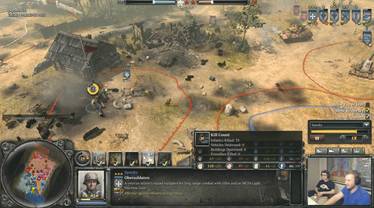 
The IG 18 is a new type of indirect fire unit for the OKW. It can be seen in the video barraging units with great effect. It appears to cost 480mp, which would infer greater strength than the 240mp mortars of the base game. 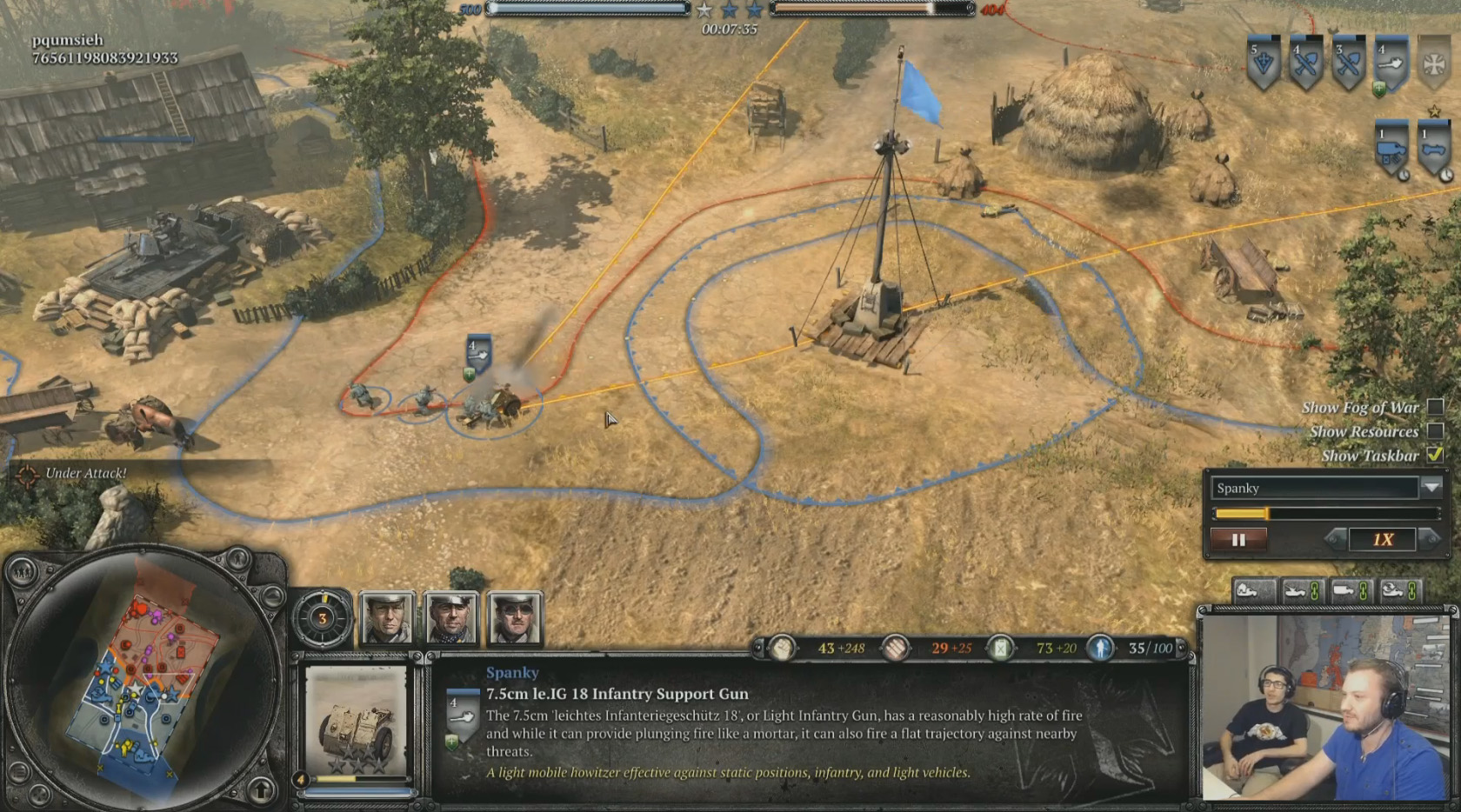 The IG 18 also features a new type of mechanic introduced with the Western Front Armies which gives some indirect fire a greater ability to lob rounds over obstacles such as buildings.

Other Infantry
Several other infantry units are listed under commander abilities, but were not seen in game. The Luftwaffe Ground Forces Doctrine listed Fallschirmjäger and Mg34. The Breakthrough Doctrine listed a Sturm Offizier which can "improve nearby infantry and has a number of abilities to weaken the enemy." as well as Panzerfüsiliere which are "adept at recon and long range combat."


The Kübelwagen is also ordered from the starting HQ, and can be a very effective unit in capable hands. Observing the video closely, you can see the Kübelwagen has two "modes" it operates in. While moving and shortly after stopping, the unit acts like a regular light vehicle with a machine gun on top. After being stopped for a few seconds, the Kübelwagen is capable of suppressing infantry. 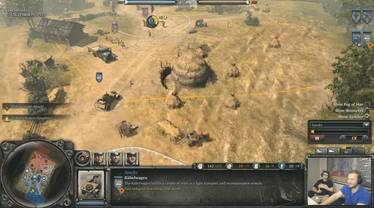 An astute member on our COH2.ORG forums pointed out that when the Kübelwagen is ordered by the player, it has no fuel cost. This is in contrast to other light vehicles which uniformly cost fuel. We also get a glimpse of the Vet 1 bonus for the unit, which reads "gains detection, revealing nearby infantry units on the mini-map."


The "King Tiger" is without a doubt one of the largest heavy tanks we have seen to date. Relic has released an extensive preview of the King Tiger at their community website.

Perhaps one of the most interesting revelations in the stream was the Tech Structure of the OKW. The Tech Structure for both factions is still under NDA, but close inspection of the video provides us with the information to create a rather in-depth look at the new mechanics. Early on in the stream we were cautioned about the fact that this is still in Alpha, and changes are likely still on the way.

Reminiscent of the British in Opposing Fronts, the OKW base buildings are deployed on captured map territory, and not in the base sector like other factions. The OKW also has a severely limited economy, gaining fewer resources than the other factions. Teching to new tiers with the OKW is accomplished by deploying a supply truck on captured territory.


When the game begins, an OKW supply truck is deployed after 15 seconds (from the video). This truck is then driven to captured territory, and provides a bonus to the resources provided by that territory. After a truck is deployed, a timer of 150 seconds can be seen to appear on the UI counting down the arrival of the next truck. This continues until the player has three trucks on the field. 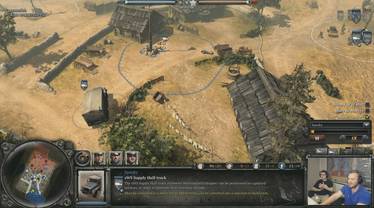 This element is core to the gameplay of the OKW, which is balanced around having fewer resources when it comes to fuel and munitions. At one point in the video the OKW player is generating 19 fuel per minute, while the Ostheer player is receiving 36 fuel per minute. The munitions were also reduced by a similar ammount.

When a truck is deployed, it can provide powerful capabilities in addition to providing access to new units. The OKW player on the stream built each tier available, allowing us the opportunity to examine each structure more thoroughly.


The best part about this structure? 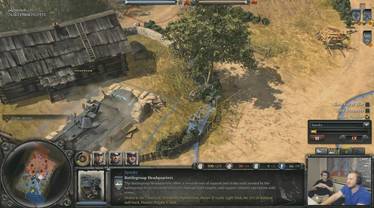 Yes, that's right folks - the building has a 37mm flak cannon on top. In the video it can be seen inflicting a lot of damage against advancing troops. Shortly after, developer pqumsieh chooses to avoid fighting the gun and flank elsewhere. The gun seems powerful enough to be a strong deterrent against advancing infantry and light vehicles.

Just a short while later, we witness the Soviet and US Forces player assaulting the flak gun head on. The truck appears to be quite strong, but is still vulnerable to fire from things such as an AT gun or satchel charge. In this game, the Soviet player lobbed a satchel from over a building, inflicted heavy damage, and the US Forces player finished it off with an AT gun. 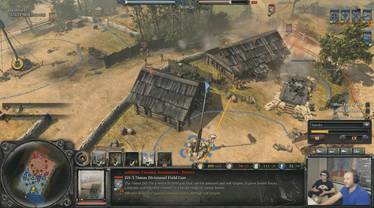 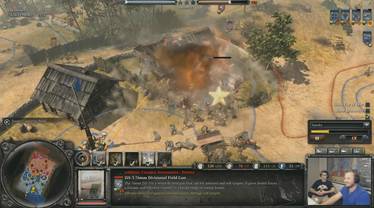 
In addition to calling in a slew of vehicles to counter any threat, the Mechanized Regiment HQ serves as a forward healing and reinforcement post. It also appears to have a purchasable upgrade allowing forces to retreat to the HQ. 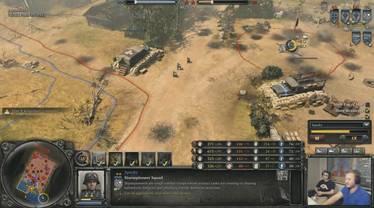 The capability of the Regiment HQ and the Battlegroup HQ provide players with several meaningful choices about their tech structure. Not only are players choosing to tech up for units, but they are also able to choose to deploy a potent forward base. Relic developer Peter Qumsieh shared some thoughts in the video regarding this element of game play.


The "Bulge" is a game play element enforced by the potency of these structures and their ability to be placed on captured territory. This is in clear alignment with the oft-mentioned Relic philosophy on Risk vs Reward. Do you place your Flak gun and forward HQ close to the lines and easy to protect, or forward towards the action?


It was mentioned in the video that a player cannot deploy two trucks on the same sector. This would mean that in order to, for example, protect a forward healing base with a flak gun, they would need to be deployed in two separate sectors that are nearby each other. While it is a powerful option, it was noted that two different players can both deploy on the same territory, creating team synergy.


Unlike the other two tech structures, the Panzer HQ does not provide the same "Front line" bonus associated with the Flak gun and forward HQ. Although the mechanic is not fully explained, this structure is capable of converting munitions to fuel, and vice versa. 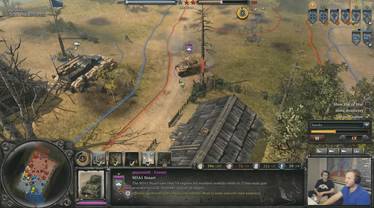 It is also worth noting that when the half-track deploys into a structure, it does have a "build time" associated with it. When a building is being constructed it is extremely vulnerable to small arms fire. This would make it risky to deploy a structure in the heat of battle.


Players who are too aggressive with their structures may regret losing them. Keep in mind that the trucks are free, but deploying them into a half track has a manpower and fuel cost associated with it. What happens when one dies?

On the differences between OKW and COH1 British Army

Thank you for reading the COH2.ORG preview of the new Oberkommando West being released in the Western Front Armies standalone expansion for Company of Heroes 2. We are pretty darn excited, and we hope you are too! Stay tuned for more information!