I want people opinion on this. I play a lot and mostly 3v3 and 4v4. I like all faction and play them all but every fucking time i play an Allies faction, my partners are horrible. Yesterday all my Axis game were super easy win.

So its either i get hard match and rage as an Allies because i must carry the partners or I play Axis and find it super boring.

This is super toxic for the game as many regular players know that they have better chance to get better partners in the Axis so im sure they simply avoid to play Allies.

I am alone who have this feeling?

I do feel Allies might have some issue in the very late games but its VERY minor issues. These issue is just that they are harder to play in 3v3 and 4v4 because the tanks are more easy to kill. So the newbies just have more difficulty to play them.

Relic could not do something to fix this for the 3v3/4v4 so when i login and search i dont see 90% of players searching with axis...

They should prioritize AT vs AT and Randoms vs Randoms, because especially in a 4v4, your personal contribution means nothing if your partners are brain-dead.

As you rank up (and you still need to) you will be matched with skillful allies. The road up is hard. This is true of all factions. I remember the first game as OKW in 4v4 I had more damage dealt than my entire team combined with an added 10,000 damage to boot, as such we lost badly. Needless to say, not great teammates. Now that I have ranked up I don't run into those players as teammates anymore.

Push through you will notice a significant increase in the efficiency of the skill matching.

Also please do not lol at players looking for advice, it is a fair problem.

Ostheer Medium Tanks: There were units here, but a Jackson killed them all

He founded the Angry Bears and got great players to play with him 4v4, no matter the faction. Inhouse 4v4 with the Bears vs. Bears are some of the best games to be had.

lol. I hate you so much. My opinion on 4's balancing stands.

Want my take on it? Here.

Literally nothing has changed.

SU Medium Tanks: There were units here, but a Panther killed them all

Yeah you guys just prefer to post "lol" instead of discussing the issue that we all know exist.

Why do you think almost every time i login to play, whatever the period of the day the average of % people searching is 75 axis / 25 allies.

Btw I am pretty sure my rank has not much to do, im pretty high ranked with the USF compared to the punks i get match with.

I start to believe that the longer you search and dont find opponent of the same level the higher the range of opponent goes. So if im searching a game since 5 minutes their system will match 2 opposing team that should not even play against each other.

They must be using a system that make an average of all players in the team vs the other team average, either its rank or ELO.

And dont tell me the higher you get ranked the better the matchmaking is. Yesterday i played games with axis, my partners had all had 2-3 stars and the opponents had like 3 guys with no stars and 1 guy with 1 stars. And before you tell me stars mean nothing, i do know about this but we all know that a guy level of 50 with no fucking stars is a complete noob vs someone with 3 stars and 1000 hours of play.

Join a clan or become a 1v1 player. It's that easy (or hard). Or you can continue pulling your hair out in automatch. Your choice.

SU Medium Tanks: There were units here, but a Panther killed them all

At least Allies have units, I want to play with mediums, but they don't exist, the only OKW medium tank is in the worst OKW commander in the game.

And yeah we know that Panther is good, we all just wish there was other good fuel based AT options outside of a Elefant/Jadgtiger.

Join a clan or become a 1v1 player. It's that easy (or hard). Or you can continue pulling your hair out in automatch. Your choice.

Yeah you are right, when my friend was playing coh2 we were getting very fun and stressful 2v2 games. I like team games a lot. I prefer the action of a 4v4 but jesus could they make their game or system to give us fair match sometime even in 3v3 and 4v4.

Id say i get 1 good game every 5 games i play. The other 4 games are just a complete 20 minutes of newbs raping.

Yeah you guys just prefer to post "lol" instead of discussing the issue that we all know exist. 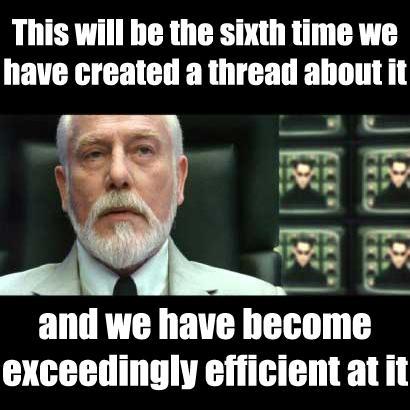 there are probably 5 billion threads with exactly the same subject.

Everyone with half a brain knows by now that the 3v3/4v4 balance is comically skewered towards Axis. The few people who deny this insanely obvious fact are uberfanboys and hopeless L2Ps.

So no offense but you're preaching to the choir.

The auto matches are always lop-sided because A) Axis are easier to play and B) Outstanding balance issues. No amount of forum rage posting will change that. The best alternative is to organize yourself with a group of friends so you can avoid random teammates.
PAGES (2)