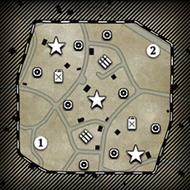 Anyone still doing replay reviews? I just came back from a very long break from COH2 and I'm struggling vs. Ostheer while getting some wins vs OKW. Thanks to anyone who checks it out.

There is nothing wrong with going extended tier 1 - it is all down to your individual play-styles. Pumping out infantry isn't a bad idea, especially if you can vet those squads up throughout the game. However my penchant for going for a fast tier 2 build is that, as a predominately Soviet player, this is the tactic that I struggle against most. In order to counter it effectively, a good Soviet player will need to micro a Guards/Car combo around all the vehicles, which is quite tricky to pull off, especially if you're behind on your timing. In this game, you could actually have warranted using the second MG as there were quite a few flanks on both sides of the map.

With the AT placements, having them "lined up" like that is only really a good idea if your opponent is just throwing vehicles in to your defenses. The more experienced players will immediately back out after an AT gun shot, or move to flank it. You did open it up better towards the end of the game with an AT on both sides, which just gives you a better chance of encountering and snuffing a flank attack.