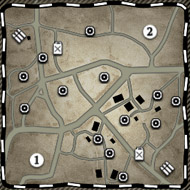 The 3rd Soviet Peasant Army are ordered to attack the Spanish Blue Division defending angoville. As the fights gets more brutal the Soviet High Command issues rapid conscription and continuous waves of reinforcements starts flooding from the mother land.

Taken from the reddit torney. To be fair jesulin raped me on other games but atleast i managed to beat him once.