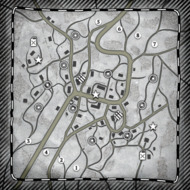 I am uploading a replay of a game where you can see how Katyusha is not simply a blob punishment tool now, but it oneshots whole squads during capping without prewarning with frightening reliability (you can hear the sound, alright, but I still cannot know where the rockets are aiming at before the first rockets appear; ironically when you blob you can predict fairly well where you have to retreat).

Also makes short work against static defenses and garrisoned units, but I guess that is one of the points of building artillery so I am not complaining much about that. I also am unable to put my trucks further forward because I know the Katyushas would just destroy them.

The problem in those team games is there seemed to be no way we would get to chase these things down without suiciding own units (and that would hurt us more than them). At one point I was hunting for them with my Puma long before they had that incredible tank army later in that game, but he has hidden them after firing and I couldn't find them. When their Stuart tank came after my Puma I had to leave. Later I didn't get the opportunity anymore to go for them, because I was busy with other things, I guess I can improve myself here, but it should show it is really not so easy to deal with it.

You can even see the Katyusha killing the Puma in the end.

If someone has constructive advice to offer to this (or other parts of the game) I am not opposed to it.
PAGES (1)