-USF 81mm mortar (also affects mortar HT) has 106 range (same as 120mm), fastest firing mortar in the game with a 1.6 sec advantage over ostheer one, and about half the scatter of any other mortar in the game plus scatter reduction veterancy at vet1 and vet2. (found by Cruzzi)

-OKW LeFH has 3 levels of veterancy.

-Game crashes if you reinforce USF mortar with sturmpioneers. Only works in automatch, mutiple people have this problem. (found by: JohnSmith)

-Volks that are vet 4 can only use their faust for one more time (then the faust icon disappears).

-Sturmpioneers can get: Shreck, flamethrower, and sweeper on one squad (found by: Waffaru)

-Kubelwagen still has engine damage after being repaired to full health by MechHQ Pios
http://imgur.com/Peljzis (found by: AtomicRockets)

-Captain's upgrade for one zooka has same hotkey as move attack command ("A"). (found by: Frost)

-The hotkey for Sturmpionier to build le.FH18 is R, same as Roadblock. (found by: Hikuran)

- Forward Observation Officer's Concentrated Sexton Barrage-ability description states that each available sexton will fire a 5 high-explosive shells at target, while in reality it fires 8 (found by: Waffaru)

-Schu mines inflict very little suppression. You have to hit more than one in rapid succession to actually become suppressed.

-TM-35 mines will often suppress a squad with a single hit, but then sometimes won't for no apparent reason.

-Soviet sniper squads also appear to only ever lose one model, while other snipers can still die outright to a mine.


Bugs not confirmed yet, that its caused by June 21 patch:


Thread will be updated if we find more..

The Panzerfaust deletes itself on Volks. I made a thread because I saw this here too late.

Another thing is that it looks like the US mortar doesn't actually get a range bonus at vet 3, as in its barrage range is not updated.

These bugs... all in all great bug, but sometimes it feels developers are so lazy, they dont test a shit - looking on Lefh (lol, not even testing about 5vet, and Volks seem more viable with 3 star vet now ;D, when they get vet 4, just send em to die)

I don't think the coaxial turret on the t-34/76 fires. Can someone confirm this? I may just be using the unit improperly but I can't get the turret coax to fire.

Hate USF mortar
makes 2v2s a nightmare more than they were.

I've won a 2v2 recently, but there was a message that said one of the players are taking awhile for the match results to load (something along those lines). The win has not been recorded on my stats for awhile now...

Is this new to the patch or should i just wait?

The MG34 in the OKW T0 has his own icon from the old commander abilities as a call in... why are we still seeing the MG42 icon? minor bug but still makes no sense

(not sure if bug or relic balance)

I think the Stumpio isn't a bug - remember sappers can get sweeper, and 2 piats/2 brens/ bren and piat.

I don't think the coaxial turret on the t-34/76 fires. Can someone confirm this? I may just be using the unit improperly but I can't get the turret coax to fire.

Did you check out if priority was on?

GrW 34 fires faster and the same distance, have you done some tests? Cos I did

No, i assumed Cruzz' was right (link). Did you use autofire or barrage? 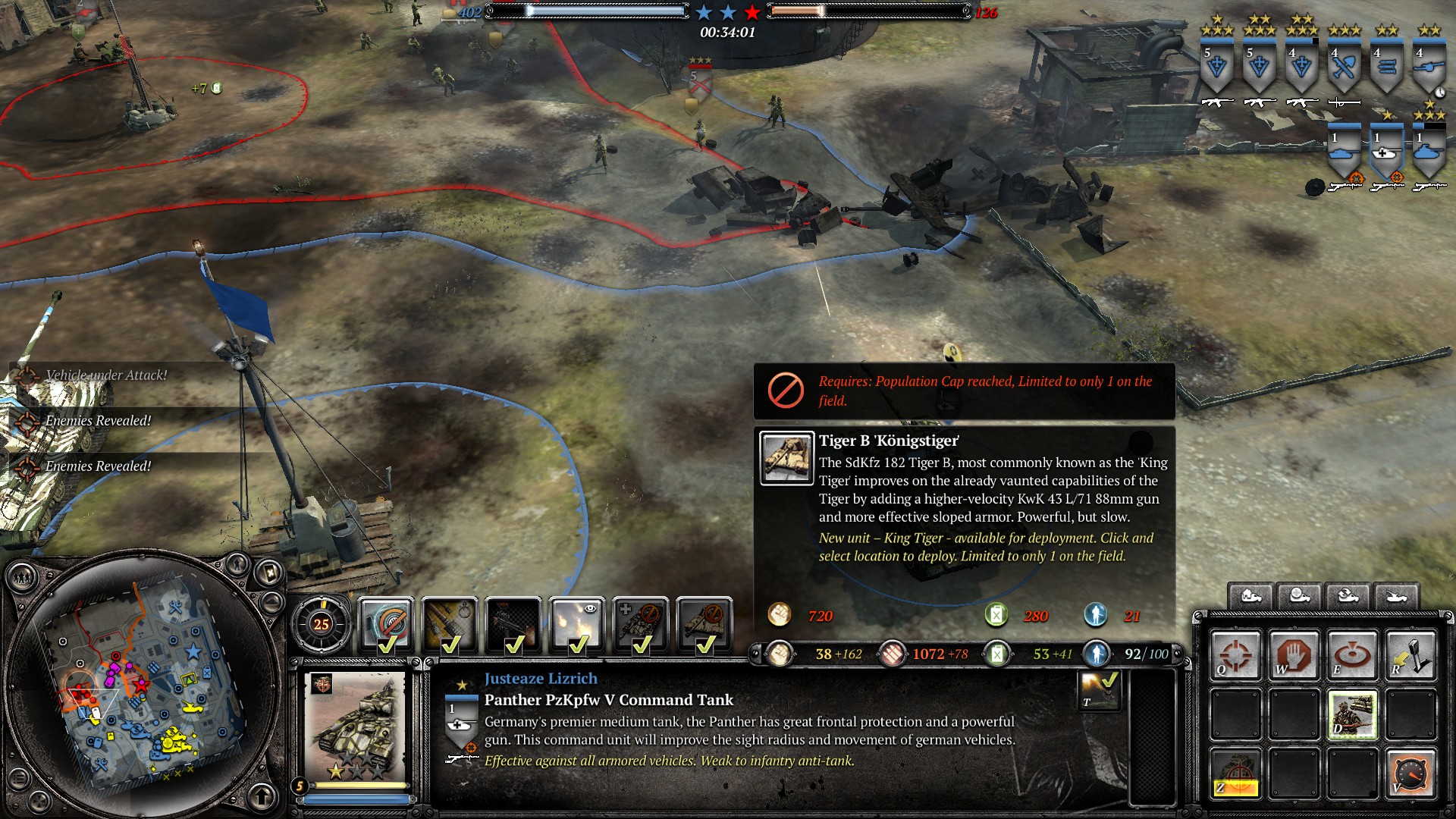 No, i assumed Cruzz' was right (link). Did you use autofire or barrage?