I've made this test as I've literally watched my rifles and rear echelon semi-behind green cover get decimated by pioneers which turned the corner near the fence on Winnekendonk, as you'll see from the pictures. So this was the first fight, ally capped the fuel, and I held the cutoff with my first units. Basically the first fight dictates whether I can get an AAHT at minute 5.45 or at minute 7 (if the cutoff happens).

So... the setup was: Rear echelon and rifle squad behind green cover. Since those are tank traps, not the best kind of heavy cover but oh well. Beggars can't be choosers. So 280 + 200 = 480 manpower squads, against cheaper to reinforce and build, double Pioneers.
Now, I'm fully aware that the real scenario fight, in a real game I've had (2-3 games ago, something like that), was extreme RNG. In that fight, pioneers just refused to drop. First squad that retreated was 10% hp and 4 models, and the 2nd pio squd forced my retreat (I focused one squad at a time). So I've went on to test the double pio charging vs rifle and rear echelon holding ground.

Setup to mimic the fight that actually did occur in a game: 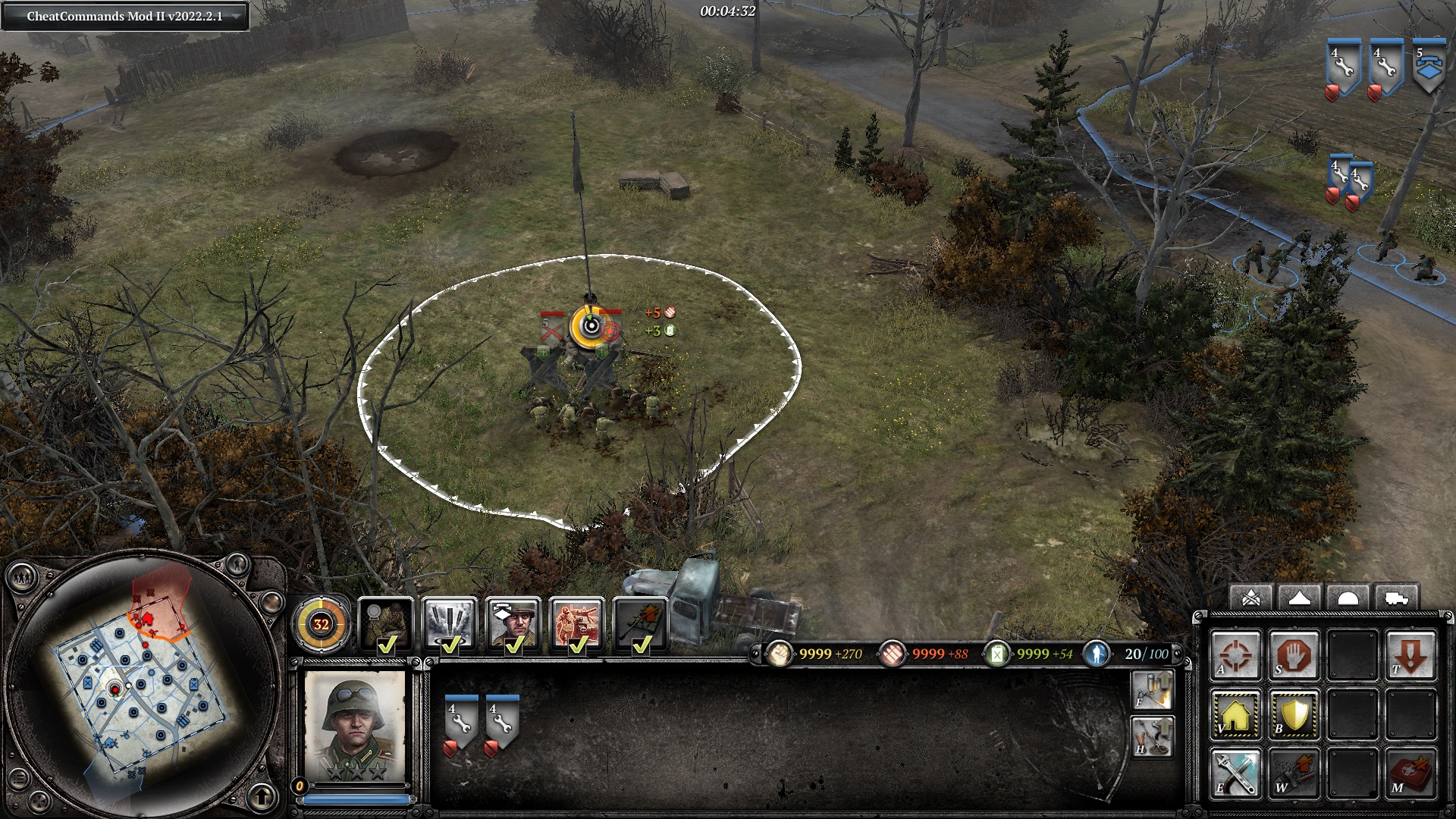 Pioneers charged from behind the cover, while I was waiting with rear echelon and rifle, while the 2nd rifle squad was going around to flank the incoming MG42 which would, I presume focus down the echelon and rifle behind cover. 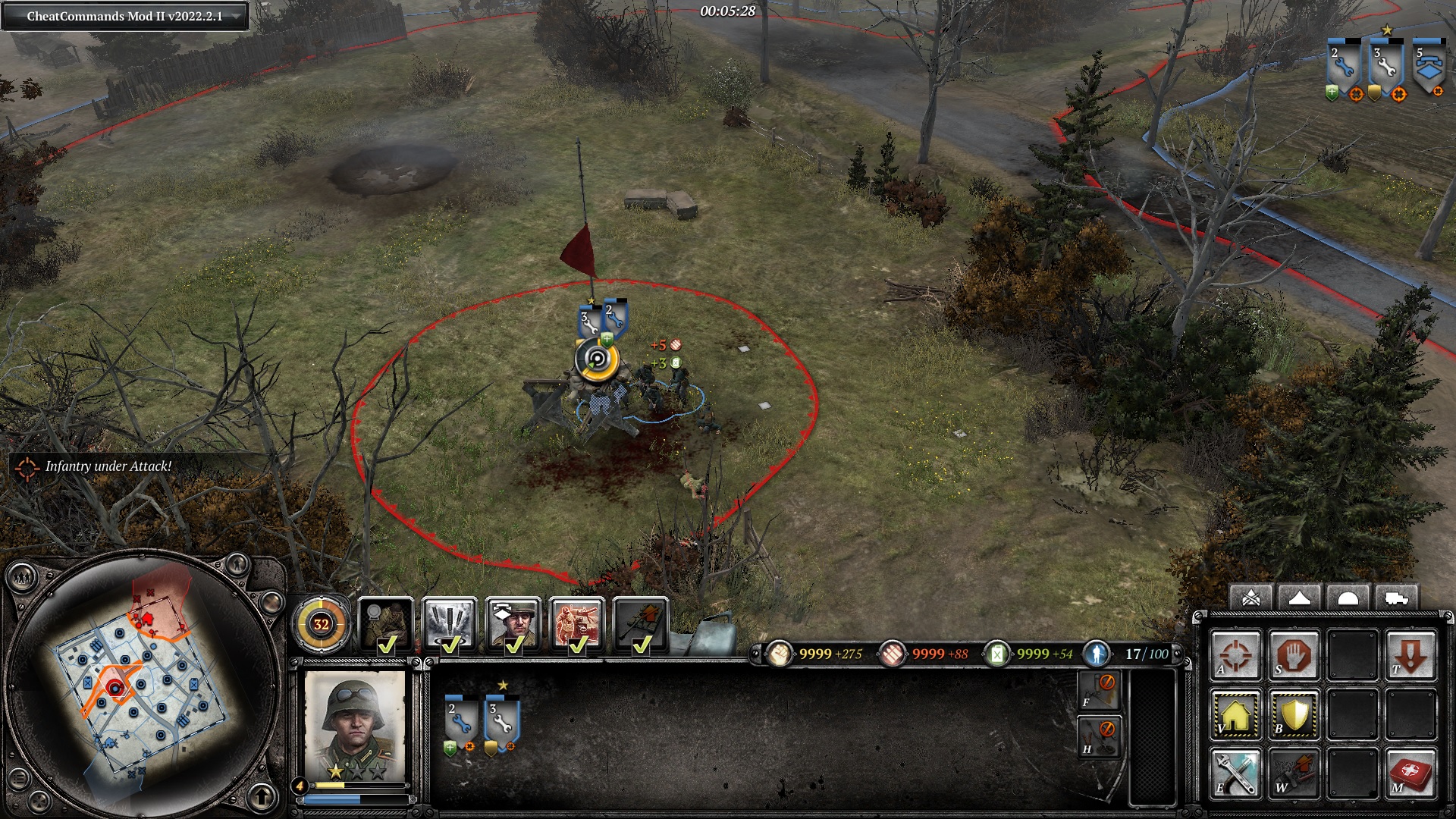 With the pios, I focused down the rifle squad first. I'm guessing this was another example of RNG because pios should in no way-shape-or-form win with 5 models left alive. And due to the angle of approach, the cover was inconsequential. Also, what contributed to such overwhelming victory is the fact that for some reason, rifles got buggy. They were not firing as fast as they usually fire, I presume due to targeting issues. It seemed like they constantly were switching which model to target. So I'm guessing this is just one of those RNG moments. 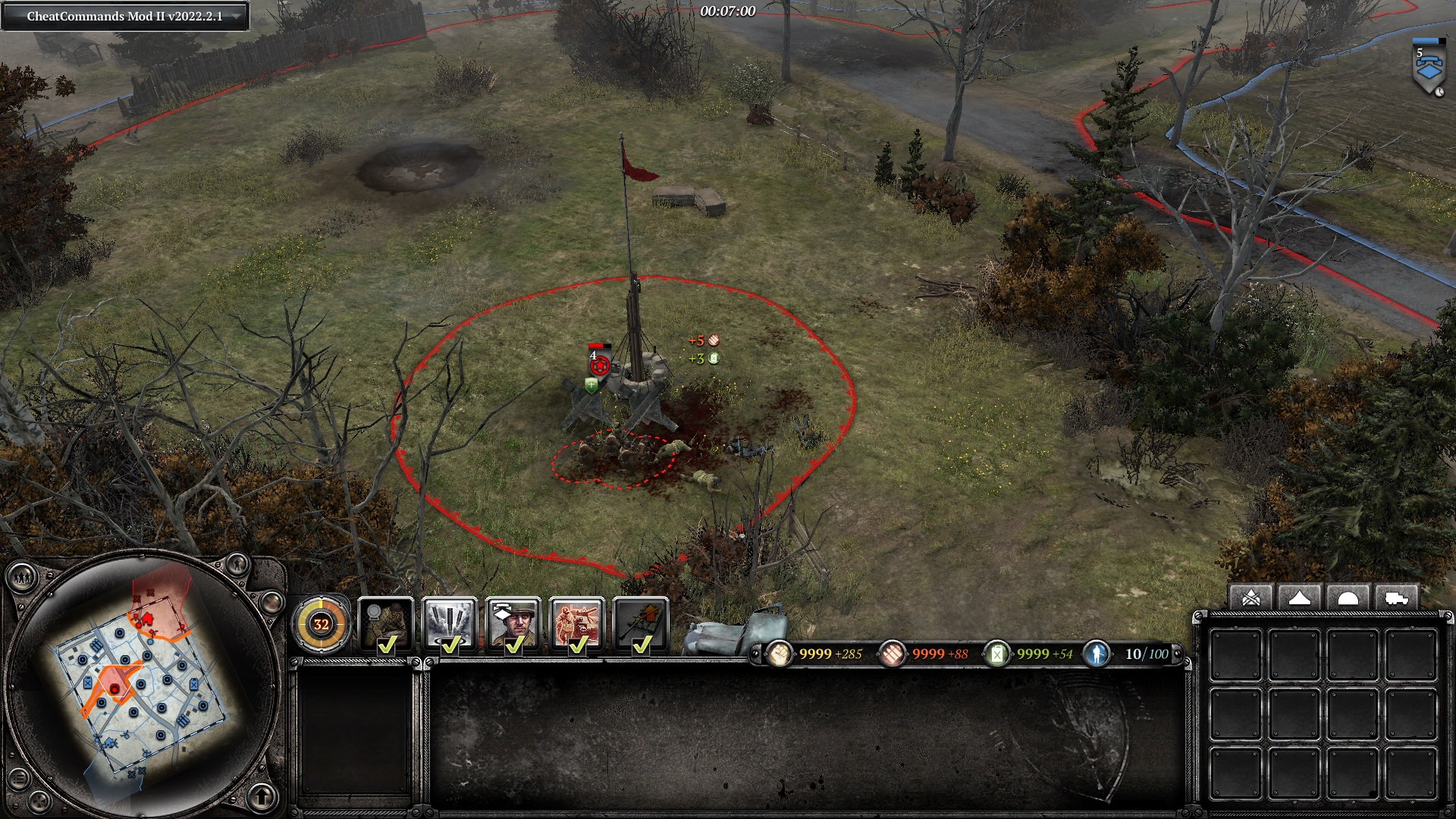 This time less RNG, I actually did win, but at the expanse of losing a rifle squad. Now, how the fight would have gone in a ranked game... I don't know. I'd probably retreat rifles at 2 models, and he would retreat the pioneers at 1 model. Still would be somewhat of a win for him, because on my frontline it would be the useless rear echelon, and on his frontline, it would be an MG42 with the incoming gren. So this is a Pyrrhic victory. 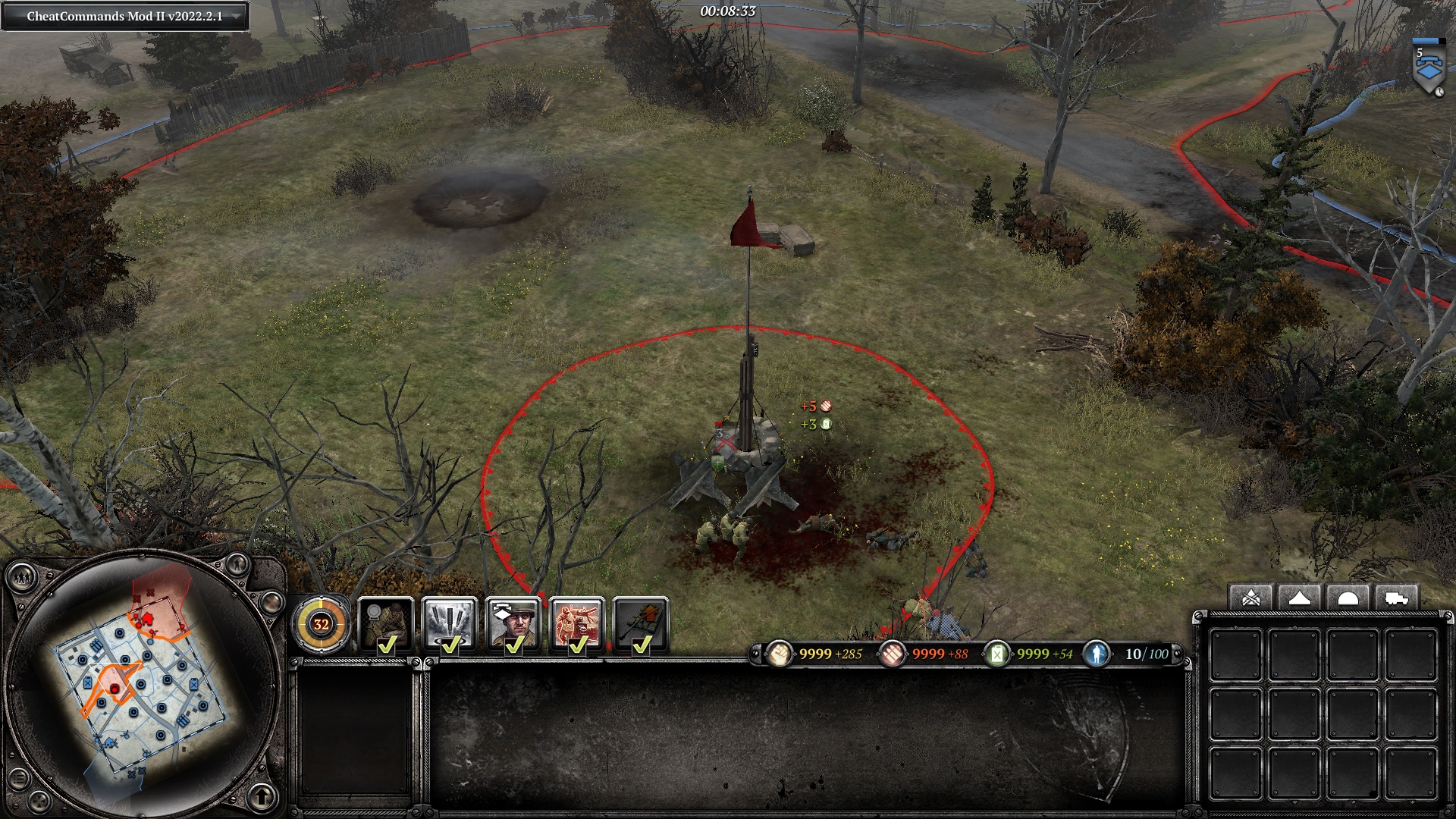 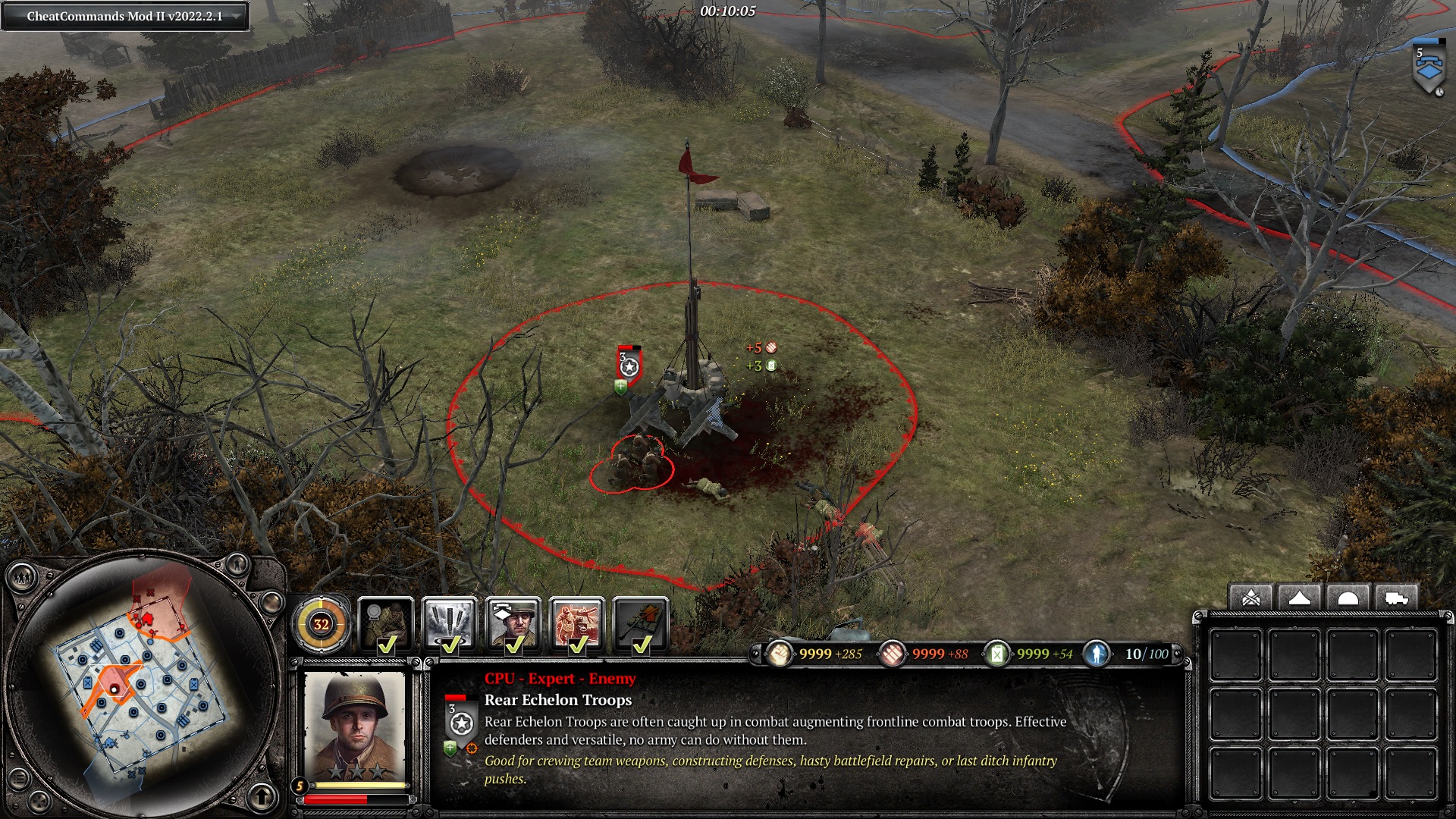 So this was done with the squads behind somewhat of a cover. I don't know how a cheap squad can gun down a semi-elite close range squad and another squad in their price range.
Pioneers should not really be combative enough to force such Pyrrhic victories. 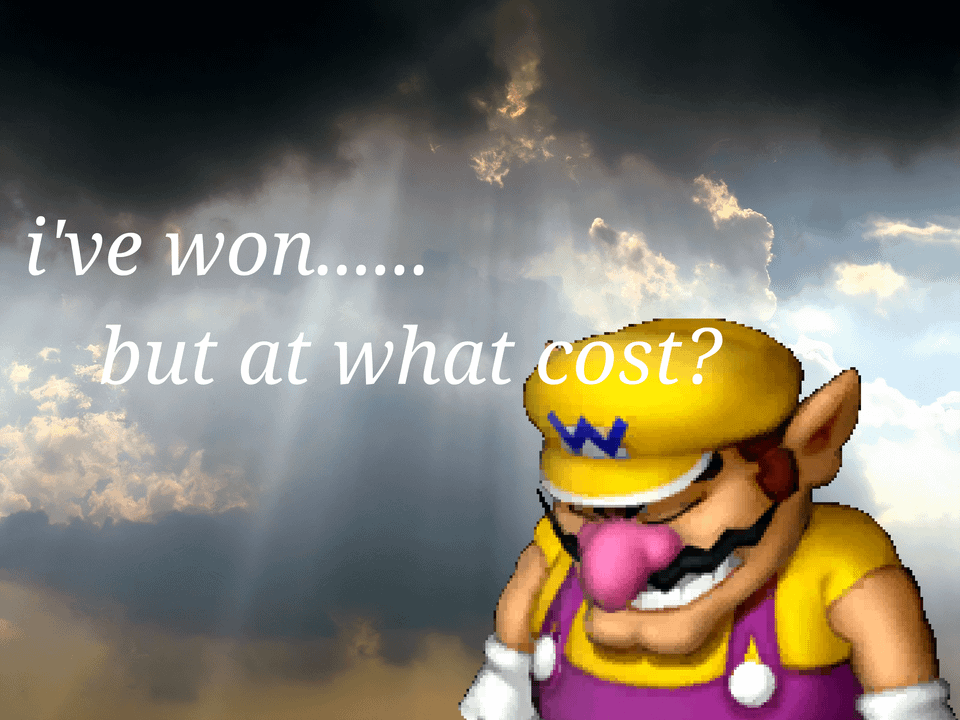 Now, I'm fully aware that their combat strenght falls down hard. But in teamgames, such fights dictate A LOT. The first few fights, where the RNG can swing in each direction, there should be some certainties. Like 480 MP with more reinforce beating 420 with less reinforce. Sure, pioneers can stay relevant up to minute 8 with the flamer, whereas echelon can stay relevant up to minute 15 with the zooks.... but still. Pioneers should get a buff somewhere else, and a nerf in their close range firepower.

EDIT/UPDATE: While I think that pio vision should be 40, not 42 (the only nerf they deserve)... after further testing, it's not that pios are strong, but that REs are dogs*it. I've placed REs behind green cover, on neutral terrain (sandbags on TestMap), and made PIOs charge them over said terrain... Pios won.
If you put Combat engineers behind green cover and let pios charge them, Pios lose hard.
So this is mainly that whatever squad you pair up with rear echelon, you can for all intents and purposes disregard the RE squad. It's like they are not even there.

Pioneer weapons are one of the weakest smg of all infatry. It does not need to be nerfed.

Further more double pioneer start is bad start, so there is little issue.

In my experience (pretty much exclusively 1v1, but the occasional team game), pios can just about trade favourably with concripts, but only for a short time at the very start of the game. For them to be able to win in your situation, it must have been a miracle from the rng gods, rare but it can happen.

Rifle+Rears are 480 MP combo. 280 if you consider that its your starting rear.

I assume, in your test you mimic Pios getting almost instantly into close range, from behind sight blocker.

So whats the problem here? Why pretty much 80 MP difference, should grantee a win against x2 pios, who successfully managed to get into close range without taking damage on approach?

Not to mention even if they did flank you like that, just back off and spread your units utilising range, pios have literally almost 0 damage at ranges. Garands are cool and all, but SMG is the SMG.

Rifle+Rears are 480 MP combo. 280 if you consider that its your starting rear.

I assume, in your test you mimic Pios getting almost instantly into close range, from behind sight blocker.

So whats the problem here? Why pretty much 80 MP difference, should grantee a win against x2 pios, who successfully managed to get into close range without taking damage on approach?

Not to mention even if they did flank you like that, just back off and spread your units utilising range, pios have literally almost 0 damage at ranges. Garands are cool and all, but SMG is the SMG.

That's actually about 3-4 seconds of charging to be on top of them. If you actually leave cover and run away, it's even worse. You can't really go playing dora the explorer as you know an MG42 is lurking somewhere, and it's a 3v3 map, meaning you can't really spread your forces thin. With 42 sight, they can easily on such maps stay out of sight, but not out of mind. Not only 80 MP difference: faster and cheaper reinforce (in 3v3, first 5 minutes dictate the next 15). Also, if you go and try to utilize the range... you'll most likely get pinned by the incoming MG42.

This sounds like something that could only happen on Winnekendonk. The opening engagements on those fuel points/cutoffs are always funky

Perhaps. Did test it out 4 times. RE+Rif do win, but not by a margin you'd expect. I mean, place a single spio in green cover and let rifles + RE charge it... Of course, you would never charge a spio. Point is, I used to think that rifles are not units that can be charged in cover by anything but a spio/assault gren/PGren. But turns out that simple engineers can charge them and... maybe not WIN. But definitely induce a larger MP expenditure, and cut down on map control more than you'll lose by retreating 2 pios.

This sounds like something that could only happen on Winnekendonk. The opening engagements on those fuel points/cutoffs are always funky

Shouldn't pios also suck ass too then? If nothing else why do they need 42 sight and decent combat ability, while the other squads do nothing without upgrades.

Well, pios won't carry zooks, but you won't use echelons as frontlines in anything above 1v1. Pios, unlike echelons of all engineers, can actually plant useful mines. I wouldn't neglect it as late game potential.

Shouldn't pios also suck ass too then? If nothing else why do they need 42 sight and decent combat ability, while the other squads do nothing without upgrades.

Pretty fair point here, maybe it should be one or the other? Sight or combat ability

Volley fire used to give REs some decent utility in early combat. I think it was definitely OP and maybe it's too hard to balance, but REs weren't as useless as now that's for sure

Both Rear Echelon and Rifleman do 8 damage per hit with the weapons that they have. The biggest difference though is that Rifleman actually have accuracy so the shots actually hit the enemy. With Green Cover Rear Echelon have roughly around 15% to hit an enemy While Rifleman would be at the 25-30% mark roughly. This is without factoring in target sizes and Veterancy buffs which add received accuracy.


Pioneer main gun does 4 damage with a similar chance to hit but due to being an SMG the damage is more consistent.

Rear Echelon's Carbine should do 4 damage as well and get a huge accuracy boost to compensent so that DPS ends up being roughly the same but less RNG based and more consistent since Rear Echelon doing damage is basically trying to win the lottery.


Meanwhile Pathfinders have 16 damage on their weapons while also having more than double the accuracy of Rear Echelon at any Range.

I always thought get rid of RE volley fire and give them some kind of a combat buff if a riflemen is near bye... this would make sense

Interesting argument, however your mother

Riflemen and Rear echelon are overpriced and get their value from overpriced upgrades.

There are 80 manpower difference between riflemen and pioneer, this should be a no match in every single way but nope. You know what's a no match in every single way? Grenadier vs Rear echelon, close/mid/long range doesn't matter, Rear Echelon will always badly lose. And that's fine because there a 40 manpower gap plus grenadier being mainline infantry and Rear Echelon being an utility unit.
So why wouldn't it be the same for riflemen vs pioneer?

The combat effectiveness of Pioneers is simply non viable.

Pioneer are already one of the most difficult units to vet so their combat effectiveness should not be reduced in anyway.

As for rear echelons they are one of the few units that get combat bonus of 20% accuracy at vet 1.

Both units are fine.

it is the RE squad that really sucks in combat. RE mp cost does not compare well to most other squads in terms of combat power (like the major....). So if you take two units and one of the is a RE, that team will lose the 2v2.

Interesting argument, however your mother

You are backing up your boyfriend's lack of skill.

First, you have volley on RE, 2nd it's rifles it will murder vanilla units closing in and on close-quarter. It's not RNG you probably issued attack command on sandbags/tanktraps. LOL

it is the RE squad that really sucks in combat. RE mp cost does not compare well to most other squads in terms of combat power (like the major....). So if you take two units and one of the is a RE, that team will lose the 2v2.

Most likely the biggest issue. Like aerafield said. REs have peashooters. Basically the weakest combat unit in the game until they upgrade to double zooks, at which point they have some use. I'd remove the volley fire and increase XP needed for vet1, to buff early game firepower. I mean, if USF already is a muni sink, with AT guns, weapon racks, etc. It's a shame that you need to waste muni at minute 1 just to be able to beat anything. Multiplied in 3v3s where the maps don't really have leeway in terms of "spreading out"

There is no issue with pioneers.

They are decent at the beginning, but fall flat on their face quickly. Spamming them is not viable, nor is even building a second one in the early game unless you're trying some odd double MG/double pio stall for PGrens.
In a normal build, you'll pay for it once LVs arrive until the mid game where you can finally use the increased repairs for your medium tank.

This overall sounds like a fair trade off to me, let them have their chance to shine.
PAGES (3)