George RR Martin is a beast, was on a plane flight with him about a year ago.

Rear wheel drive can be a bitch if you don't know what you're doing.

Aparantly a bunch of Corvette drivers have no idea.

So I bought me another RWD goodie 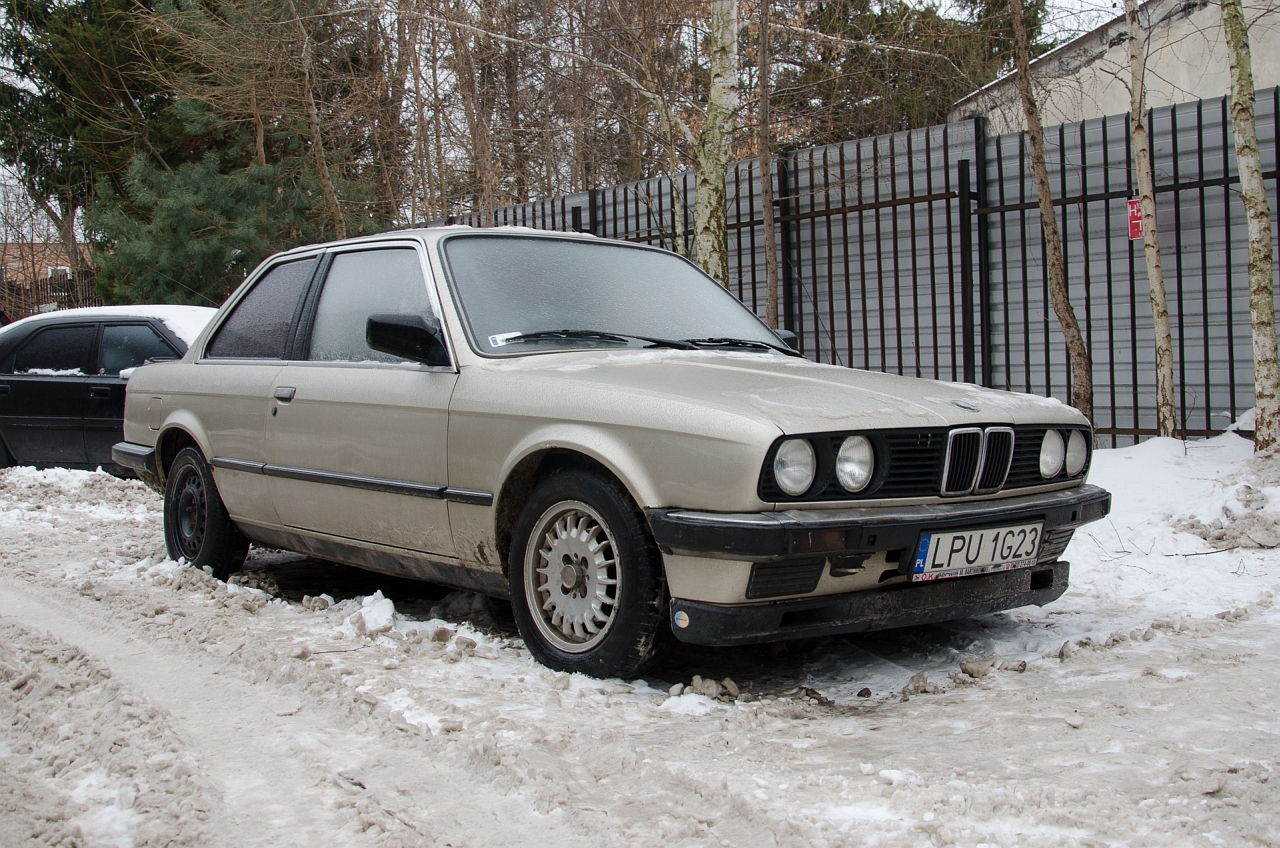 It's a BMW E30 from 1985, with a carb'd 1.8 liter M10 engine and a four-in-the-floor. Little rust and absolutely fucking disgraceful mechanical condition - destroyed suspension, brakes hardly do anything, oil leaks about everywhere, radiator leaks as well. Rear wheel bearings in dreadful condition, differential HOWLS whenever you go faster than 80km/h.
But it stubbornly doesn't want to stop running, the E30 had brought me 200km home after I bought it and still just doesn't want to break. Gotta love the 80' cars

I'm planning to install a short diff, get rid of any rust I find, upgrade suspension and brakes, fix what needs fixing and go autocrossing/classic car racing. Maybe swap in the M42B18 engine later on

Went to Texas World Speedway last weekend and had some fun before it rained and froze us out.

Here's my best session of the weekend.


This passing maneuver is what is called "Threading the Needle"


And here's a rainy session 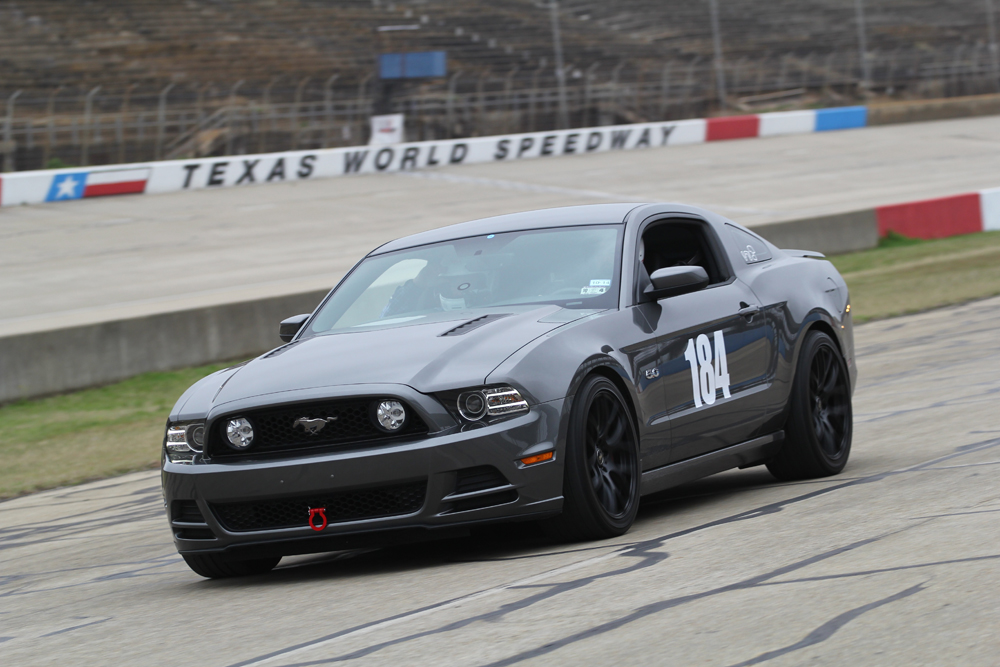 Your topspeed seems to be higher than most of the other cars. How much is it?

That brownish car in front of you in the first half of video 1 looks pretty unimpressing, street car like. But it keeps pace well enough. What is it?

What do you do wrt insurance? If you do. My insurance company would not cover racing, so a special insurance would have to be made. Probably cost me a gazillion?)

The car in front of me was a BMW 1 Series M Coupe and they're very good on the track.

I have to get racing insurance to cover me for the weekend in case something happened. The cost depends on how much your car is worth of course. For my car its around $225 per event for just insurance.

2nd best to driving, is riding.

We just had a sports car event this week end, and it was with a bunch of very flashy cars. Ferraris, Lambos, Cobras, Lotus, Ford GT, Jaguar and much more.

I got a ride in this one:

And this Jag F-type:

And I have to say that the latter is absolutely my favorite.

With 350-some bhp it has less power than the Ferrari, but it's a much more dynamic ride.

I also did some outside video, but it was with my cell-phone so it got too shaky and low quality.

Yea the new F-Type is targeting the 911 feel.

In case anyone else is interested in the Fiesta, here's something you should know.

Well, I've had the opportunity to drive the Fiesta ST a few times now. And this is my verdict FWIW when comparing to the Titanium version.

(Example. I drove a black version which looks really cool, but gets really hot

First thing you'll notice is the significant advantage in accelration. It goes about 3 seconds faster from 0-100 KPH/0-60 mph than the Titanium (hence forward the 'T'). But it should too, because it has an extra app. 60 HP compared to the T 125HP version. The ST should make it at just over 6 seconds, but I believe it may be able to do better because I can do better than 9.3 with the T. Hard to tell, though because it's got to do with the following point.

Second thing is no turbo-lag. This is an obvious advantage on a track, but not necessarily so on the street or road. The point is sort of you can only go fast or slow in the ST because everything kicks in so quickly unless you fiddle a lot with the clutch and speeder. The T has a turbo lag that you can manipulate to get just enough of a lead at green light, but without exploding forward, which is rarely wise in a congested city. Besides I sort of like the lag that kind of sucks the car into speed after a second. If you plan it right and time it with a gearchange, it'll give some very satisfying results.

Third is the general driving feel. The Fiesta in all kinds of versions is allready a very dynamic driving experience, and the ST is of course no exception. I'd say though, that the slightly different suspension does not make a hughe difference on roads (maybe on tracks, dunno). High speed cornering seems a bit better, but I'm not sure how much that is due to the actual suspension, and how much is just the ST having more pulling power. Cornering through throttle is an effective option for both of them.

Fourth is the gearshifter in the ST (manual 6-speed). I've seen it praised as precise and sharp. I dunno, maybe it's just me, but I don't think its better. It's got a more metalic feel, but the distance betweeen gears are just as long as in the T. IMO they should have given it a short-shifter (you can get that from unoriginal suppliers). The softer shifter of the T (5-speed) does the same job just as great, but maybe wouldn't be up to the task with more HPs. Possibly not.

The overall question is: Is the ST worth the app. extra 80% compared to the T? Well, I'm not sure tbh. Of course if money is not an issue, you just get the ST. But if you're trying to max your fun compared to money, I'd say the T is enough. It's got the same driving dynamics as the ST and if you mainly drive in urban areas, the ST is not going to give you that much extra for the money. Where the ST shines, is on the smaller, winding roads, but even here you can have fun with the T too.

Later this year, Ford is releasing an improved T in shape of the 'Black&Red' edition. That car gets an extra 15 HP plus some styling. It means there's going to be a middel-in-the-road for someone who fancys the sporty feel of the ST, but doesn't really have the option to use the full potential of the ST. I'd buy the Black&Red if I had to make a new purchase this year. I doubt that I would get full value for Money with the ST. Roads around here are too congested and speed limits are being lowered in most regions, making it very hard to find places to drive the ST as it deserves.

Another option for someone who thinks the Fiesta needs beefing up a Little, is to customise it. Well known companies like Mountune and Pumaspeed allready released various upgrades for as well the ST as the T. I honestly wouldn't know what to do with an ST at the top 250 HP, though. Considering the weight of this car, such power belongs on a track only, IMO. The T could use an extra 15 to 25 HP no problem, though. But the crazy app. 200 HP that some have crancked it up to, seems pretty hazardous? You'd then need disc brakes on all 4 Wheels, at least. 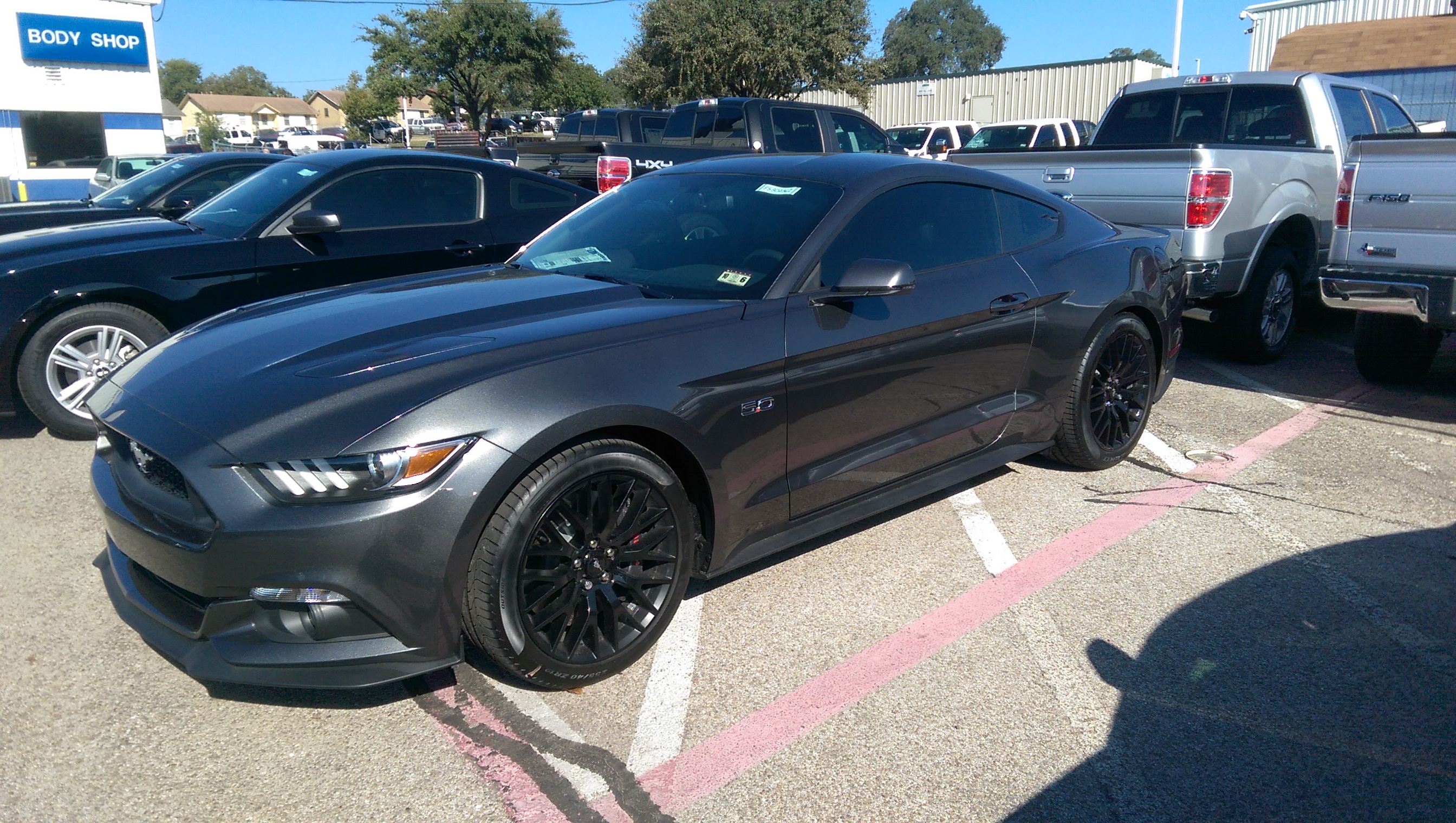 Wow I had a cargasm

I don't understand anything in here, I just look at pictures and thing, Oh that looks cool

Budwise that thing is pure sex, WOW! Hows the performance compared to your '13?

Handling is night and day better. With the stock Performance Pack setup it is about as flat as my 13 was with the full Ford Racing setup. I just swapped out the Pirelli's for Michelin Pilot Super Sports all around, next will be exhaust. 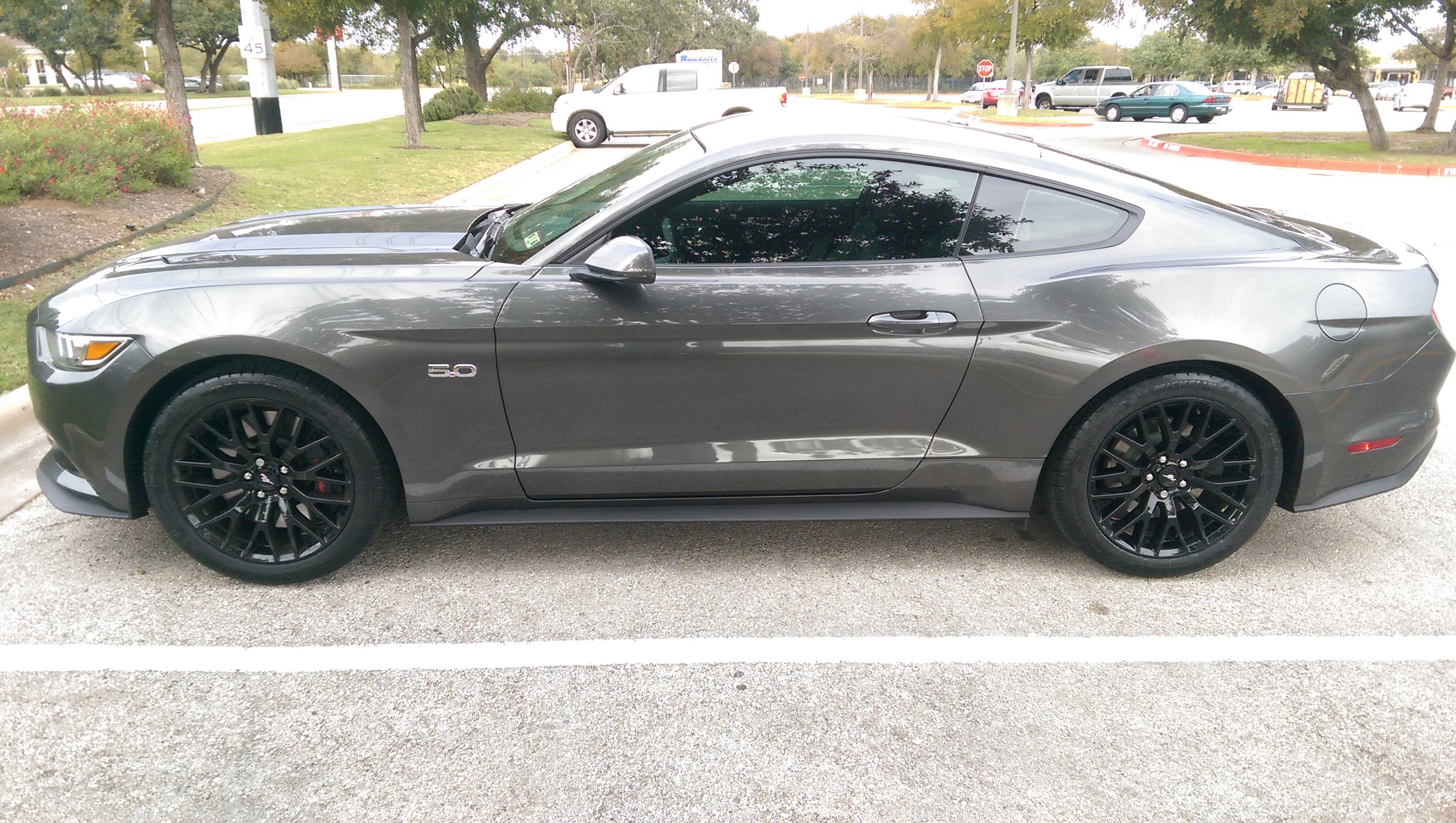 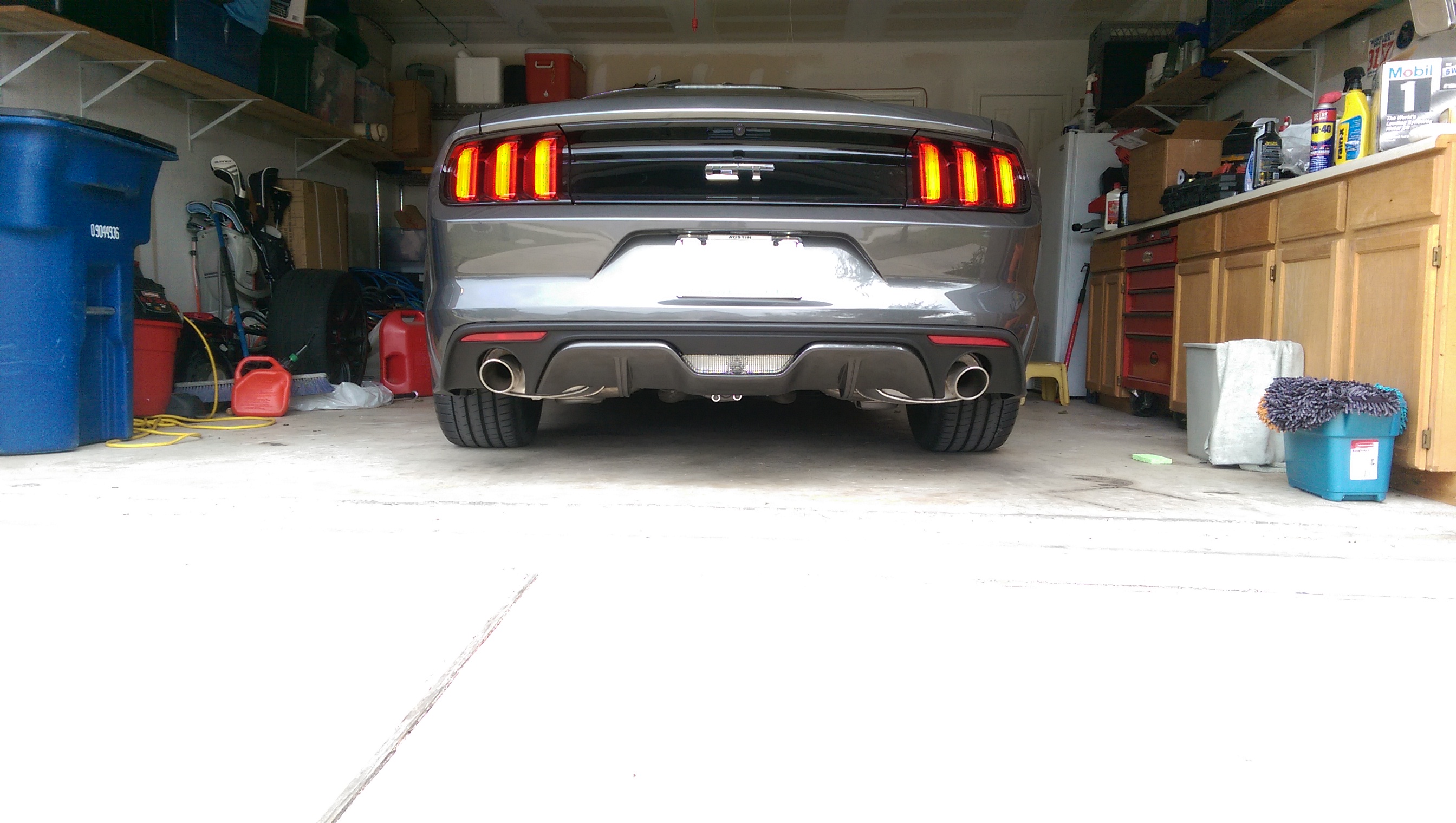 Wow! Dreamcar!
Any chance you'll do a video review or something?

I'll probably do a video when I get the exhaust done.

Now, I know there's some religious sentiment in this subject, but the 2015 Mustang GT is getting defeated by the Camaro in some reviews I've been watching.

This one for example https://www.youtube.com/watch?v=rTJPDurLEKw

There's also a tarck test where they put it up against a 2012 equivalent, and find no significant difference.

Of course that's just looking at performance. A lot of other stuff in the new pony has been improved too, so there may be other reasons to prefer it.

Yea, Ford always under-tires and under-dampens their cars for some reason unless you go with a Shelby or special edition car like the Boss 302. The Camaro in that test is the track version, the 1LE and comes with a massive tire and dampening advantage. It was designed for the track and that is where it excels. I went and test drove one before I bought my car and it's a turd everywhere except the track. Blind spots were terrible, my hair touched the ceiling, and the interior was straight out of night rider, and the ride was harsh. The plan is to go full adjustable suspension on my car so I can dial it in softer for the street and full up race stiff for the track. With proper tires and suspension the Mustang will obliterate the 1LE and be much better for day to day driving as well.

The comparison vs the 2012 was just a drag race. Ford moved to an independent rear suspension this year from a live rear axle. The IRS is heavier but will handle corners and bumps 100X better while the live axle is lighter and stronger for drag racing. The 2015 is ~100 pounds heavier but makes 15 HP and 10 TQ more so it ends up being a wash in straight line performance. I dont drag race so good riddance to live axle.